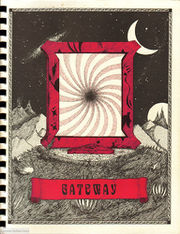 Gateway is a gen Star Trek: TOS anthology by April Valentine. The subtitle is "A Trek Universe Fanzine of the Macabre."

From an ad in Scuttlebutt #13: "It deals with Trek stories that are macabre, bizarre, whimsical, horror, melodrama, or fantasy. Does it have a twist ending? Could it be an episode of The Twilight Zone, Alfred Hitchcock, or Outer Limits? If so, it's right for 'Gateway.'"

Immortal Are the Dangers is a Gateway special edition, a novel by Elaine Romig, perhaps later published by ScoTpress.

There is extensive art in this zine. Below is a sample.

The theme of the fanzine was 'the macabre,' but it might be better defined as featuring the sort of story one might find on the television series, The Twilight Zone. One of the major reasons I bought the fanzine was its artwork. Signe Landon contributed a Kirk, Spock, and McCoy piece called 'Strange Visitors.' This was the first piece of artwork that inspired me to write a story—before this, all I could write in response to artwork was nonfiction analysis. (The story, "Footprints in the Sand," was later published in Masiform D.) Alice Jones, who had already won a Fan Q for her art, contributed 'Master of Dark Truth,' a Spock portrait, and Mary Stacy-MacDonald contributed a beautiful stylistic piece of Spock as Orpheus. [1]

If things that go bump in the night are your cup of tea...If TWILIGHT ZONE is still your all time second favorite show, rivaled only by NIGHT GALLERY, and if, given one person in history that you could meet in person—it would be a hard choice between Alfred Hitchcock, Edgar Allen Poe and Rod Sterling...If, of all of the kids at a slumber party, you were one of the last three to go to sleep, wanting not to take the barest chance that you would miss even one scary, weird or gory story... If you were the one who put the peeled grapes, neck bones from the butcher, jello and warm spaghetti noodles in that tub for the Halloween party-then this is the zine for you! And if you think that's great—try adding a large dose of the Trek universe to your cauldren and let it brew awhile. You end up with a virtual heaven of story possibilities. "Did I say heaven? My, my, how careless of me..." Some of the most—er—'creative'—minds in fandom put their artistic stamp on this zine. There were twenty-nine entries, by twenty authors (take your pick—it goes from Marie A. to Weston) and twenty artists (Carlson to Walske). The entries tended to be short for the most part, which I have said in other reviews usually drives me up the wall, but they were strangely satisfying. Maybe part of the charm of the macabre world is the sensation of having the rug jerked out from under you before you're quite ready for it. All of the pieces, without exception, were well crafted and well edited. I saw no typos, no verse my tongue tripped over, no scrunching, no spaces so large that I was tempted to be angry over having had to pay for them. There was no art that caused me to be embarrassed for the artist or to groan over it—but there were a few that I had to sigh (I don't drool— well, maybe only a little) over—like the Alice Jones illo of Spock entitled 'Master of Dark Truth'. You've got to see it. Or the Signe Landon illo of the trio that defies description but has an ambience that will take your breath away. Did I like it? Yes. I was not in the least sorry I spent the money. It was right up my alley, emotionally, intellectually and visually. (How else d'ya think I came up with that first paragraph?) I made two drastic mistakes in reading it, though. I thumbed through Nancy Kippax' 'When Darkness Comes', found it had none of the crew of the "Big E" in it (it's set in J. Emily Vance's 'All the King's Men' universe) and I didn't read it. Yesterday, in preparation for reviewing this zine, I read it. It turned out to be one of the most satisfying pieces in the zine—and now I have to beg, borrow or 'appropriate' (Thanks, Harry; I knew it would come in handy sooner or later.' ) a copy of that writing-and it's OP! (Beth, sometimes you are so stupid...) Anyway, that was mistake one. The second mistake was reading Gateway all in one day. Talk about 'sinister overload'! [2]

Gateway is a Star Trek fanzine containing short stories, poems and artwork by various writers and artists. It is a zine of the macabre, and therefore in most stories either Kirk or Spock dies a rather unusual death. A typical example is 'The Prey' by Ginna LaCroix where Kirk is killed by a space creature and Spock cannot help him and goes insane. 'To Rule in Hell' by Cheryl Rich is about Khan and Lt. McGivers in their exile on Ceti Alpha V and now would be considered to be an alternate universe story, but it was written before the premiere of ST II. My favourite (and perhaps the most macabre) in this zme is 'The Survivor', a poem written by Cathy Arsis. Kirk and Spock. crashed down with the shuttlecraft, and when several days later a landing party discovers them they only find Kirk and take him to sickbay. He tells in his shock that Spock. saved his life. " ...But I hate himt" McCoy wonders why he hated him and suddenly realizes ... but I don't want to tell you the end of the poem. You have to read it yourself. These are only three examples of the many stories and poems. I enjoyed the zine very much and I can recommend it to everyone who likes macabre stories. I like especially the cover as it looks as if it is three dimensional (at least I get this impression every time I see it.) [3]

GATEWAY is a one-shot fanzine containing Star Trek stories which are macabre or have twist endings. All entries are short or very short stories or poems. Unfortunately, the short length does not give the authors room to do more than deal with a variation of a standard macabre theme or try for a twist ending, and so many of the stories are not fully satisfying. But I must give [April Valentine] credit for trying something different even if it was not a resounding success. My personal favorite among the stories is "To Rule in Hell," a post "Space Seed" story. I always wondered how Khan and that gang of superheroes would manage, and how Lt. McGivers would fit in. She didn't, and here's the end of her story. Barbara Storey's Star Trek/vampire story "The Very Nearest Room" is also well-done. It's a reworking of the classic Dracula story on a newly discovered planet. Among the poetry I particularly enjoyed Cathy Arsis' epic poem "The Survivor", in which McCoy tries to provide Kirk with both physical and psychological aid when Kirk turns up as the only survivor of a wrecked shuttle originally carrying both him and Spock. The twist ending, though grisly, was most satisfying. Among the artwork, Alice Jones' illustration depicting Spock as the Master of Dark Truth is outstanding. The fanzine has a nice layout, and the print job is excellent. I enjoyed the poetry, which is a cut above average. I think the basic problem I have in reviewing the sine is that the contents are neither great nor ghastly, and it's hard to praise or pan the middle of the scale material. Unfortunately, the zine is quite expensive, and at that price I felt that I didn't enjoy it enough to recommend its purchase. [4] 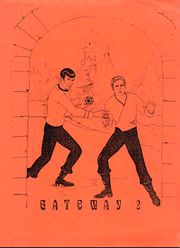 GATEWAY continues the tradition of GATEWAY I and is composed of stories dealing with the supernatural. Anyone who enjoyed GATEWAY I will enjoy GATEWAY II. My personal reaction was that some stories were good, others were interesting, but there were three or four stories I didn't understand (which may say more about me than about the writers). Since GATEWAY n has so many stories, I will concentrate on the ones that I thought were most outstanding. "Spell-child," by [April Valentine], is about Uhura and an enchanted doll. The story is subtle and well-crafted, and the characterization good. "Hoofbeats of Eternity," by Catherine Schlein, is a refreshingly different story. Scott senses the presence of a legendary horseman which represents death and believes that he hasn't long to live. Kirk recommends shore leave to cure Scott of his melancholy (not knowning the cause) and stays on the ship while Scott, Spock, and McCoy go to a forest retreat. From the start, the sequence of events — including the ending — are contrary to what the reader might expect, yet they all follow naturally from the premise. "Beyond All Darkness," by Maria Washburn, deals with Sarek's funeral and has a very good sense of place, culture, and mood. Although I expected a different ending, I thought that the story's imagery was clear and that the plot and characterizations were thoughtfully done. "Desperate Chances," by Laura Zipkin, has Kirk go through the Guardian to get Spock back after he dies and shows the consequences of trying to go back and change time to produce a different outcome. Any author who thinks that going through the Guardian is a quick, painless fix to undesirable circumstances should read this story. "Kirk's Pride," by Beverly Volker and Nancy Kippax, is one of the longer stories and shows what happens when Kirk inherits a haunted mansion. The story is told in diary form, from both Kirk's and Spock's points of view, and is quite effective. In short, as I said before, if you enjoyed GATEWAY I, you will also enjoy this issue. [5]

GATEWAY II is out. It is similar in content and these to GATEWAY I, so fans who found the first issue worthwhile will probably feel the sane about the second.

"Spell-Child" by [April Valentine] is about Uhura and an enchanted doll. The story is well-crafted and subtle, and has good characterization. "Hoofbeats of Eternity" by Catherine Schlein has Scott sense the presence of a horseman which represents death, so that Scott feels he hasn't long to live. Kirk recommends shore leave to cure Scott of his melancholy (not knotting the cause), and stays on the ship while Scott, Spock, and McCoy go to a forest retreat. This is well written and well characterized. "Beyond All Darkness" by Maria Washburn deals with Sarek's funeral, and has a very good sense of place, culture, and mood. Although I expected a different ending, I found the story's imagery was clear, and the plot and characterizations well done. "Desperate Chances" by Laura Zipkin has Kirk go through the Guardian of Forever to get Spock back after he dies on a planet, and shows the consequences of trying to change time to produce a different outcome. Any author who thinks that going through the Guardian is a quick painless fix to undesirable circumstances should read this story. "Kirk's Pride" by Beverly Volker and Nancy Kippax shows what happens when Kirk inherits a haunted mansion. The story is told in diary form, both from Kirk's and Spock's point of view, and is quite effective.

These were the major stories. There were other stories in GATEWAY II as well, but I'm sorry to say I didn't understand a lot of them. This may well be more the fault of me as reader rather than the fault of the authors, though. [6]

Immortal Are the Dangers is a Gateway special edition, a novel by Elaine Romig, perhaps later published by ScoTpress.