Side-Trekked is a gen anthology crossover zine. It was published in 1978 and contains 174 pages. 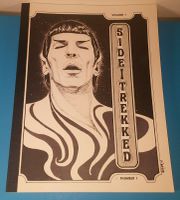 "The Second Issue"...Published Many Years Later

In 1980, the editor had this personal statement in Warped Space #44:

To update the situation on the delay of SIDE-TREKKED #1, first scheduled for publication in August of 1978, let me say that it has been a long legal battle to get it finished by my less than scrupulous printer, who accepted full payment for 600 and only produced 40. But, thanks to truth, justice and the American way, the courts have given an ultimatum to this Klingon, and have set the date of January 1980 for completion of the printing and binding of S-T #1, or I can execute my court decision and take everything he owns in retribution! So, for all those who have ordered SIDE-TREKKED #1, your wait is just about over. I'll be doing the mailing in January/February, and selling copies at the New York Con in February.

SIDE-TREKKED #2 is already being readied for the printers. I still have need of some artists, and could use a few short filler pieces (like poems or one-to-two page vignettes). Otherwise, SIDE-TREKKED #2 should be available in late 1980. Thank you all for your support and your patience. I'll never forget how kind fandom has

been through the trials associated with 'zine editing. Send orders, s.a.s.e.s. contributions to T. Kern

The zine, "Side-Trekked" #2 (retitled #1) was ultimately published in 1994, though possibly not in its original form. See Side-Trekked. 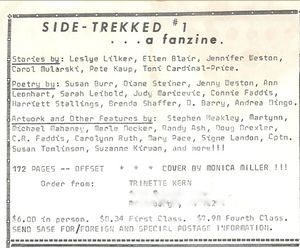 From the zine: "This issue is dedicated to the world of STAR TREK FANDOM -- ongoing and intricately diverse. May it live so long as the rivers run and the sun shall shine in the heavens."