Side-Trekked is a gen anthology zine with crossovers of Star Trek and other shows.

It is the second zine by this fan with the same title; the first one was published in 1978 and was also called "v.1." See Side-Trekked. 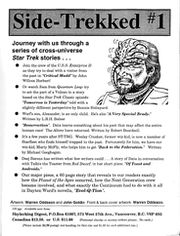 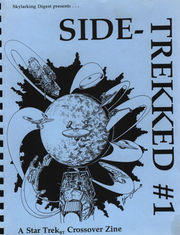 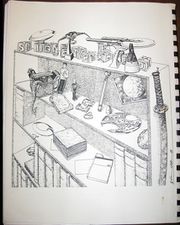 This zine was available "by hand" at August Party and Blimpcon [1].

At last! The first issue of SIDE-TREKKED is going to press! I know. . . I said it would be ready in May, and May is almost at a close, but you all know how it is with fanzines, especially those with a staff of one. . . an editor who must try to fit this love of Trek into his or her spare time. Invariably, issues are promised and then delayed as the events of every day life intrude on the time set aside for zine-publishinq pursuits. Sooo . . . . I thank you all for your patience, and hope that you will find this premier issue of SIDE-TREKKED worth the wait. I also thank those of you who donated your time in typing and other helpful projects to see this issue realized.