The Ballad of Hastur and Cassilda 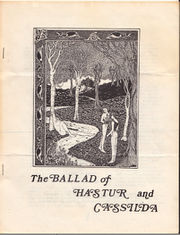 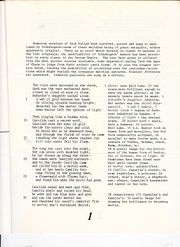 The Ballad of Hastur and Cassilda is a five-page epic poem/ballad by Marion Zimmer Bradley.

The front cover is by Terri Windling.

It was published by Thendara House and was later included in Legends of Hastur and Cassilda. It was also included in the Darkover Concordance.

In 1982, Bradley mentioned this fanwork in Marion Zimmer Bradley Discusses Influences of "The King in Yellow" and Accusations of Plagiarism.

It is possible that these characters were the subject of MZB's very first fanzine publication. In 1978, she wrote:

Back in my early teens I fell under the fascination of THE KING IN YELLOW and such strange names as Hastur and Cassilda, the lost city of Carcosa, the Lake of Hali, haunted my thinking for so many years that almost imperceptibly they slid into my own private mythos. Not until -- in high school -- I began studying Spanish literature did I realize where Chambers had found his "strange names." My first fanzine article (in a happily defunct hektographed format) was written to hint that "Casilda" is a well-known Spanish woman's name; that "Hastur" is probably a corruption of "Asturias" -- the only Spanish province never to surrender to the Moors and retain its ancient character... [1]

Numerous versions of this ballad have survived, quoted and sung to many tunes by folksingers—some of these melodies being of great antiquity, others apparently original. There is no proof which version is oldest or nearest to the lost, originals; the unreliability of folksingers' memory has been proverbial on every planet in the Terran Empire. The text here given is collated from the most ancient sources available, some apparently dating from the Ages of Chaos to judge from their archaic casta forms. It is also the longest version known, raising the possibility of accretions over the centuries—accretions which might explain the irregular metrical patterns. Stanzaic divisions are guesswork. Indented quatrains are sung as a refrain.