The Vaslovik Archives is a gen fanzine of fiction, art, poetry that focuses on shows Gene Roddenberry created.

The first issue has material from The Questor Tapes, Planet Earth, and Genesis II. The remaining issues are purely "Questor Tapes." 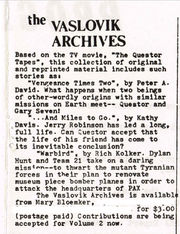 a 1976 ad printed in an August Party program book

Mary B's first published fanzine was The Vaslovik Archives, produced in 1976. Her partner in the venture was her lifelong friend, M.K. Davis. The focus of the zine was the other projects of Gene Roddenberry, but especially the 1974 pilot The Questor Tapes. Many of the submissions were from fellow members of the group that put on the historic August Party conventions, and included Gary 7 (from the Star Trek episode Assignment: Earth), and Genesis II/Planet Earth fiction and art. The zine ultimately ran 6 issues, plus a special edition collecting Peter A. David's Questor/Gary 7 crossover series, "The Devil's War. [1] 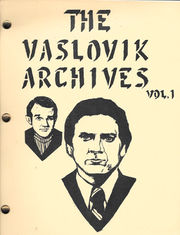 The Vaslovik Archives 1 was published April 1976 and is 62 pages long.

This zine was born, literally, out of frustration; the frustration of a Questor fan searching through stacks of Star Trek fanzines in search of the occasional Questor story. Herein are contained the fruits of my search, collected together for the sole purpose of saving other fen from the same frustrations. I hope you're happy, y'all!

Most of the stories are reprints from other zines, with a few original efforts thrown in for good measure. The inclusion of the Planet Earth/Genesis II stories was a purely arbitrary decision on my part. I felt that Gene Roddenberry's other efforts deserved the same recognition... and I'm fond of the little critters, besides. Readers will note the rather hopeful notation on the front cover, Volume One. Future volumes of The Vaslovik Archives will be possible only if contributions are forthcoming. Artwork and stories are gladly welcome, send them on, please!

Also, if anyone knows of a Questor or Genesis II story that has been printed in a zine and that I have managed to miss in this collection, please, please, let me know — we endeavour to make this the best, most complete Questor zine ever printed (to the best of my knowledge, that is).

I would like to thank Gene Roddenberry for the very encouraging nod he gave to the mention of a Questor zine when the subject came up in stray conversation. That one nod did more to speed this project on its way than any three circumstances together — thanks! 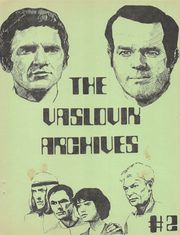 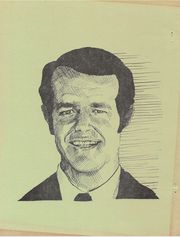 The Vaslovik Archives 2 was published 1977 and is 86 pages long. It was co-edited with Kathy Davis.

This issue is dedicated with much love and just a touch of exasperation to the following people: To Rick Kolker, for being quietly persistent. To Charles Heiden, for being loudly persistent and alarmingly prolific. To Paul Westerfield, whomever you may be. To Peter A. David, for being one in a million. To Ann Wigmore, for all that she's done. To Dale Jones, for being the person she is. To Rae Curtis, with all my best. To Mary Hartery, for the support when I needed it. To Carole Abbs, and most especially, her very special friend to whom I owe three very special days. Thank you. And not to be outdone, to the Co-Editor, Kathy Davis, who did what she could and wished she could do more, a very special thanks.

And to all the rest of them: Chris, Lisa, Pam, Tracy, Jacqui, Chuck, David, Carol, Pat, and Pat, Steve, Sharon, Vicki, Polly, and Evelyn.

And most especially, to GENE RODDENBERRY, for starting it all.

From the editorial by Mary:

Anyway, the reason this zine was not out on schedule was in part due to some shaky finances on my end and some stupidity on the printers end. Just when it seemed that "Vaslovik Archives #2 was nearing its completion, the printers lost six pages of original manuscript—and after two months of twice-weekly requests, they now deny that I ever gave them the pages to print in the first place. Since turning red and throwing fits all over the place wasn't exactly the most constructive way to get a zine printed, I then turned my mind to more practical alternatives, Retyping the pages in question wouldn't have posed much of a problem if it weren't for the fact that I had moved in the interim and the typewriter, a rental, was now about 400 miles away. The fact that you hold this zine in your hands at all—well, short of calling it a miracle, I would like to extend my heartfelt thanks to Gail Paradis for coming through and retyping the missing pages for me. It was a much needed helping hand— thank you.

From the editorial by Kathy:

This time I pleaded infirmity instead of insanity and let Mary do the typing. Which is why there is so little art in this volume — by the time I kicked her out of my apartment at night her hands were too numb to draw. I never knew how she could type with that many fingers anyway.

So, with the fragrance of Wite-Out in my nostrils, with yards of carbon-ribbon spaghetti overflowing my wastebasket, and the incessant hum and staccato rhythm of a rented IBM Electric filling my living room, this fanzine came to be.

Like I said at the completion of Volume One — one of us has gotta be crazy.

And may the Baltimore Orioles win the pennant this year. 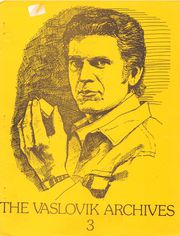 The Vaslovik Archives 3 was published 1980 and is 51 pages long. The art is by Mary Bloemker.

This issue was edited by Mary Bloemker and Kathy Davis. 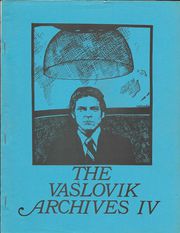 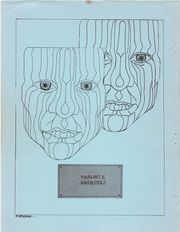 back cover of issue #4, Deb Walsh

The Vaslovik Archives 4 was published May 1981 and is 84 pages long. This issue was edited by Bloemker, with Davis listed as "administrator emeritus."

The art is by Mary Bloemker and Deb Walsh.

After five years and four issues of The Vaslovik Archives, I am still constantly surprised at the fierce loyalty of the fans of an innocuous little TV movie called The Questor Tapes. Sure, when Kathy Davis and I thought of putting a one-shot zine together, comprised of reprints of Questor stories scattered throughout Star Trek fanzines, we thought we might be able to sell a few copies. Our first surprise was when Peter David offered to contribute an original Questor story to the effort (ah, Peter, what would this zine ever do without you? Don't try it!); our second surprise was when the zine sold out of the first printing within three months. After that, the surprises came fast and furious, the latest one being that I actually got this fourth issue out when I said I would. (Don't faint, I left the smelling salts in my other purse.)

For those of you whose interest might have been piqued by the reference on the contents page to the Administrator Emeritus, and whose curiosity might have been aroused by the brief, deliberately enigmatic reference to my ex-Ko-editor's illness in the editorial in Issue #3, I will explain a little whether she wants me to or not. The idea for the Questor zine was jointly ours — basically, we supported each other in our madness. Madness, yea, verily it was, since neither of us had the slightest idea of what on earth we were doing. Kathy did the majority (something like 95%, I believe) of the typing on Vaslovik #1, primarily because she had the spare time, and I couldn't type to save my life. A college typing course took care of the latter as far as I was concerned; as far as Kathy was concerned, well, two things conspired to separate the future issues of VA from her involvement. One, I moved 400 miles away, and two [...] 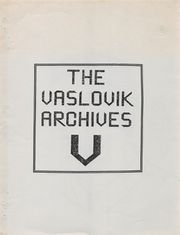 The Vaslovik Archives 5 was published April 1985 and is 50 pages long.

Veterans may note the new format; this is one reason for the delay. Ever since being introduced to computerized word processing, I found it increasingly difficult to cope with even an IBM Selectric II and all the tedious typo corrections. It seemed as though every time I spent three hours painstakingly correcting proofread copy, twice as many typos would miraculously make an appearance. This can get pretty discouraging after the third or fourth session.

I finally threw all caution to the wind (and my budget out the window) and sprang for a home computer around Christmas. This entailed retyping everything, of course, so that added to the delay. But it all seemed worth it when the printer spit out.the entire zine in less than ten minutes, picture-perfect! 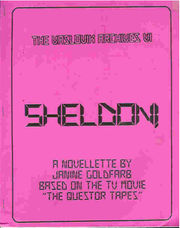 The Vaslovik Archives 6 was published 1987 and is 42 pages long. It consists of the novelette Sheldon.

From July 1993 GAZ: "Contains the novellette "Sheldon" by Janine Goldfarb. Questor is convinced that his purpose on this planet, to aid mankind, can best be served by employing and training a brilliant young man with an unfortunate employment history, owing to a more unfortunate tendency toward excessive clumsiness. Jerry Robinson, on the other hand, is convinced that his android friend and colleague is missing a few gears. Both of them are in for the surprise of their lives'."