Avatar is a gen multimedia zine edited by Mary Hartery, the successor to Starfleet Annals.

It contains both non-fiction and fiction, and Roberta Rogow's first published fan fic was in issue #3.

This zine series contains the first to feature Space:1999 stories and artwork.

The zine series folded after the fifth issue was supposedly stolen on the way to the printers, but it is more likely that the zine ed lost interest in the series, was disheartened by the cancelation of Space:1999, and likely didn't want to disappoint her fans and tribbers with that reality.

Issue #1 and #2 were Starfleet Annals. 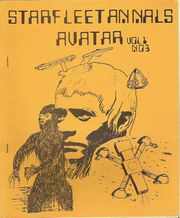 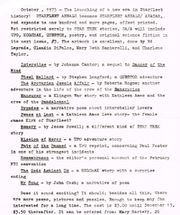 Avatar 4 was published in July 1976 and contains 144 pages. The front cover is by Mary Bloemker, the back cover by Ed Laprade, the interior illos by P.T. Carnehan, Patrick Kelley, Harry Lang, and Lee Pappas. Linda Satkus was also a staff member and typist. 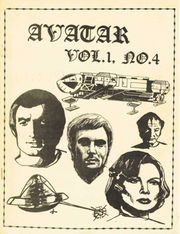 cover of issue #4
The editorial:

Well, here I am again, with one of my brilliant editorials, to convey to you some opinions that are mine alone, but if you like them, I'll let you share them.

My topics this time are varied as usual: TV executives, movies, dolphins, SPACE:1999, and whatever I think of along the way.

TV executives: My opinion on network executives is very low.

My favorite show of the year was Harry 0, and some a—h decided to cancel it, even after Anthony Zerbe won an Emmy award for his supporting role. What is the matter with these so-called experts, who mostly are self-proclaimed and are tolerated by the viewing audience? If enough people agree with me, perhaps a giant letter campaign to fire a few select "members of the board" would do the trick. At least it might put a scare into some of them. Wishful thinking?

Movies: Considering my financial situation at times, it's a modern wonder how I even get out to see a movie nowadays. There really isn't much sf out: Logan's Run, The Man who Fell Earth; forthcoming, and without total promise. I've heen to see THE MAN WHO WOULD BE KING, and DOG DAY AFTERNOON, and I was quite impressed. Certainly not sf, but very entertaining. If there is still a chance you can catch either one, do so. You won't be let down.

Dolphins: Finally, there has been a law passed to protect our dolphin friends. Considering what intelligence these creatures possess, it was an unforgivable sin to kill these animals, even while it wasn't done purposely. At last politltians are heeding the wishes of the public.

SPACE:1999: What can I say about a series that has made me form a club, and work diligently on making a success? Nothing much, except to mention the name of Nick Tate, who plays Alan Carter on the series. If it wasn't for Nick, I would have written SPACE:1999 off as a total failure. Let us just hope Nick stays with the series as long as it's available.

Fandom: Without fandom, we suffer. Without the circuit of friends joining together at Conventions, without fanzines, without clubs, without an ideal, we would he forced to live without fantasy, without a change of pace, without our dreams taking form. What a dull place that would make the world.

What laws are there against taping TV shows or movies, or taking pictures from them? I'd like to know the exact laws regarding this, as to whether the taping and photography themselves are illegal, or whether it is the selling of such tapes and pictures that is illegal.

That's it for this editorial. For now, anyhow.

Avatar 5 was to have been published in November 1976 and "contain those endings to the serials of #4."

Avatar #5 will soon be available. 135 pages of artwork and some of the neatest typing Stephen Sandberg has ever done, not to mention many interesting stories about UFO, SPACE:1999, and what have you.

For those of you wondering whatever happened to Avatar #5, there is some bad news. On its way to the printers, it was stolen, along with Mary H's briefcase and other items of value. It's been some weeks now, and the hopes for recovery have dimmed considerably. Avatar #5 is in the process of being reconstructed from scratch. Mary is willing to refund money to anyone who does feel they want to wait any longer. There may be some added surprises in this issue to add to what has already been done, and #5 promises to be the best issue yet. Command Center will keep you up to date.

Actually, it is more likely that the zine ed lost interest in the series, was disheartened by the cancelation of Space:1999, and likely didn't want to disappoint her fans and tribbers with that reality.