It is the successor to WARPed MIND which had ceased about four or five months earlier.

It is very likely that there were only one issue published. 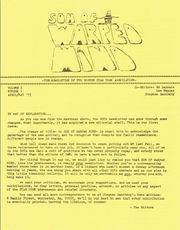