Sometimes characters are shown holding them, and in the case of one Blake's 7 zine, the characters themselves are portrayed as teddy bears. 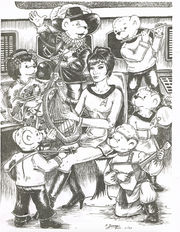 Star Trek's Uhura with what appear to be "Hokas." The artist is Sharon A. Young, the illo was in Diverse Dimensions #5 (1984).

Teddy Bears in fanworks may have their start in a much older, science fiction tradition, as "Hokas" created by science fiction writers Poul Anderson and Gordon Dickson. "Hokas are disunited and – childlike. They have a hard time taking anything seriously. Worse, they cannot distinguish between fact and fiction, and the IL’s serious manuals on good government are ignored in favor of the more exciting Earth fiction: Westerns, pirate sagas, jungle ape-man thrillers, and so on." [1]

For any newer fans who may be a little confused at the abundance of costumed teddy bears floating around older fandom, as toys looking like everything from Blake's Seven crew to Conan the "BarBearian" to Princess Leia, or as cartoons in older printzines, a short explanation of the madness follows: Hokas were born in a short story published in the science fiction magazine Other Worlds Science Stories in 1951, the product of the collaboration between science fiction greats Poul Anderson and Gordon Dickson. They became such beloved creations they went on to books, some of which may still be in print and are well worth a hilarious read. Highly suggestible teddy bear-like inhabitants of the planet Hoka, these charming beings not only accept human "cultural contamination", they REVEL in it. Whole sections of population throw themselves into their storylines and characters with such gleeful zeal, they can quickly build Londons to fit Queen Victoria's age or a medieval Paris complete with cathedral for their own version of the Hunchback. Since they also have a happy disregard among literature, old movies and real history, they are as likely to have Sherlock Holmes present at the Battle of Trafalgar ... held on Thursdays ... as they are to decide being Foreign Legionaires are more fun next month. On a diplomatic visit to Earth, "Disraeli" can become "Don Giovanni" after a single state visit to the opera. All of this single-minded enthusiasm makes them rather the "Ultimate Fans". As such, fandom embraced them as mascots and Hokas turned up in every fandom that arose. The small drawings of Star Wars Hokas scattered through this issue were first drawn as column headers for one of the first Star Wars letterzines, "Jundland Wastes".

M*A*S*H: Radar O'Reilly has a teddy bear which he loves very much.

Star Trek: TOS: In the Star Trek: TOS episode "Journey to Babel," Spock's mother Amanda describes his childhood pet, a sehlat, as being similar to a "fat teddy bear."

Starsky & Hutch: In the Starsky & Hutch episode "Starsky's Lady," there is a sweet and caring BOTW named Terry Roberts, who has a teddy bear named Ollie that she keeps on her bed. Knowing ahead of time that she is going to die, Terry writes a note to Hutch entrusting him with Ollie... and Starsky. She adds that he should "love them both." Ollie the teddy bear shows up in many S&H stories, both slash and gen, [2] either as a main character (in stories such as "Ollie's Thoughts--Thoughts from the Teddy Bear" in the zine "Ties, and Tough Love" by TLR) or simply getting a mention in stories such as Justice by Sue David and Valerie Wells, or Memory's Ashes by Susan Proto.

Doctor Who: When Steven Taylor makes his first appearance, he has been trapped on the planet Mechanus for two years with only his toy panda bear, Hi-Fi, for company.

One Direction: The Rainbow Bondage Bear is an elaborately dressed-up teddy bear featured on-stage during most of 1D's shows in 2014-2015. His companion Sugar Baby Bear (a smaller version of RBB) later joined him on stage.

Garfield has Pooky, which has appeared in the strip going back to 1978.

Enjoyed the "Ten Reasons to Avoid Reading AUs," although I must point out that the teddy bears (cf. Reason #5) do have sex in at least one story, albeit between the lines. I believe they were watching their counterparts from on top of a wardrobe and became inspired. It was actually a rather funny story, until nineteen others appeared on the same theme and teddy bears of Vila in black leather became a sales-room staple. Perhaps teddy bears serve a deep-seated need in some segment of fandom (as slash does in another, overlapping segment); those overcute stories came flooding out onto the circuit, ill-spelt, ungrammatical, totally without plot devices let alone plots, as though the mere whiff of an idea had opened a long-pent gate of desire in their authors' minds and hearts and had impelled them to writing-like activity (you know, as in "cheese-like filling") regardless of talent or experience. That much output indicates a real interest, revolting as it is to some of us. Just what the real interest is (since it certainly isn't Bodie and Doyle, or even sex), I'm not sure. [3] 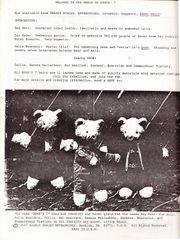 Blake's 7 bears for sale, from a 1987 flyer by Bearly Spaced Enterprises, click to read

Some fans made teddy bears in the likeness of certain media characters.

A fan in The K/S Press #53 (2000) talks about “custom bears” that one could purchase: “I have a good friend who makes custom bears in all fandoms, all with attached furry balls and penises. She would make a Kirk and/or Spock bear for you WITH or without the ‘private equipment.’ Actually, she can make the ‘family jewels’ and put them on elastic so you can choose whether or not to make your bears adult… An individual bear with uniform BUT not private parts is $35. The ‘family jewels.’ whether attached or on elastic are $5 extra.”

In the Ger Bear Project [4], Brenda F. Bell dressed six teddy bears in clothes based on costumes worn by actor Geraint Wyn Davies in various roles he had played on Forever Knight. The bears were dubbed Klaus Bearsing (Klaus Helsing in Dracula: The Series), Nicholas B. Knight, Nicolas de Bearbant, Bear of Harps, Beartual Reality, and Nick Bearskill (Nick Haskell from Black Harbour). Except where noted, the bears' clothes were based from costumes from Forever Knight episodes. Three of the bears were donated to the Geraint Wyn Davies Fan Club to raise money for charity.

A fan makes a con purchase. From The K/S Press #13: "I am now the proud owner of the Vulcan Teddy Bear I've read so much about in The K/S Press. Very handsome he is too, with his pointy ears and fuzzy black hair. I treasure him, both for himself and as a memento of this wonderful con, and try not to wonder about where he hides his six-inch fangs."

There are a lot of fanworks which portray or describe Blake's 7 Kerr Avon with teddy bears. Read more about the origins of this custom at Avon's Teddy Bear.

There are many in the Star Trek fandom, specifcally for Spock, something that is probably a nod to a sehlat being described as a large teddy bear with fangs.

Frank Spotnitz, an X-Files writer, was involved in a fan-run charity action called the 2009 Frankenbear Worldwide Tour[5], where a stuffed teddy bear named after Spotnitz was sent from all over the world from one X-Phile to the another to raise money for the UCLA-Santa Monica Rape Treatment Center'. Frankenbear's last stop was in November 2009, where the bear was given to Spotnitz together with a scrapbook[6]. The action originated by XFilesNews and the fan group SkypePhiles.

Many fanworks feature the Blake's 7 character, Kerr Avon, with a teddy bear. A fan explained how this became a Blake's 7 meme:

Once upon a time, Sheelagh Wells told Paul Darrow she'd figured out why Avon never smiled-- someone had taken away his teddy bear when he was a little boy. She then presented him with a small (about 4" sitting, tan) teddy bear. It sat on his dressing table for a while, but eventually disappeared (Sheelagh had taken it back on the sly), and the subject was dropped. It may have made a brief appearance later (just to be sure he remembered), but I'm not sure. Then, during the filming (taping?) of "Terminal", in the scene where Avon and the injured "Blake" are having their little chat, "Blake" says (approximately) "Be careful, Avon, your sentiment is showing," and as Avon is about to respond, a small tan bear (_the_ bear) slowly rises above the edge of the table behind Blake's head. Paul Darrow cracks up, big time. The bear has made an appearance at Scorpio when the blooper reel was shown, so we've met (he's cute). This story is also told on the audiotape "Blake's Back," available from Horizon, on which Gareth Thomas and Paul Darrow relate many stories about the series. The bear can be seen peaking out of Thomas's shirt pocket on the cover photo. [7]