Fandoms: Star Trek, Batman, Doctor Who, Elfquest, Enemy Mine, The Last Starfighter, 2001, Planet of Apes, Conan the Barbarian, The Twilight Zone, Battlestar Galactica, and others. 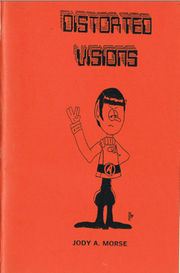 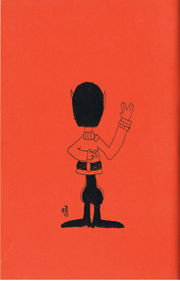 back cover of issue #1
From the editorial:

The Webster Collegiate Dictionary defines a parody as "a literary or musical work in which the style of an author or work is closely imitated for comic effect or in ridicule." This definition just doesn't cut it for me. Then again, what can you expect from a publication that defines love as "a zero score in tennis"?

Well, while comic effect figured predominantly in my writing of these works, ridicule was the farthest thing from my mind. Who am I to scoff at such creative giants as Asimov, Roddenberry, and Serling? I am but a follower and they are the Masters. Then again, why take them too seriously? If imitation is truly the sincerest form of flattery, then I pray that the Masters will feel suitably flattered by my efforts.

So, you ask, how did all this get started? (Well, ask anyway! Thank you.) Well, it began many, many years ago, when I was but a wee lad (although in truth I'm still fairly wee to this day). Humor has always held a certain fascination for me. After discovering the joys of the Final Frontier, thanks to reruns of "Star Trek", I began to think of how I might twist the idea around for the sake of a good laugh. That's when I came up with the idea of a space ship manned by a crew of Intergalactic Garbage Collectors. I patted myself on the back (a rather difficult maneuver and one which I do not recommend) for my ingenuity.

A few months later I learned about a new situation comedy that was in the works called "Quark", featuring a spaceship manned by a crew of--you guessed it--Intergalactic Garbage Collectors.

So much for ingenuity. I began thinking logically (again a difficult maneuver that I wouldn't recommend), to wit: "If I'm a dismal failure at coming up with new ideas, it only follows that I should be a tremendous success at revamping old ones." So I took up a pen (this being before the coming of the Great Compaq Deskpro 286) and created my first parody. I haven't looked at science fiction (or indeed the mundane world) in quite the same way since.

This issue differs from the first in that the fics are longer, and "serious" crossovers. The cartoons, however, are similar. 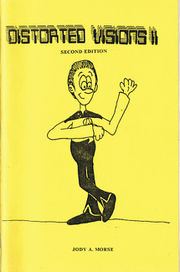 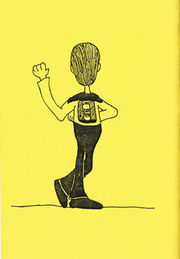 back cover of issue #2
From the editorial:

As I write this, nearly a year has passed since the premiere of the first volume of "Distorted Visions" (DV for short). That year has seen a lot of changes, not only in DV, but in my mundane life as well. When I was preparing DV #1 for press, I was unemployed, depending on the kindness of strangers (a great line, by the way, from "Streetcar Named Desire"), and quickly developing a cynical eye on the world. Today, I make a good living as a word processor for a major Beverly Hills bank. I've moved into my own apartment, which is now decorated in Contemporary Fandom- This year I also participated in my first ever art show at TimeCon in San Jose. I was heartened by the warm reception my cartoons received. Needless to say, other convention art shows were soon to follow. Look for my displays the next time you attend a Southern California con.

Along with these changes came a minor attitude adjustment. Though I still prefer to look at fandom through polka-dotted glasses, I no longer feel the need to resort to parody in order to achieve a humorous effect. Besides, I'd just about exhausted my supply of satires in DV #1.

With this in mind, I began to make plans for a second issue of "Distorted Visions". There would be no parodies this time. What then was I to use to fill these theoretical pages? The answer came in a letter from a fellow fan, who read a "Star Trek/Max Headroom" story I'd written in one of the many fanzines to which I've contributed over the years. Her comment was "I enjoyed the story very much. Do you have plans to write any more cross-over stories?"

My first response was to say, "Sure." Then, upon proper reflection, I asked, "Like what?"

Distorted Visions 3 was published in 1990 and contains 68 pages of cartoons (no fics or vignettes) by Jody Morse. Fandoms include: Star Trek: TOS, Star Trek: TNG, Who Framed Roger Rabbit, Beauty and the Beast, Batman, War of the Worlds, Alien, Indiana Jones, Alien Nation, Pern, and Conan the Barbarian. 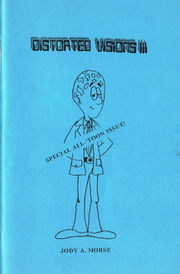 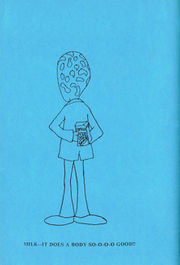 back cover of issue #3
From the editorial:

Closer to home, I had the opportunity to display my artwork (for lack of a better word) at several conventions, among them TimeCon, BayCon, and LosCon (Con-fused?). The response was gratifying (both financially and critically). Suddenly, I became a human 'toon machine, producing my "one-paneled wonders" at a rate that amazed even me (and, brother, I ain't easily amazed!). When it came time to start seriously (?!) planning this latest installment of what has become an annual 'tine, I was astonished (having already been amazed) to find that I now had enough 'toons to fill an entire issue all by themselves! Hmmm, an intriguing idea, I thought. And so "Distorted Visions III: the 'Toon Odyssey" was born! {Dramatic, hokey music builds to a climax, then slowly fades out 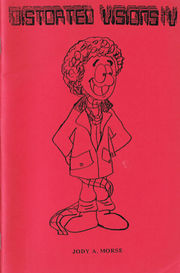 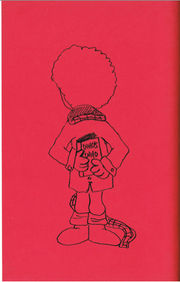 This issue is much like issue #2: stories and cartoons.

Welcome back to "Distorted Visions"! You hold in your hands the fourth in a series of unusual fan publications devoted to ail things bizarre, unusual, or just plain silly. Volume One (which, by the way, is now available in a crisper, easier-to-read edition—plug!) started out as a parody fanzine, with me poking fun at "Star Trek", "Elfquest", "Conan", "Batman", and other classics of science fiction and fantasy. Volume Two (which is also available in a crisper, easier-to-read edition—plug! plug!) contained some really out-of-this-world (not to mention out-of-this-dimension) cross-overs, allowing the crew of the original starship ENTERPRISE to meet such intergalactic zanies as Dr. Zaius, Alf, the Greatest American Hero, Conan, and Marvin the Paranoid Android. Scattered throughout those earlier issues where samples of my twisted art work (what lesser mortals have seen fit to label "cartoons"). The response to these was so great that I decided to produce a whole volume of 'toons, which became "Distorted Visions III: the 'Toon Odyssey". If you're a regular reader of this 'zine and have a sharp, analytical mind, you will notice that "DV IV" contains a cross-section of those earlier collections. Within you will find parodies, cross-overs, and of course cartoons. If, on the other hand, you are new to these pages, congratulations! You now have a virtual "sampler"!

Once again, it's time to pay the piper (and the drummer, the bass player, the strings...). Thanks go to fellow cartoonist, Melody Rondeau, for her praise and encouragement (not to mention her buying some of my "masterworks" at conventions). It's nice to know that I'm not the only one out there who derives great pleasure from tugging on Superman's cape, spitting in the wind, and dropping Data's drawers! I'm also most grateful to Kristine and Dennis Cherry, the die-hard editorial staff of "General Quarters", the newsletter of the L.A.-based Star Trek club, the U.S.S. ALLIANCE. Any improvement in the appearance and content of DV can be largely attributed to the shining example of this most excellent periodical. Like the page borders? I stole the idea from Kris and Dennis. And they haven't so much as threatened legal action! Friends indeed! 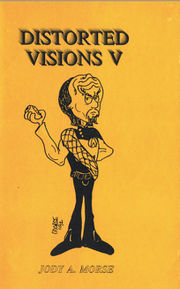 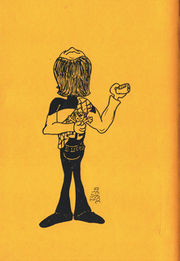 back cover of issue #5, Worf and a teddy bear

This issue has the same format as issue #4.

The nature of the universe is duality. There is heat and there is cold. There is good and there is evil, And, yes, there is laughter, but there are also tears. In the midst of making merry, we must sometimes stop and reflect soberly on events of the day. Since the publication of the last issue of DISTORTED VISIONS, a lot has happened in our world. We've fought a war, and in its aftermath we were once again reminded of the words of Benjamin Franklin, "There was never a good war, or a bad peace." Following the verdict in the Rodney King beating trial, the melting pot known as Los Angeles boiled over and a once great city was transformed in a matter of hours into a lawless jungle.

Saddest of all is the fact that all of this misery occurred within a year of the death of two of the most optimistic "men of the future." Twenty-five years ago. Gene Roddenberry introduced us to a positive tomorrow, a universe in which men and women of all races and backgrounds lived together in peace and in the quest for knowledge, to explore "the final frontier." That vision was, of course, "Star Trek." Like millions of others around the world, I will miss this gentle idealist, but I will also rejoice in the many hours of pleasure and wisdom he gave to me.

The name of Isaac Asimov has become synonymous with science fiction, and with good reason. He was perhaps the most prolific and versatile artist in the field. His "Robot" series of stories are well-known to anyone with even a rudimentary exposure to fantastic literature. It was he who first coined the term, "the positronic brain." His Three Laws of Robotics is regarded as gospel by a vast majority of science fiction writers. In addition to a veritable library of great science fiction short stories and novels, Asimov also produced a multitude of non-fiction books covering everything from biology to history to Sherlockian limericks. Asimov was one of my favorite authors. With his death, Earth has lost one of its most valuable natural resources.