Elfquest is a graphic novel series created by WaRP Graphics, first published in 1978, depicting a race of elves known as Wolfriders set in the World of Two Moons, a world later called Abode by its inhabitants. Almost the entire run is available online at the Complete Digital Elfquest Online; what's missing is the original black and white edition, and parts of the WaveDancers spinoff that are caught in copyright conflicts.[1] 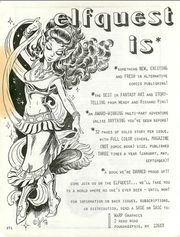 1981 ad for the graphic novels printed in Pegasus #5 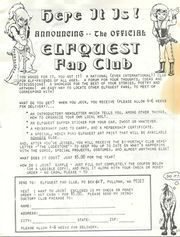 In 1984, Chaosium Games released the Elfquest Role-Playing Game, and there was also a boardgame put out by Mayfair games.

The comic has appeared in many forms over the years.

The first issue was part of a magazine called Fantasy Quarterly, which was printed in black and white. The company failed immediately after the first issue was published. There is a lengthy description and review of this magazine (and "Little Number One") in Yearnings #1 (1982).

After that, Wendy and Richard self-published, printing the first twenty issues in an over-sized black and white format, and later printing Siege at Blue Mountain in a smaller-sized comic-book format, though still black and white, which continued until the publication of Hidden Years in the 90s, when they began to print the issues in full color. [2]

After the first five issues had been published, Wendy and Richard decided that they wanted to show their fans how Elfquest looked in full color, so they worked with Donning/Starblaze to have them made into a full-color graphic novel. After that, for the rest of the twenty-issue run, Donning would bring out another graphic novel for each five-issue set. Once the first four books had been released, a special edition featuring all four books in a leather-bound volume was offered, though these were very limited in quantity and hard to come by, even at that time. These original graphic novels are no longer in publication as Donning is no longer in business, and they are very difficult to come by.

After Donning went under, Wendy and Richard set up a branch of WaRP Graphics called Father Tree Press and subsequently released a number of books, including reprintings of the first four graphic novels, and two new color graphic novels of Siege at Blue Moutain, soon followed by more graphic novels of the succeeding stories.

They also began to publish books--at first just novelizations of the first four graphic novels, but then they started an anthology series about Cutter's ancestors, titled The Blood of Ten Chiefs. Several volumes of stories were released before they stopped publishing the series. The stories were written by many fantasy and science fiction authors of the late 80s and early 90s.

After the comic industry crashed, WaRP pulled back on most of their products, and made simpler black and white versions of the stories that existed so far, and a few that had not been published to date.

For a full listing of the comics and graphic novels, see the article Decades In Print at Elfquest.com.

While in the planning stages, Elfquest went through many versions before becoming the elves that exist today.

The biggest change, though, was to a character well-known and very well-loved by the fandom: Skywise. Originally, Skywise was going to die soon after the second part of the quest started.

At one point, Wendy told Richard about a particular scene where a thief tries to take something from Skywise. Originally, her intent was to have the thief drag him over the cliff as he falls, and that Skywise and Cutter would get one last chance to say goodbye as he hangs there by a root. (Issue #9) [3]

When she began to tell Richard more about the character, though, she mentioned Skywise's main character trait at the time--his fascination with the sky. Richard, who is an amateur astronomer, immediately said "He's my Elf. You're not going to kill him." And the rest was history. [4]

The Elf Tribes and Others

There are four "official" tribes in the main storyline, though a few more have been recognized over the years in various ways.

At the beginning of the story most tribes have no clue the others even exist.

The Elfquest Role-Playing Game also suggested Desert Nomad Elves, though none have been used in any official capacity, unlike the sea elves (WaveDancers) or plains elves (Plainsrunners).

The High Ones: Not a tribe in the way the others are, but a collective name for the original group of elves who arrived on Abode, and from which all elf tribes are descended.

The comics themselves have many tropes woven into the fabric of the story, but some stand out more than others as fan favorites.

I'm sure there are others I'm forgetting, but that's a good start.

Fans reacted so well to Fantasy Quarterly #1 that Wendy and Richard knew they had to self-publish the rest of the series, and it has been the fans' reactions that have kept the series going for so long.

Fan response has always been encouraged by the couple. Their letters page was always full of conversations between the couple and their fans, and the two visited as many conventions as they could to spread knowledge of their series far and wide. It worked. Not only has the comic been published by WaRP Graphics, but it was also republished by Marvel Comics in the 1980s, gaining them an even wider audience than before, and then later reprinted by DC Comics in the 2000s. The comics have also been translated into many languages over the years, including Danish, Norwegian, French, and Russian.

Though the comic found an immediate fanbase, there was some backlash from the more mainstream comic collectors, who were used to all comics being in color at the time. Many felt that it suggested poor-quality work. Despite this initial impression, Elfquest continued not only to finish its initial run in black and white, but two subsequent series as well, all of which were eagerly accepted by the fan base.

Elfquest's success despite this backlash led other small companies to spring up, leading to a boom in black and white comics for a time.

Though there had been moments of violence and sexuality in Elfquest before the fifteenth and seventeenth issues of the original series were released, few expected anything darker or more blatant than what had come before. When there was, there was a massive backlash against the creators for both issues.

The death of a major character in issue fifteen signaled a darkness to the books that many parents had not been expecting, despite the warnings that Wendy and Richard had made at the beginning of that issue. With issue seventeen adding a more adult spin to the story than had been seen in preceding issues, many people refused to continue reading, incensed by the sexual subject-matter.

Fan clubs were often called "Holts," after the Wolfriders' name for their home in the forest. Club members often identified themselves by nature-based elf names, and tree- or leaf-based names for club newsletters were common. Most of these Holts tended to focus on fan-made characters or tribes over the elves or tribes from the books.

Web rings allowed clubs to find each other online.[5]

List of Elfquest Fan-Created Holts gives the names of known holts, including links to webpages, if those are available.

Elfquest had two official mailing lists, one for all discussions (EQUEST-L) and one specifically for posting and discussing fic (FANFIC). Both seem to be defunct now, although there are (currently broken) links to the archives on the official Elfquest website.[6] An Elfquest Usenet group, rec.arts.comics.elfquest, is no longer active but available as an archive.

Scroll of Colors, the official Elfquest forum, is currently active.

An entire album of Elfquest filk, A Wolfrider's Reflections, was authorized by WaRP Graphics[7]. Several other filksongs have been written about the world of Two Moons, including Heather Alexander's Wolfen One and Joey Shoji's (forgotten title). The first fanzine, Yearnings, contained several filksongs.