Wendy Pini (nee Fletcher) is the creator and artist of the comic book series Elfquest.

She was born June 4, 1951 in California, where she was adopted by the Fletcher family. Her artistic side was encouraged from a young age, which started her on a love of fantasy that eventually led her to comic books in her teenage years. [1] 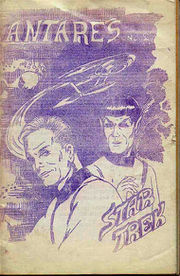 Of notable incident was a letter she wrote to Stan Lee about an issue of Silver Surfer, where she took him to task for his portrayal of characters in that issue. The letter generated many responses from other readers, including one Richard Pini. The two began a long correspondence, and eventually they married in 1972.[2]

As a fan of fantasy and comic books, Wendy attended many conventions both before and after her marriage to Richard, and continually tried to break into the comic book industry.[3]

Inspired by the movie Wizards directed by Ralph Bakshi [4], in 1977, Wendy began to develop what would eventually become Elfquest. She and Richard set out to find a publisher for the idea. [5]

The first issue was published in 1978 as a part of Fantasy Quarterly #1, but the failure of the publisher meant that Wendy and Richard had to publish on their own, or let it die. [6]

The fandom response to that first issue was so great [7] that the pair decided to create a company they called WaRP Graphics (for Wendy and Richard Pini), and began to self-publish the series. [8] While the comics were never a huge money-maker for the couple, they did quite well, and the comics have been translated into many different languages around the world.

The series itself expanded well beyond the original story she created. The first story was told in black and white in twenty issues from 1978 to 1984 that were then re-published in color in four full-colour graphic novels. Two years later in 1986, they published a second series called Siege at Blue Mountain, which was immediately followed by a third series, Kings of the Broken Wheel. After that, a number of series about the elves of Elfquest sprang up, but the publishing collapse in the mid-nineties caused them to pull most from production after only a few years. For a full list of the Elfquest publications and dates, go to the List of Elfquest publications at Wikipedia.

Wendy still does art today, though not as much as she once did, sharing the spotlight with others as much as she takes up the pen herself. She and Richard still travel to conventions, and someday hope to see Elfquest on the big screen.