Timberlake Sendings is a gen het ElfQuest anthology of fiction and art.

Timberlake Sendings 1 was published in 1983 and contains 98 pages. 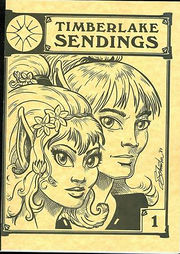 Sometimes the fan version of something makes you appreciate the pro version all the more. In this case, I mean the fluid art and clean, powerful storytelling of Wendy and Richard Pini in their Elfquest series. Sadly, though the fans here are terribly sincere, they are also sincerely terrible. The art of TIMBERLAKE SENDINGS is adequate though sparse, but the storytelling is amateurish even by fannish standards.

The stories are all set in the same universe: Timberlake Holt, stomping grounds of an undiscovered group of elves. Evidently they suffered a diaspora about a generation ago, and have been ingathering after having moved to a new locale. The timeline and overall history are not simple to figure out, for the pieces in TS are mostly about individual members, who are as mutually distinguishable as beans in a barrel. In Elfquest itself, the characters are unique and have unique appearances; in the zine the characters all act alike, talk alike, look alike, and are named alike--Moonshadow, Moonflower, Moonstar, Starseeker, Starsinger, Sunsong, Sunshadow. (There is actually a character named Wingnut. Probably has a cousin named Lugwrench.) Blessedly, Pam Spurlock drew a sort of diagram to indicate who's who and what's what, but in the stories it's perilously easy to lose track.

As one might expect, the stories are overloaded with interruptions by way of said-bookisms (strained substitutions for the word "said": "he breathed out," "he grated") and manic point-of-view switches. Combine a shifting pov with indistinguishable characters and you get narrative that s impossible to follow vis-a-vis who is saying, thinking, or feeling what. This, incidentally, is why there are commonly agreed upon rules in writing; off the young author flubs characterization, at' least a consistent pov will save her storyline. Most of these "stories" are formless, even pointless fragments, as if they were scripts for dreams based on Elfquest. They lack the details and coherence typical of things meant to be read. A common device in these pieces is to haul in subordinate storylines as tales told or memories recalled, which would be okay except most of the time the author then forgets to wrap up the enfolding plotline, as in "A Warrior" by Nikki Wieleba and "Quarry" by Sharon Denomme, Sometimes the plot is simply abandoned and the story ends at a brick wall, as in Linda McLachlan's "Searching," and Michael Lichon's "Big Surprises Come in Small Packages," and editor Diana Stein's "A Tale of Timberlake."

Only two stories pay off the effort needed to read them, "Progressions" by Roy Veldboom, and "The Vastdeep Way" by Daniel Honaker and Dian Hardison. "Progressions" has a plot--a much-abused elf flees from captivity among trolls and is gently introduced to life in an elf holt--and is adequately written. Veldboom's only weakness is a penchant for useless suspense. His pov character, Night Howler, comes across the little elf, and successively postulates that he is 1) a pile of rags, 2) a human, 3) a troll, and finally, after shaking loose the kid's hand, is so paralyzed by shock at the sight that it takes him five minutes to be paralyzed for another five minutes by shock at the sight of the kid's ears. '"By all the High Ones I' Night Howler slowly breathed out. 'He's...an...elf I'" Surprise, surprise.

By contrast to everything else in this zine, "The Vastdeep Way" is actually good. A family of elves has occupied an aquatic ecological niche, with dolphins instead of wolves, eagles, or reindeer, and they are joined by a lost land-lubbing elf, who Recognizes with the daughter. The best of the story is the joy that comes across clearly in the writing: "Saltwind exploded up through the surface of the deep blue-green water with force enough to lift her slender body out of the ocean. She fell back, arms spread, with a resounding splash." That's excellent writing--the reader sees, feels, and hears the action. The authors create a fully appointed world for the sea hunters, with claw-crawlers for food, a lone rock island for shelter, "wave-dancers" (dolphins) for companionship, who are "almost beyond our understanding, sometimes." Honaker and Hardison reach Coward the highest goal of fan writing: to create, through emulation of the pro work, something original. In this case, water-elves as interdependent on their dolphins as Cutter's tribe are on their wolves.

The art in TS, particularly by Pam Spurlock, Sandy Schreiber, Paulie Gilmore, and guest-artist Wendy Pini, is better than the usual in a first zine--no Mary Sue floating heads with wheelspoke-iris eyes. The downfall of the graphics is the typescript: silly spellings ("He reached for his stomic"), rampant typos, and run-together words ("The wolves would be more thanhelpful, lookingafter the elves as the two groupstraveledintotheun-known together.")

Timberlake Sendings 2 was published in 1984 and contains 122 pages.