Yearnings is a gen Elfquest anthology. It has at least four issues. 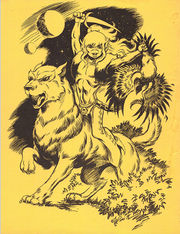 back cover of issue #1, Wendy Pini
Regarding the copyright statement in the first issue, the Pinis apparently had no hesitation in enabling fans to claim independent copyrights in fanworks.

Yearnings 1 was published in 1982 and contains 132 pages. It has cover art by Wendy Pini & Jane Fancher.

Excerpt from the inside cover:

You will notice on the table of contents page … that we call this magazine “The ELFQUEST Companion.” Why? Good question.

A couple of years ago, we started up the Elfquest Fan Club in order to address a need that we saw developing within Elfquest fandom. We found that, inspired by the world and characters created by Wendy and Richard Pini, readers of Elfquest were in turn creating their own elfin characters and locales, and writing about and drawing them. Several budding authors and artists had already sent their efforts in to WaRP Graphics for Wendy and Richard’s comments. We decided that a Fan Club would be the ideal sort of forum for these “adaptive” creators to show their works to other Elfquest fans.

Once the Fan Club got going, we found ourselves on the receiving end of a minor deluge of fan-generated fiction, poetry, and art. Some of it dealt direclty with the characters found in Elfquest magazine, some of it dealt with other, “what if” elves living on the EQ world, and some of it had nothing to do with Elfquest at all. A great deal of it was surprisingly good. We realized that we could never hope to showcase even a fraction of this work in the Fan Club newsletter, The Lodestone. And so we decided to try our hand at publishing a new magazine — one composed almost entirely of stories, pictures, songs, poems and so on contributed by the readers of Elfquest. It would be, indeed, a companion magazine to the Elfquest comic, a companion full of alternate fantasies and realities, a companion that might stimulate yet other readers to creativity.

…. Because several of the pieces in YEARNINGS deal with Elfquest-type characters — either the ones already in the comic or others in different parts of the Elfquest world — there is a natural temptation to think that perhaps these stories and so on represent “reality” in the EQ universe. We hope you see that this can’t be the case — otherwise chaos would result from all that input — and that these works should be thought of as “what if” stories. Only Richard and Wendy know what does and doesn’t exist in their nameless world.