Magnetism is a 191-page slash multifandom fanzine that was published in Australia.

Just a Twinkle in Her Eye

The original editor, Sharon F, wrote to Hanky Panky in 1982:

I'm accepting submissions for my own zine, “/” of course. I don’t have a clue where to advertise to get some overseas writers to contriubute. I’ve only gotten Australian writers so far. The zine will be male/male: K/S, S/H, The Professionals, and any other type one want to submit, any length. The Professionals story I have dibs on looks like it will be a novella. If I get enough like this, I’ll put out separate zines instead of just dividing it into sections, as it is planned at the moment… I’m still trying to think of a name for my zine. Does anyone know of one or two words that have a definition of something like this: The force that attracts one to another; the force that holds the universe together? [1]

The Delay, and the Mail

From a personal statement in 1985:

When MAGNETISM finally made it to print, we were faced with a difficult situation...the zine was way overdue; postage and production costs had increased in the meantime and not only was the zine broke, it was very much in the red. So, a decision—a very poor one as it turns out—was made to send all overseas copies Surface Air Lift (SAL). SAL is supposedly a halfway house' between Air Mail and Surface... been better off using Surface, at least as far as North America is concened... As we understand it, most copies mailed to California have already arrived and copies are starting to trickle through to the East Coast...so all is not lost (or confiscated by Customs...we devoutly pray)... Hindsight is a wonderful thing...if we had known in May about the problems with SAL to North America, of course, things would have been different. As it is, we can only extend our sincere apologies to contributors and subscribers for the delay and implore your patience for just a while longer. Thank you.[2]

In January 1986, a fan commented on the massive delays, change in responsibility, and scolded another fan for bad-mouthing this zine:

I wonder if you meant to sound as nasty as you did. Last time I saw Karen Lewis she was still ALIVE and well, still working hard, and still trying to work out why she bothered at all to try and pick up the shreds of Magnetism as it had been and see if she could at least get it printed and out to the people who had paid for it and contributed to it three years ago. It wasn't even her zine -- or her mess -- but she put a LOT of time, effort and money into making something out of one of the biggest disasters since Pompeii. By now (the Post Awful and SAL willing) you will have a copy of the zine. You will have to let us know if it was worth alienating one of this fandom's hardest-working members. I certainly hope that other Aussie fanzines won't suffer because of Magnetism. It would be foolish for anyone to condemn a whole country because of one bad zine.... I am still buying zines from the US despite the fact that I am still waiting for zines I paid for over four years ago. [3]

Late 1988, I bought an Australian multi-media zine called Magnetism. The lead story was an alternative universe with Bodie & Doyle as mercenaries. I was totally confused about how this fitting in which what little I knew about the fandom, but it immediately won me over. [4]

How I discovered the Profs? Being a slash nut, I'll read anything slashy I can lay by grubby mitts on. The multimedia slash zine Magnetism was therefore a godsend (all 190 pages of it). Thanks to editors Sharon F and [the two Karens]. And Meg Lewtan's a/u Profs story in it. "Out of the Jungle, really got me intrigued. I read a few more slash Profs stories here and there after that, which kept me interested. But then they started screening the show itself here in January 1990... [5] 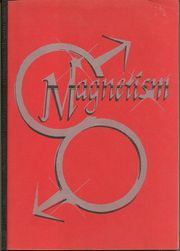 See reactions and reviews for Out of the Jungle.

[zine]: Having heard the details behind its incredible birth and life, I must say that my hat is off to Karen Lewis for taking on such a behemoth and then following through to get it out to the people who'd bought and paid for it. I wonder if people realize that had it not been for Karen, it is very likely that the zine would NEVER have appeared; or that if it had, it wouldn't have been anywhere near as good a zine as it was! [7]

[zine]: While it's a "good-looking" zine, and put together very nicely—and while the B/D section was top-notch, especially "Out of the Jungle" — I thought the rest of the zine was about average, and the S/H stuff In particular looked as though it could've been better edited.[8]

[zine]: The first story I read of [Meg Lewtan] was in Magnetism, and, along with the story by Anna Vie in the same zine, I have her to thank for kindling my interest in the Professionals in the first place. [9]

Late 1988, I bought an Australian multi-media zine called Magnetism. The lead story was an alternative universe with Bodie & Doyle as mercenaries. I was totally confused about how this fitting in which what little I knew about the fandom, but it immediately won me over. [10]

[Discoveries]:"...interesting and sort of poignant little bit where it looks like Doyle probably will not fully recover from getting plugged in the heart. I have trouble with her picture of this very fragile, gentle-spirited Doyle, but I'm fond of Jane's stuff for whatever reason."[11]