Karen Lewis was an Australian Star Trek fan, based in Sydney. She was active in literary science fiction and SF media fandom circles throughout the 1970s, 80s and 90s, and was well-known to attendees of the monthly ANZAC House screenings of Star Trek episodes, where Karen organised the refreshments and coordinated many fundraising events. Karen and her helpers were often seen at local and interstate conventions, Doctor Who fan events and other costumed gatherings. 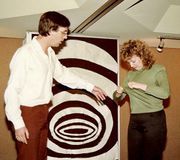 Karen convened the first major Star Trek convention in Australia, AussieTrek, in 1979. AussieTrek 2 followed in 1980. In 1986, she helped to coordinate the Time-Warped convention, its costume parade and a live game show, Tribble Lotto.

Karen was a key member of Harpic Productions, co-writing and performing in numerous convention skits and thematic opening and closing ceremonies. She appeared as the Andorian, Tharrah, at numerous gala movie premieres and in the award-winning Australian fan films, Sale of the 23rd Century (1985) and Perfect Botch (1986).[1] Among her other popular cosplay identities were Wonder Woman, Supergirl, Sue Storm (the Invisible Woman of Fantastic Four), and Athena from the Green Dimension (Lost in Space).

In 1984, Doctor Who fandom was featured on the Australian TV current affairs program, Willesee (Nine Network). The UK's Janet Street-Porter interviewed fans, including Jeanne Little and her daughter, Katie, while Karen organised the catering. In 1990, Karen was interviewed about Star Trek fandom on an episode of TV's Couchman,[2] which examined Australian fan groups and pop culture.

Karen mentored many amateur fanzine editors over the decades and was a life member of Astrex, the Star Trek Fan Club of NSW. She often signed off on her fannish communications with the letters, "E.B., A.P.", continuing a in-joke based on separate overheard comments made by her rivals. The letters stood for "Empire Builder, Always Planning". Karen passed away in September 2021.