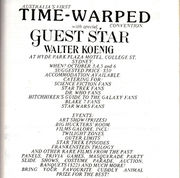 In 1988 [sic, actually 1986], entrepreneur Bob Johnson mounted a professional convention, Time-Warped, with Star Trek actor, Walter Koenig as Guest of Honour. It was staffed by non-paid Star Trek fans, but did not make enough money for Mr Johnson to consider financing another one. [1]

The opening ceremony of Time-Warped featured a Harpic Productions' skit with Doug and Tony, of television's The Time Tunnel. They arrive in 1986 Sydney, Australia, just in time for a science fiction media convention. Colleague Ann twiddles some knobs on her console but is unable to assist them.