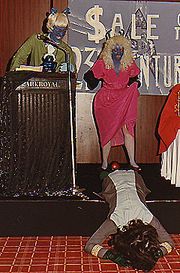 Harpic Productions was a fan film troupe from the Sydney-based Australian Star Trek club, Astrex. The Harpic team first formed to present a game show parody, as a programmed skit at Con Amore convention, held in Brisbane, Queensland, in 1985.[1]

Sale of the 23rd Century

The popular television quiz shows, Temptation, Great Temptation and Sale of the Century, were the templates for the live game show's format.[2] Andorian hosts of Sale of the 23rd Century were Therin (Ian McLean) and Tharrah (Karen Lewis), with hilarious assistance from "gift shop" hostess, Tackee the green Orion slave girl. One such gift was "a piece of the Enterprise".[3]

Contestants were chosen from the convention attendees by way of an entry form that encouraged creativity. Garfield Barnard, Robert Luxford and Carol Bott were selected to compete.

The skit was videotaped by the convention committee, then slightly edited and expanded back in Sydney, with additional closeup scenes and opening credits. (The "Harpic" name came from the Andorian blue color of a popular UK/Australian brand of toilet cleaner, as a result of a series of in-jokes on the day of editing.)

This 1985 parody game show was performed live, and videotaped for posterity, at the annual Astrex Christmas party. Based on the popular TV version, Graham Kennedy's Blankety Blanks. Starfleet Blankety Blanks was hosted by Grol the Tellarite (Ian McLean) and Tackee the green Orion slave girl. The winning contestant was Zena Beardsmore.

Doug and Tony, of TV's The Time Tunnel, arrive in 1986 Sydney, Australia, just in time for a science fiction media convention. Ann twiddles some knobs but is unable to assist them. Timewarped was a skit that doubled as the opening and closing ceremonies of Time-Warped convention.

Harpic Productions' next game show parody was performed live at Time-Warped convention in Sydney. Perfect Botch (1986) was a parody of TV's Perfect Match (aka Blind Date). Members of the Fantastic Four - Marvel Comics' Mr Fantastic, Invisible Woman and Human Torch - hosted, with Tackee the green Orion slave girl, and then The Thing, as the mystery dates for selected audience member contestants. Traditionally, on the original dating show, a video package shows the result of a previous episode's blind date. For this segment of the parody, a pre-taped fan film showed Star Trek Vulcan characters, Spock and T'Pring, on their beachside honeymoon to La Perouse, and was played on TV monitors. Therin and Tharrah of Andor were the wacky chaperones.

"As you can see by the Andorians' windblown appearance, it was a miserable day for the beach. When we wrote the script, we set the action at Manly Beach - but the day we were supposed to go turned out to be a huge Surf Carnival, so we went to La Perouse instead, because it was close to the editing suite we were going to be using in the afternoon - and suddenly all the French and Greenpeace gags started to write themselves![4]

This skit was performed live at the Time-Warped Convention banquet. Tribble Lotto was based on the "Chook Lotto" segment of Australian TV's Hey! Hey! It's Saturday! A blindfolded contestant, Lana Brown from New Zealand, randomly pushed numbered tribbles from a wine rack, while audience members (including the convention's Guest of Honor, Star Trek actor, Walter Koenig and his family), played along with a standard "Bingo" ("Lotto") grid. A "supplementary glommer" (from Star Trek: The Animated Series) substituted for the actual show's "supplementary duck". Hosted by "The Greatest Australian Hero" (Ian McLean) and Athena, “the Girl from the Green Dimension” (from Lost in Space).

By popular demand, CometCon Blankety Blanks used the sets and props created for Starfleet Blankety Blanks and given new life as programmed entertainment at the 1986 Astrex Minicon. Hosted by Strop the Visitor (Ian McLean) from the Sydney Mothership (from V) and Tackee the green Orion slave girl.

The character of Maltz the Klingon (from Star Trek III: The Search for Spock) starred in the 1987 fan film, Free Maltz! Loosely based on a premise by Lana Brown, as featured in an issue of Katra: The Living Spirit, this short comedy production showed Saavik helping Maltz (Ian McLean) to escape from his Vulcan prison cell to stow away on the "USS Bounty", time travelling with that Klingon vessel and Kirk's crew to 20th century Sydney, Australia, via San Francisco, USA.[5]

Free Maltz! served as the opening segment of another live game show at 1987's Eccentricon. Maltz was the compere/host of The Nearly-Wed Game, based on TV's The Newlywed Game (formerly The Marriage Game). The game show featured the convention's Guest of Honor, Brian Croucher. The concept was to pose questions to SF media couples who "nearly wed". Mr Croucher reprised his Blake's 7 character, Travis, opposite a local Servalan lookalike. Other pairings were Zaphod Beeblebrox and Trillian (Hitchhiker's Guide to the Galaxy) and Admiral James T. Kirk and Dr. Gillian Taylor (fresh from the movie Star Trek IV: The Voyage Home).

The skit Cooking with Strop was suggested as a programmed event by Susan Smith-Clarke and Gael Williams for 1987's Eccentricon. Strop (Ian McLean), a Visitor from the Sydney Mothership, selected a seemingly hapless audience member, Neil Hayden, and proceeded to explain efficient and delicious ways "To Serve Man", using the Kanamits' infamous cook book from The Twilight Zone episode. As can be seen by the photographs, the human was one Strop "had prepared earlier".[6]

While Fan Guest of Honor at New Zealand's ConVERGE convention in 1988, Ian McLean cosplayed as DC Comics' The Flash to host It's in the Beg!, a parody of a quirky New Zealand TV game show, It's in the Bag.

In 1990, this skit was essentially the making-of film Paramount was never game to let William Shatner actually direct, and on a shoestring budget even less than Star Trek V: The Final Frontier. Ian McLean played producer Harve Bennett in Star Trek 5.5. Robert Luxford was the SPFX guy with no money to spend. Performed live at an Astrex meeting in Matraville, Sydney.

The troupe's final performance was in 1990, at an Astrex meeting in Sydney. See The Naked Never for details.