His film marathons were presented beginning in the early 1970s (1976?) [1] to the late 1980s in Melbourne, and until 2000 in Sydney, and were an important part of keeping up Australian fan interest in Star Trek: The Original Series during dry spells between the official movies.

Initially six episodes per month, and later five episodes (and a bonus Star Trek: The Animated Series episode), the day included two intermissions. Johnson always had huckster tables, where fans could buy badges, t-shirts, photos, and other collectibles. Members of the former AussieTrek conventions, and committee members of Astrex fan club, provided drinks, sandwiches and jaffles at the Sydney events. Buying and selling could be brisk during the intermissions, as was the fannish networking. At some screenings each year, a "Market Day" enabled other fan groups and clubs to set up tables as well. These happenings resembled a typical minicon. 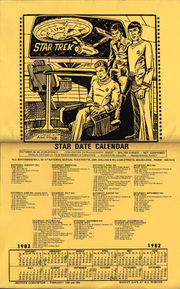 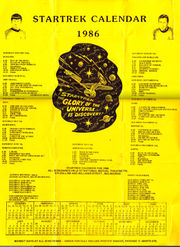 Bob Johnson also ran Time-Warped, a for-profit convention in 1986. As a fundraiser for the convention, he also organised and promoted a "Great Stream Train Adventure", with science fiction media fans in cosplay, travelling from Central Station, Sydney to the Thirlmere Train Museum.[2]

On non-Trek weekends, Johnson's Sydney venue would host theme days for screenings of "The Twilight Zone", "The Outer Limits", serials (such as Leonard Nimoy in "Zombies of the Stratosphere") or cult films (such as "Reefer Madness"), making use of the extensive catalogue from his firm, Educational Film Services.

An important figure in the history of Australian Star Trek fandom is Bob Johnson. Johnson was an entrepreneur who lived in Melbourne and screened films in both Melbourne and at ANZAC House in the heart of Sydney. Most of these films were cult horror and B grade science fiction, and were shown to small but enthusiastic audiences who did not mind the poor quality of the films being shown. His films were purchased from South Africa where they were sold to families who lived in places that could neither receive television [3], nor access cinema releases. In the late 1970s, Johnson purchased a number of Star Trek episodes on 16mm film from South Africa and started to screen them in marathons of three or four episodes. These marathons attracted a large number of Star Trek fans and the local clubs were encouraged by Johnson to publicise his marathons and hold their meetings or set up information tables in the foyer or nearby his cinemas...

Johnson used fan volunteers to staff his own sales tables, where he resold items purchased from Lincoln Enterprises. He also used fans to act as ushers, and to sell food at the marathons. Inside the cinema, fans would recite whole scenes or ad lib funny lines, and cheer at well-loved lines in the episodes; the atmosphere warm and engaging. The fan clubs benefited from their relationship with Johnson, even though the legality of the marathons was often questioned, with Johnson receiving more than one letter from Paramount instructing him to cease the showing in public of the episodes that he owned. However, because they were legally purchased episodes, he was never forced to stop showing the episodes.

Johnson’s influence in Sydney and Melbourne fandom cannot be ignored. He resold legal Star Trek merchandise; he aired episodes of Star Trek publicly; and he made a profit from fans whilst freely using their services, their support, and their networking capacity to advertise his activities. He also fostered the continued interest in Star Trek during the dry years between the finish of the original series and the airing of Star Trek: The Next Generation, and actively encouraged the fan community, by bringing together fans and encouraging clubs and artisans, as well as fanzine editors, to use his foyer for their tables of sales and information, and to use the showings as club events. [4]

Mainly, that it wasn't Bob Johnson who created the Marathons. Johnson owned the 16mm prints, and once he knew they were money-makers, continued to screen them to the end of his life, but the idea was someone else's.

The 16mm prints, indeed, did come from South Africa, and, although they did look like tv broadcast syndication prints, as mentioned, there was no tv broadcasting in SA until the mid-70s. Johnson's prints were on Eastmancolor stock, and, clearly, had been produced in the 1960s. These prints, likely, came from SA film exchanges, which would hire them out to the public to run on their home 16mm projectors - this practice was very popular in South Africa, right up until the arrival of television there.

The execution of the first Star Trek Marathons, beginning in the 1970s, at the Ritz Cinema, in Errol Street, North Melbourne, used Bob Johnson's resources, but the idea was created and curated by another man - a local film-maker, artist, and Star Trek fan. I don't even know if Bob Johnson liked Star Trek, beyond the money that it made for him...

Further, Bob Johnson never cleared the rights to screen these films in public, and never paid a penny to the copyright owners, Paramount. Perhaps Bob Johnson is a 'historically' important figure in Star Trek fandom, but he could/should also be, equally, described as a notorious figure in film exhibition. [5]