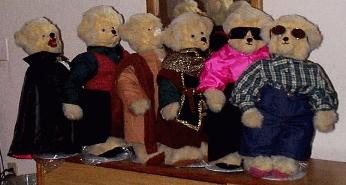 In the Ger Bear Project, Brenda F. Bell dressed teddy bears in clothes based on costumes worn by actor Geraint Wyn Davies in roles he had played on Dracula: The Series, Forever Knight, and Black Harbour. She originally intended to do a set of twelve bears, but only completed six.[1]

Three of the bears were later donated to the Geraint Wyn Davies Fan Club. At their third "Weekend With Ger" a/k/a "Gerthering", the actor met and signed one of the bears during the autograph session, auctioned off a second one, and received a third as a gift. Another bear was auctioned off in one of their internet auctions.

In 1997, Brenda created an eponymous website, The Ger Bear Project, to memorialize the teddies. The main page of the website includes a brief description and a group photograph. However, each bear also has its own individual page which describes the costume and includes photographs of the various stages in which the bear was dressed. There is also an additional page of photographs.

What do you do when you're a fan of an actor with hair the color and texture of distressed mohair, and the face of a teddy bear? If that actor is known for his generosity and kindness to others (noted teddy bear traits)? The Ger Bear Project is one fan's attempt to create a small series of teddy bears in the image of this actor, the multitalented Geraint Wyn Davies ("Ger") and dress them in costumes from some of Ger's roles.

Four of the bears are dressed in versions of specific costumes from Forever Knight episodes, while the other two are dressed in more generic costumes associated with the characters Wyn Davies played previously in Dracula: The Series and later in Black Harbour.

[T]he bears were designed as "artist bears" (I created the patterns from scratch). They are fully jointed using locknut joints, include fur shaving and soft sculpture techniques to create a look similar to Ger's face, and also used German glass eyes. Unlike a traditional artist bear, these are done in synthetic fur (as opposed to real mohair fur, which was beyond my budget) and stuffed with polyester fiberfill. I want to say they weigh about a kilogram each, but they may be a bit closer to four pounds (I really crammed as much fiberfill into each bear as I could fit, which was necessary for the limbs to try to support the bears and to have enough resistance to do the soft-sculpture on the heads). The group photos were done using teddy bear stands (like doll stands, but with a wider opening to accommodate a bear's wider waist). - Brenda Bell, e-mail[2]

To depict the character of Klaus Helsing from Dracula: The Series, Brenda dressed a bear in a "movie-traditional" vampire style, with a white cotton dress shirt, black wool slacks, and black opera cape lined with bright red acetate satin.

The page about this bear, "Vampire Crazy", includes four photographs of the creation of the bear: undressed, in pants, in pants and shirt (with the focus on the latter), and complete with cloak.

To depict Nick Knight in modern dress as he appeared in several episodes of Forever Knight, Brenda dressed a bear in black slacks, a dark button-down shirt, and red waistcoat with a tapestry-type design. In one paw was placed a miniature wine bottle, representing the character's "special stock" of bottled cow's blood.

The page about the bear, "Knight Moves", includes three photographs of the creation of the bear: undressed, wearing shirt and slacks, and complete with waistcoat and bottle.

This bear was donated to the fan club to raise money for the club charities.

To depict Nicolas de Brabant, as he appeared in scenes set in 1228 at the time he was brought across, Brenda dressed a bear in a costume based on the one worn by Geraint Wyn Davies in the episode "Killer Instinct": a white chemise, a beige tunic, and an open, sleeveless burgundy robe. It also carried a miniature wine bottle.

The page about the bear, "Coming Across", includes four photographs of the creation of the bear: undressed, in chemise, in chemise and tunic, and fully dressed.

Brenda kept this bear for herself. Geraint Wyn Davies signed the left lower paw in gold Sharpie, which has faded over time.[3]

To depict Nicolas de Brabant, as he appeared in the flashback of the episode "Queen of Harps", Brenda dressed a bear in the costume worn by Geraint Wyn Davies in an outdoor scene where he is on horseback. This includes a white chemise, a dark green tunic, a short-sleeved burgundy overtunic, a riding tabard with gilt braid trim, a "chainmail" helmet, leather belt, and sword.

This bear was given to Rosemary Shad, founder and president of the Geraint Wyn Davies Fan Club.[4]

To depict Nick Knight as he appeared in the episode "The Games Vampires Play", Brenda dressed a bear in the costume worn by Geraint Wyn Davies while "inside" the virtual reality game, i.e., black slacks and shocking pink shirt, along with the goggles that he wore while playing the game. Again, the costume included a miniature wine bottle in one of the bear's paws.

The page about the bear, "Games Vampbears Play", includes four photographs of the creation of the bear. Two show the undressed bear, one being a close-up of the face. One shows it in slacks and goggles, while the final one adds the "evil pink" shirt.

"Beartual Reality" was donated to the Geraint Wyn Davies Fan Club to raise money for the club's charities. It was sold through an internet auction. Several years later it was auctioned off again to raise money for another charity.[5]

To depict the character of Nick Haskell from Black Harbour, Brenda dressed a bear in a typical costume for the character: plaid shirt and denim blue jeans. The costume also included a wristwatch and RayBan sunglasses ("for driving his blue Mustang convertible down the sleepy streets of this Atlantic Coast town").[1]

The page about the bear, "Black Harbear", includes four photographs of the creation of the bear. Two show it undressed; one shows it in plaid shirt and sunglasses; and the last shows it fully dressed, with jeans and watch.

An additional photograph on the page shows the creator, Brenda Bell, with the actor. He has his right arm around her, and "Nick Bearskill" in front of him. The bear was presented to him as a gift.[6]

During Forever Knight War 10, Brenda wrote "Nicolas de Bearbant" (the bear she had kept for herself) into some of the war posts she wrote for the faction with whom she was playing, the Celtic Glow Worms. The fictional version is not only a cuddly-looking animate teddy, he is a fanged blood-drinking vampire, who swears a lot and eagerly attacks anyone he thinks he can feed from. This "vampbear" was introduced in Brenda's arriving-in-Toronto post.[2]

Of anything I expected to see in The Fiendish Glow's office, he was the least likely. A two-foot tall, sandy-brown bear-like creature with open mouth and visible fangs, dressed in something that looked like it came from a Nick Knight flashback. Actually, the costume was from a video depiction of a Nick Knight flashback, since I had designed it that way two years ago.

How the vampbear made it up to Toronto (ahead of me, no less!) was only the second of my questions -- why he was there was the first. Sensing my annoyance at the presence of two kilograms of fake-fur and polyester stuffing, Pen broke the ice for us:

"He was packed in with the box of clothes that came up for you from New York... something about, umm, Forever Knight and teddy bears and he needed to be here during the War and..." she rubbed absently at her forehead and blinked hard, trying to remember something.

From the looks of this, getting information wasn't going to be easy -- and I had a sneaking suspicion why. I roughly pulled the vampbear off the desk and looked him straight in the eye. "You didn't try to whammy her, did you?"

The bear looked back innocently, but silently.

"Or feed on her?" I asked, not believing his innocence in the matter for a nanosecond.

The vampbear was also written into one post in War Fifteen, in which he was given his own honorary faction of fans, which was dubbed "the Teddies".