From Fanlore
(Redirected from Dracula: The Series)
Jump to: navigation, search

Dracula: the Series, which aired for one season, was a light-hearted half-hour series about a pair of American brothers, Chris and Max, who moved to "Europe" to stay with their eccentric Uncle Gustav and his ward, Sophie. There, the supernatural-crazy Max was thrilled to discover that Gustav was the heir to the Helsing family of vampire hunters. The boys became enlisted in Gustav's fight to bring down Dracula himself, now living as a sophisticated, powerful, and hyperstylish businessman. Complicating matters were the need to keep the vampire-hunting a secret from the boys' mother, a romance between Chris and Sophie, and the mysterious connection between Gustav and Lucard's unstable henchman, Klaus (Geraint Wyn Davies, shortly before his better-known turn as a vampire on Forever Knight). While the show tended towards the campy (Lucard was fond of dramatic gestures and witty repartee), it occasionally relieved the comedy with a more sentimental or even dark turn.

D:tS is available on DVD in (at least) Region 1. 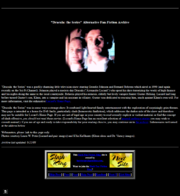 D:tS fandom is small, but one of the earliest to have a true web presence, with Lucard's Home Page (hosting fanfic, meta, and multimedia) created in March 1995 [1]. There are only a handful of stories online, split amongst gen, heterosexual romances with Lucard as the romantic lead, and slash. The slash is largely Lucard/Klaus, as the two canonically lived and worked together and Klaus's tempestous relationship with Lucard, which ranged from devotion to attempted murder, provided one of the season's major storylines.