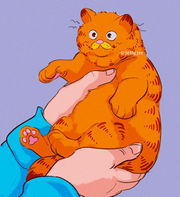 Fiend of Italian Cuisine by jellyjer (2020)

Garfield is a long-running American comic strip about a cat named Garfield, his owner Jon Arbuckle, dog Odie and their mundane lives. The strip was compiled in several books and spawned animated TV specials, TV series (Garfield and Friends), movies and a stage musical.

As of February, 2019, Garfield has 401 works of fanfiction on Fanfiction.net, making it the 29th most popular fandom in the site's Comics category.[1] The fandom is less popular on AO3, but has 61 fanworks as of February 2019.[2]

Garfield is a particularly popular subject of crossover fanworks. As of February 2019, on Fanfiction.net, 151 fanfics have crossovers with Garfield,[3] while on AO3, 42 of the 61 fanworks in Garfield - All Media Types are crossovers.[4]

The character "Garfield the Deals Warlock" in The Adventure Zone: Balance podcast is popularly depicted by fans as an anthropomorphic version of the cat Garfield; one fic plays on this further by proposing that the TAZ character known as John was originally Jon Arbuckle.

ShakespeareHemmingway is known for his over-the-top fics starring Garfield.

Perhaps one of the most well-known Garfield fanworks is a webcomic named Garfield Minus Garfield, created by Dan Walsh in 2008. As the name suggests, the webcomic is "created" by removing Garfield and other supporting characters such as Odie the dog from Garfield strips, until only Jon Arbuckle remains. In the worlds of the Garfield Minus Garfield website, "It is a journey deep into the mind of an isolated young everyman as he fights a losing battle against loneliness and depression in a quiet American suburb."[5]