Open Letter on the Future of Star Trek

Open Letter on the Future of Star Trek is a 1977 open letter by David Lubkin. 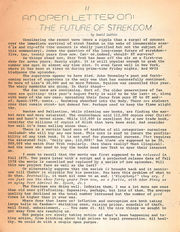 It was printed in The Cage, a print zine published on the occasion of SeKWester*Con.

Considering the recent wave (more a ripple than a surge) of concern over the immediate survival of strek fandom in the wake of innumerable scans and rip-offs (the concern is wholly justified but not the subject of this commentary), comes the question of the long-range future of strekdom — five, ten, twenty years from now. Can or, indeed, should — ST survive?

As things stand now, Star Trek has been off the air as a first-run show for seven years. Nearly eight. It is still popular enough to grab the number one spot in almost any time slot. It even fares well in New York, where it has been at times on during prime-time Friday nights — And WPIX bludgeons the episodes.

The supercons appear to have died, John Townsley's past and forth coming series of supercons is the only one that has successfully continued. No more of Lisa's 20,000 and no more Febcon, Equicon was cancelled this year. The wooly mammoths are going. In their stead —

The fan cons are continuing. Sort of. The older generations of fan cons are quitting — this year's August Party is said to be the last — or, along with many of the new ones, spreading their focus from pure ST to ST and — sf, Space: 1999, Comix.... Becoming absorbed into the Body. There are stalwart cons that remain strek — but damned few. Perhaps enuf to keep the flame alight tho.

Bantam and Ballantine, while planning new books, are finding the market more and more saturated. The concordance sold 112,000 copies over Christmas and hasn't moved since. While 112,000 is excellent for a new trade book, consider the millions of copies of Blish that have been sold. And consider how well it's been selling since then.

There is a certain hard core of trekfen of all categories — ourselves included — who will buy any new book. This core is enuf to ensure the profitability of any trek book. It is not enuf for phenomenal success. That requires the saturated folk. 'Golly gee, 112,000!' But there are supposed to be 20,000,000 who watch Star Trek regularly. (Are there really? Most illogical). And the ones who used to buy the books need new Trek to spur their interest on.

I seem to recall that the movie was first supposed to be released in Fall 1975. Two years later with a script and a projected release date of Fall 1978, the movie is cancelled and replaced by a series of new episodes. Will this new project fare as well as the last?

Or alternately suppose that the series is brought back and it continues till Chekov is eligible for his pension. You have this problem of what to do then. Eventually, it must all come to an end. ('Blasphemy!' they cry. I can just seen the show forty years from now, as a feel, with Adam Nimoy as an aging Port Admiral Mr. Spock, Jr..)

The fanzines are doing well. Indexing them [for Trekindex], I see a lot more new ones than old ones g(f)afiating, Expensive, perhaps, but lots of them. The average quality has declined as the total number increased but the number of good zines is higher than it ever was.

Where does that leave us? Inflation and corruption are both taking large tolls on fandom — shrinking cons, raising prices, scandals of theft, mail fraud, embezzlement, ... You name it. All the nice things we sought to get away from are reaching us.

But people are slowly taking notice of what's been happening and taking action, from bitching about high prices to legal prosecution. All heal thy. We could do with a couple open purges.

Fanac is muddling along, keeping things moving. We're still one big perhaps-not-so-happy family of those who will remain active even if reruns are relegated to the category of Leave It to Beaver or I Love Lucy. Stop for a minute, and consider the case of Lucy. Episodes that were filmed twenty years ago are still being syndicated; And who compares its quality to that of ST? Star Trek will reasonably remain on the air as reruns for another ten or fifteen years without injection of new episodes (or a movie). Hell, Lost in Space is still syndicated.

When was the last time you watched ST? If you're like most zine contributors, you watch maybe once a month. At best. We've all seen them too many times. As the airing of syndicated strek relates to fandom, all we need it for is as a source of new blood, new enthusiasm. There are ehuf fen with tapes, slides, clips and video cassettes of the episodes for anyone doing artistic or story research to find source material should the show ever be taken off the air. And certainly fifteen years from now, when anyone who wants to can have cassettes of all the shows at price he (or more likely she); can afford. Especially, in light of Paramount losing its suit against Sony and the rapid advances in communication technology.

As of now there are at least two groups involved in creating some sort of archive to preserve fanzines from the first generation on, Roberta Rogow

and I have completed the first four volumes of Trexindex and are at work on the fifth (the Star Trek version of the Reader's Guide to Periodical Literature) . What has bean thus far is being preserved in one way or another. (When it ia conclusively legal, why don't we take up a collection to start an ST Video Cassette Lending Library?) There, again, comes the question of the future.

Fandom is entering its adolescence, with natural enuf identity problems. Financial problems. Acne and pimples to mar our former cleanliness. SF fandom doesn't like us and I-Chaya bites.

Whenever we have a minor rupture — something on the order of Kraith or Alternative — someone, chimes in when the discussion becomes more heated than enlightening with the cry of lDlC.

Quite so. The one ring that binds us has a triangle sticking in its side. That which draws us together is that which differentiates us from, say, sword and sorcery fringe fan groups or trekkies in flight. Underlying all our discussions on the mating calls of Gorns in heat or the aerodynamics of kligats is a mutual agreement to attempt to live by IDIC. Some of us (me!) don't believe in the Peace of Surak or the Dominance of Logic, but everybody TRIES to rejoice in diversity. Which sets us apart, from most of the rest of humanity.

And then comes the question of fan fiction. We seem to be expanding our areas of consideration. How bountiful a field is Star Trek? Obyiousiy there are infinite stories detailing additional worlds or alternate histories or futures. But that sounds rather like some corruption of science fiction to me. How much fiction can be written on purely Star Trek topics? In other words, how many stories are worth writing about the Triad, Sarek/Amanda, pon farr? Is the universe of Star Trek open or closed?

While we carry out our long-needed house cleaning and realization that fandom is not Disneyland and perhaps never was, maybe it's time to take pen in hand and a couple of minutes of thought and consider just where fandom is going and where it should go. Nothing like self-awareness.

Note that this is not the sort of thing decided by majority vote. Everyone makes his own (Yes, her own (By my calculation 78% of fandom is female)) mind up concerning the Way of the Future, all the superimposed ways adding up to the future. And, also obviously, things-may-not-work-out-the-way- we-want.

This issue must be discussed. There will not be consensus concerning evaluation of the trends, nor will anyone agree as to appropriate action. Who cares? So long as it is talked over.