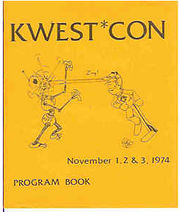 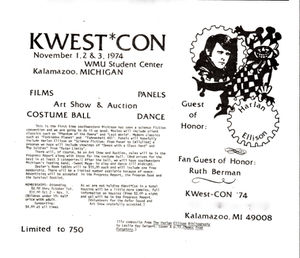 flyer from A Piece of the Action #17, click to read 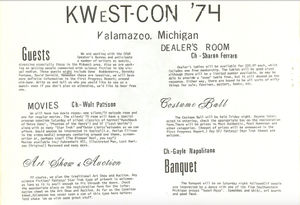 top of a flyer from Menagerie #4, click to read

bottom of a flyer from Menagerie #4, click to read

Kwest*Con was a convention that took place in on November 1, 2, and 3 in 1974 at the University Student Center at Western Michigan University, in Kalamazoo, MI.

From an ad in Star-Borne #14: "A lot of great things planned for this college/S.T.A.R./Kwe con, held a the University Student Center, Western Michigan Univ. It's going to be a small but very nice con."

Membership was limited to 750 people, but it is unknown how many attendees there ended up being.

Harlan Ellison was the celebrity Guest of Honor and Ann Holly Hunter was the fan guest of honor. Hunter was the author of The Man from U.N.C.L.E. Ace #10, The Assassination Affair.

The program book contains work by Phil Foglio and Ruth Berman, and a short essay by Harlan Ellison, "Dreamsellers" and is 16 pages long.

This con is the forerunner and inspiration behind MediaWest*Con. [1]

Not Strictly a Trek Con

In 1981, Lori Chapek-Carleton wrote of this con: "The Kalamazoo con (starting with KWest*Con way back in 1974!) did not start out as strictly ST cons, and in fact, never were, though Trek gained in emphasis over the years. T'Con was mostly Trek, but 2'Con was a blend, and Mor' Eastlerly was even more so." [2]

In Boldly Writing, Joan Verba described the convention: "KWest*Con was diverse: it did not devote itself exclusively to either science fiction or Star Trek, and the much-rumored hostility between sf and ST fans was totally lacking." KWest*Con was the forerunner of a series of Star Trek conventions in the 1970s that would provide a yearly rendezvous for Star Trek editors, artists, writers, and readers. The tradition continued into the 1980s, in part, by the Media*West Cons."

From an Early Flyer

We are working with the SFWA Speaker's Bureau and anticipate a number of writers as guests, stressing especially those in the Midwest area. Also we are working on getting people connected with science fiction in the visual medium. These guests might include Gene Roddenberry, Dorothy Fontana, David Gerrold. Remember these are tentative, we will have more definite information in the first Progress Report; around mid-June. Write us and tell us who you would like to see as a guest - even if you don't plan on attending, we'd like to hear from you.

Movies (chair, Walt Pattison): We will have two movie rooms - one silent/TV episode room and one for regular movies. The silent/TV room will have a special program sometime Saturday of silent classics of horror ("Hunchback of Notre Dame", "Phantom of the Opera") and SF ("Lost Worlds") along with as many "Star Trek" and"Outer Limits" episodes as we can afford. Would anyone be interested in topical (i.e. Harlan Ellison in the video media) programs centering around one theme, screen writer or, perhaps star? (The Blooper Reel, you say?) Movies available incl Fahrenheit 451, Illustrated Man, Lost Horizon (Original) Marooned and many more.

Art Show & Auction: Of course, we plan the traditional Art Show and Auction. Any science fiction/ fantasy/ Star Trek type of artwork is welcome- as long as it is small enough to fit through the doors. Check the appropriate place on the registration form for the information sheet on the Art Show and Auction. As far as the Committee Kalamazoo has never seen a con of this type here before - lets shake 'em up with some great stuff.

Dealer's Room (Chair, Sharon Ferraro): Dealer's tables will be available for $20 on each, which includes one free membership. The tables will be good sized although there will be a limited number available. We may be able to provide a "swap" table free but it will depend on the response. Either way, there are bound to be all sorts of nifty things for sale; fanzines, posters, books, etc.

Costume Ball: The Costume Ball will be held Friday night. Anyone inter ested in entering, check the appropriate box on the registration form.There will be prizes in Most Authentic, Most Humorous and other catagories. (Amount of prizes will be announced in the first Progress Report.) Any SF/ fantasy/ Star Trek themes are welcome.

The Banquet will be on Saturday night followed (if people are interested by a dance with one of the fine Southwestern Michigan groups "Sweet Maya". Speeches and skits, art awards and good food.

From A Conversation with Paula Smith:

Around early 1973, I'd met Sharon Ferraro. I was at Kalamazoo College and she was at Western Michigan University. We got together and formed a science fiction society between the two colleges and called it KWest*—"kwestar." Sharon and I organized a con in 1974 in Kalamazoo called KWest*Con and we got Harlan Ellison as our pro GOH [professional guest of honor] speaker. We had to pay for his flight and room and board, but we didn't have to pay an honorarium. And we got Joan Hunter Holly as the fan GOH. Joan, of course, was the author of The Man from U.N.C.L.E. Ace #10, The Assassination Affair. Although this was an SF con, a lot of those who came liked U.N.C.L.E. and Star Trek too. Joan came from Lansing and she knew Terry Carr, who was an editor for Ace. She was older than most of us — all of 40.

A couple of hundred people attended the con. We made our nut. We brought Harlan to Sharon's house and fed him a chicken dinner. Sharon was a big Ellison fan. She had said, "We can get him," and we did! And we had a great time.

Sure is tough to write about your own con. Especially since there was so much we missed. Friday afternoon got started a little late with the Man from UNCLE panel. Buck Coulson, Paula Smith, Joan Hunter Holly, Carol Lynn and Ruth Berman discussed the show and the growing fan movement behind it. After that was over, the rest of the afternoon was unscheduled except for movies and an informal discussion on Klingons. And of course, the dealer's room and art show were on. 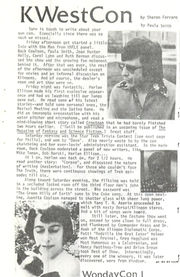 Friday night was fantastic. Harlan Ellison made his first explosive appearance and had us laughing till our lungs gave out. He read some of his latest stories—and told some personal ones, the Revival Meeting and the Dating Game. He did an impromptu presentation with his water pitcher and microphone, and read a mind-blowing short story called Croatoan that he had barely finished two hours earlier. ('Twill be published in an upcoming issue of The Magazine of Fantasy and Science Fiction.) Great stuff.

Saturday morning was the Star Trek Trivia Contest (see next page for Phillo), and won by "Dave". Also nearly waste to by the con chairbeing and her ever-lovin' administration assistant. In the main room, Buck Coulson moderated a panel of new writers, like Mike Toman, Bob Borski, Harlan Ellison. At 1 pm, Harlan was back on, for 2 1/2 hours. He read another story: "Corpse", and discussed the nature of writing (masterbation). For those who couldn't face The Truth, there were continuous showings of Trek episodes till six.

Along toward Saturday evening, the filksing was held in a secluded locked room off the third floor men's john in the building across the street, the password was "The Green Hills of Earth" sung to the Coke song. At this open meeting, Juanita Coulson managed to shatter glass with sheer lung power, which Yang T. N. Asprin proceeded to melt with nasty Dorsai/Klingon stares. And a bit of songs were heard.

Still later, the Costume Show went on, emceed by some clown in full dress, and flunkeyed by Commander Krass and Dr. Kwak of the Klingon Diplomatic Corps. Patti "Godzilla the Brat Eater" Helmer won Most Original, Greg Hagglund was Most Humorous as a Calabranian, and Nancy Hastinqs-Trew and Brian Broun took Best of Show. Interestingly, every one of the winners, it was later discovered, were from Windsor.

Backing the Costume an on into the night, was the Sisters, a fine band, who had a remarkable rendition of the ST theme worked out. A certain Ms. M. Basta spoke unto this one that their version was better than the original. And she was right.

Sunday was panels, primarily; the best was yet to come. "Created Worlds" with Juanita Coulson and Ruth Berman; "Amateur vs. Unknown" with Ruth and Harlan.

All in all, it was a friendly con, quite informal, We enjoyed it, at least till the bills came due. Thanks, guys, for coming and making it happen. [3]