From Fanlore
(Redirected from 2'Con)
Jump to: navigation, search

You may be looking for T'Kon, the British Star Trek con.

T'Con was held in 1978. It was commandeered by Paula Smith, Gordon Carleton and Lori Chapek-Carleton.

Boldly Writing says the most talked about zine at this con was Future Wings.

Paula Smith talks about this con here, in a 2010 interview with Transformative Works and Cultures.

T'Con, along with SeKWesterCon, was one in a series of cons that eventually became MediaWest*Con in 1981.

"What If We Gave a Fannish Convention, and Everybody Came?"

illo printed in IDIC #6, the art is not credited by signed "LR"

An illo printed in IDIC #6 in December 1978 has the caption: "What If We Gave a Fannish Convention, and Everybody Came?"

It illustrates several things: the intimate fannish nature of this con, the lens through which media fandom was regarded by a small group of influential fans, and the clique that fandom can be.

Portrayed in the illo: 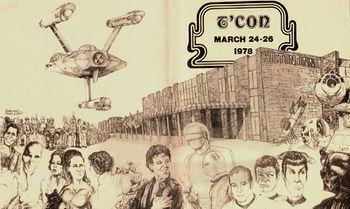 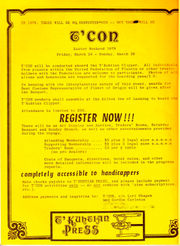 The first con was March 24-26 1978. It was held at the Hilton Inn in Lansing, MI. Attendance was limited to 250. There was an art show, dealer's room, a costume show, a Saturday night banquet and a Sunday brunch. It was "completely accessible to handicappers" as per a flyer.

There were two con skits. One was a musical parody called "Tiptoe Through the Fanzines" performed by Jean L. Stevenson, Juanita Salicrup, and Leslye Lilker (Saturday night) and "Pigs in Space" was performed at Sunday breakfast.

T'Con 1978: Welcome from the Program Book

This is your Captain speaking ...

I hope you'll enjoy your stay. You'll be cruising for approximately two solar days aboard T'Kuht's finest starship — in fact, T'Kuht's only starship. The T'Kuhtian Clipper was built by Starfleet and given to T'Kuht as a gift in gratitude when the Federation was granted the rights to build a base on that planet when Vulcan, our sister planet, refused.

Our course is set from Sol III round trip to T'Kuht. We hope the entertainments and recreational facilities on board will be sufficiently stimulating. The CIipper was designed to be accessible to all Federation members who are native to Class M planets, so I hope all of you, humanoids and non-humanoids alike, will be comfortable.

We will not be responsible for anyone leaving the ship, via shuttle or airlock, until the trip is completed. Any such venturing into space along the way is at your own risk.

In a moment, your stewardess will explain energency space suits and point out the location of the escape pods. Have a good trip.

To our dismay, the hotel had not booked the UFP-SFC, inc. rooms together; in stead they split us up on three sides of the swimming pool. All together, we had nineteen people and seven rooms — this is much better than nineteen rooms and seven people.

Not much happened that night, con-wise. Jan and I found that we shared the connecting door with Dave Manship and Cindy Myers. The four of us went swimming, and afterwards Cohmen joined us for a little sabre fighting. Totally exhausted, we all got to sleep toward the wee hours.

Saturday morning, after a $! breakfast in the Coffee Shop, we stood around in the dealers' room as a Rebel Soldier and a Sandperson. Jan and Paula Block as Luke Skywalker posed for some funny "Luke's Revenge" pictures. There was also a girl there as a Sandperson with her Sandbaby! She and Janet posed for a "Tattooine Gothic" picture.

Our table, highly noticeable because of the beautiful yellow and black sign executed by Dawn Uebel, sold FLEET, Paulie Gilmore's buttons, and paperback books. We also took orders for our rare and valuable issues of Starbase Ten and Starbase One.

We caught a panel on the structure of the Star Wars Universe. I was a little miffed at the obnoxious Klingon in the audience who tried to run the panel, but I guess it takes all kinds.

The art room had the usual stuff - some fantastic things mixed with the mediocre. I was impressed by some very good pencil works by Alice Jones, and some excellent watercolors by another artist. I was turned off by the two tables of Leslie Fish's work. Quantity does not equal quality, I'm afraid.

The Saturday Night Buffet/Banquet was amazingly good! The food was downright delicious and the help particularly patient.

What impressed me the most this year were the costumes. At the last two area conventions, Sekwester*Con and Sekwester*Con, Too, the costumes were, well, cute. They were pretty and flashy, but it just seemed that no one put a vast amount of effort into their apparel, with the great exception of a few. This year, it seemed as if everyone tried to go out of their way to make a costume that not only looked great, but was logical and functional. Considering the apathy that I've seen in this club with costumes, the Banquet was a sight for sore eyes. The best costumes that I saw at the con were; the Stormtrooper made of foam and paper-mache; the paper-mache Darth Vader. Janet Wells' Sandperson; the Andorian; Mary Kay Willey's Wookiee the Rebel Pilot; Jackie Paciello's Greedo; and Randy Kaempen's Luke Skywalker. I'm sure there were many, many more wonderful costumes, but these few really struck me the most.

While the art auction transpired, a number of the fencers went to the natatorium. Let's hear it for the Starfleet Fencing Corps! Thank you, Jan, Marc, Cohmen, Bill, & Pat for several good fights.

That night we partied in the Federation Con Suite. We stayed up all night and bitched and listened to Cohmen's tape deck. We recruited a few new members, it seems!

Sunday Breakfast/Brunch was nummy, if sparse. Mike and Sharon Ferraro-Short and Paula Smith put on a "Pigs in Space" skit.

I only have two regrets after T*Con. I didn't meet Denise Boghosian whom I've been trying to find for the past four years now, and no-one mentioned my being in the Starfleet Medical Reference. Oh, well! I guess no one collects autographs anymore! [2] 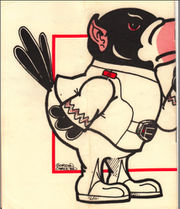 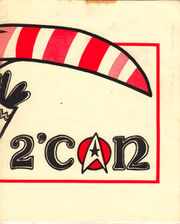 program book cover, showing back and front covers together

a plea from a fan, printed in the program book 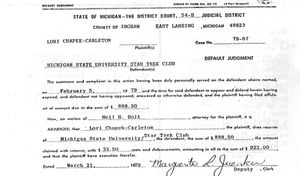 a copy of a legal judgement, printed in the program book
There was a notice in the con program by Amy Falkowitz that most likely had to do with the subject of erotica and slash in fannish works, a subject that was often very divisive:

I've been in fandom a while... and in general, I've had a great time, and gotten to know a lot of wonderful people. And I've seen a concept come alive. The IDIC. It's a beautiful symbol, folks. And its meanings are even more so. And most of us are good examples of those meanings. But there is something unkind and cruel among us. It's the 'love letters.' The nasty, malicious, threatening, and now, anonymous letters that are being sent to people. Hey, folks, IDIC is all of us. Fandom is all of us. And not one of us has the right to treat anyone else in such a manner... When one of us stoops to such childish meanness, it reflects on all of us... But if this sort of thing goes on, how can we really live and believe in them?"

Also in the program book is a photocopy of a court order, a default judgement with the plaintiff (Lori Chapek-Carleton) being awarded $922 by the defendant, the Michigan State University Star Trek Club regarding rights to some early issues of zines, likely Warped Space.

T'Con 1979: Welcome from the Program Book

This is being written by the 2'Con chairman closest to Lansing, since Paula is too far away to get this done in time to get to the printer's and back in time for the con.

Basically, I hope everyone reads their program book and checks the blackboard and/or any other signs we put up to notify people of last minute schedule changes. We take no responsibility for sudden changes; we expect some to unavoidably occur. We'll try to let you know beforehand. If not, take comfort 1n the fact that we'll probably be just as surprised as you arel If you have any questions, Just ask. Our film program will be posted and constantly updated. Fast-food joints are down Saginaw St. (which the hotel fronts) — you can take your cars and/or the city bus system, which loops thru the Hilton's driveway. If you drove here, fill up your gas tank as soon as possible. While a gas shortage Isn't expected, you never know ...

There will be a Chicago In 1982 Worldcon Bid Party sometime over the weekend; location to be announced.

If you can make it, come to the Dead Dog panel Monday afternoon, and tell us what you liked and didn't like about the convention. You an submit your comments in writing, if you like. Rumor has it that Joyce Yasner and Devra Langsam will move the Mlchicon from Kalamazoo/East Lansing to New York State next year; we suspect we'll have it back here in two year's time, then.

Membership just topped 300 attending as I write this (May 24th), and Leah Rosenthal pointed out that at the time she counted, people from 33 different states and two other countries had signed up to attend. We got over 150 people signed up for both the breakfast and lunch, and over 180 signed up for the dinner banquet. Over 100 people voted for the Fan Q Awards, and we're happy people got into the spirit of things.

We salute those of you who made it despite the United Strike and gas shortage, and commiserate with those who couldn't ... Co-Chairbeings: Lori Chapek-Carleton & Paula Smith.