The first two issues were titled "Starbase Ten." The third issue underwent a title change and became "Star Base One." (Star Base 1 on cover)

When Starfleet command was first created. it was only natural that the club's zine have a name of a Starfleet Related Object. The first thing that came to mind, and stuck, was STARBASE TEN. After looking into the name, and what Starfleet really is, SB TEN became inappropriate. You'll understand when we present a detialed explanation of STARBASE ONE in the next issue. You'll be facinated [sic].

Starbase Ten 1 was published in January 1975 and contains 10 pages.

It has a few small illustrations, a article called "Nature's Speed Limit -- The Speed of Light," club meeting dates, some info about cons, some poems, news, some very short fiction, a joke about Henry Kissinger, and some letters (both real and fake). The vast majority of the zine, however, is made up of intricate club bylaws and rules. Contributors to this issue were Kristen Halversen, Dean Calin, Coleen Cunningham, Maria Kumpf, June Matayoshi, Scott Sodaro, Steve Herr, and David K. Vanderberg. 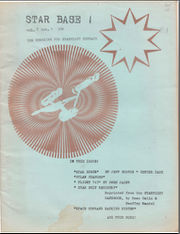 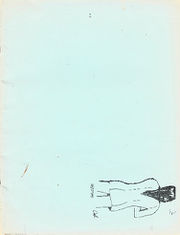 Star Base One 3 was published in May or June 1975. This is the first issue with the new title.