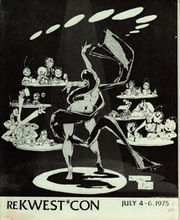 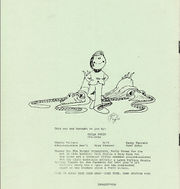 back cover of the program book 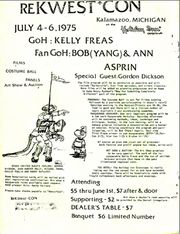 ReKWest*Con was put on by Sharon Ferraro and Paula Smith. It was a combined Star Trek and general Science Fiction con that preceded SeKWester*Con.

Lori Chapek and Gordon Carleton sold copies of Warped Space there, something that increased that zine's readership dramatically.

The con included the premiere showing of "The Capture" a humorous slide show written by Bob "Yang" Asprin and drawn by Phil Foglio, shown and narrated at various conventions in the 1970s. It was inspired by a (very real) SF charter cruise that Kelly Freas and Gordon Dickson were on in the Bermuda Triangle, involving many of the leading SF authors, artists, editors, and fans of the day. The Capture Coloring Book was published a year later.

This con's successor was at one time to be called "InKWest*Con," but this was changed to "SeKWester*Con."

Paula Smith talks about this con in a 2010 interview with Transformative Works and Cultures. See A Conversation with Paula Smith.

Well thought out, quiet, informal, small (158 registered members), enjoyable; all these describe ReKwest*con. The program book, featuring artwork by Kelly Freas, Phil Foglio, and Doug Rice, and an article by Bob (Yang) Asperin on the how and why of success in costume competition, was very well done. The convention itself opened at noon Friday and ran quite smoothly through Sunday evening, (The Hole in the Deck Gang and the Dorsai saw to that.) The only difficulty was that the Star Trek films were not shipped in time for the convention, but even this disaster was not sufficient to destroy the pleasant time had by all. The art show was the finest I've seen: it featured many works by Kelly Freas, Elizabeth Pearse, Joni Wagner, De Peterson, Phil Foglio, and other fan artists. Indeed, the time one spent in there was measured in hours. The dealer's room had an assortment of fanzines and souvenir items, mostly Star Trek. Activities included films, panels and a masquerade, which was the highlight of Friday's doings. Kelly Freas, Yang and Anne Asprin, and Patti Helmer were the judges. One had to look twice to find Kelly, though. He materialized m the form of a Klingon, and quite effectively stole the show. Saturday evening brought the banquet, followed by The Capture, a superbly presented slide show featuring artwork in slides by Phil Foglio, and narration by the Mongol Art Players.' (How to conquer the Universe with a tube of cobalt blue and one Gremlin.) The art auction, in keeping with the pace established by the art show, went on for hours, astounding artists and bidders alike. Kelly Freas was Guest of Honor, and Gordon Dickson was Toastmaster and special guest. Fan guests of honor were Bob and Anne Asperin. Friday and Saturday evenings, devoid of scheduled activities, were filled with filksinging and parties, swimming, and Trektalk, and everyone enjoyed themselves. Remembering last year's program book, I searched diligently for this year's cryptic clue to coming attractions. I found it on the back cover in fine print: "Tune in again next year gang--sometime, some station for...InKwestCon. Wonder what they're up to now... [1]

22 days past ReKwest*Con (held July 4-6) and what can I say about the con? Not much except to say that I enjoyed myself immensely, despite a persistent migraine. Which I think, was precipitated by the breakdown of the Filthy Beast So I'll begin at the beginning (a logical place to begin), even though it precedes the beginning of the con ...

Paula B., Gordon, and I, I driving, were on our merry way to the metropolis of Chicago (Paula's old stomping grounds) to catch Leonard Nimoy in a play before swinging back to Kalamazoo for the con. Our van was recent purchase, bought the day before, in fact, and had been decorated as the shuttle-craft of Landing Party 6. Just at "the Kalamazoo exit of the highway, our trusty shuttlebus' engine blew out (scattering dilithium crystals all over the road). End of scene one. (None of us being technically minded, we didn't know what had happened until just before we were towed into a Sunoco station. Slightly daunted, we placed a call to Sharon Ferraro, friendly neighborhood rescuer, who shortly picked us up. Much more happened, but that's neither here nor now in writing a con review. Suffice it say that we never made it to Chicago., but we did arrive in Kalamazoo in time for the con!

On with the review ... ReKwest*Con was a nice, small, relaxed, friendly con. I had nothing to do but sell WARPED SPACES and related items, and appear on one panel, titled of all things, "How to Run a Con." (Groan) The Art Show exhibited items that were of outstandingly fine quality (How could thev be anything else, what with Kelly Freas' scattered here and there and everywhere?). Plus other such outstandingly fine artists as Doug Rice, Phil Foglio, and Gordon Carleton! And Joni Wagner and Elizabeth Cross. And Todd Bake. Todd Bake?

Plus the con was especially enjoyable on a very personal level. I was reunited with several friends who came from far away - Mary Manchester, Candace Hale, Dorsai Dave "Dink" Manship. Plus other nearbyer friends. Working a dealers' table is like that, though. Everyone stops to visit, and sometimes people even buy a copy of your zine!

My migraine dictated that I not attend any of the parties, etc., etc., etc. So I sort of dosed in the avertings and prowled around Sharon's apartment, reading all her Harlan Ellison books, And feeding the cats.

So what if the Trek episodes did not arrive in time, for the con? [2] Sharon and Paula Smith (and Paula 3 and Gordon) know why I didn't mind missing the episodes then... We even got a private showing of "Nosferatu" courtesy of Trey Musick. Musical accompiatn of Paula Block and her kazoo. High point of the con proper, in my humble opinion, was the make-up demonstration by Yang on Kelley, who makes a very satisfactory sinister Klingon (Long Live the Empire!). That, and the Art Auction. [3]