Kelly Freas was a professional science fiction artist who was also a Star Trek fan. He drew several Star Trek pieces, including a set of portraits for Officers of the Bridge, a booklet produced for a 1976 New York convention.

Sharon Ferraro wrote a profile of Kelly Freas for Menagerie #6 (1975), called "A Gremlin in Trekland." 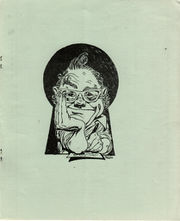 a self-portrait printed in 1975 for the ReKWest*Con program book, a con at which Freas was the Guest of Honor