A Fragment Out of Time 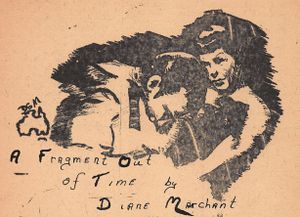 A Fragment Out of Time is the first piece of published slash fan fiction in Star Trek fandom. It is a 2-page story that was printed in the September 1974 issue of Grup #3.

inside art from Grup #3, Diane Marchant. "Impossible?.... No Jim. I warned you about messing with aliens,.... especially Vulcans." This drawing appeared at the bottom of the story, offering readers another clue as to the identities of the two characters.

The story was reprinted by Datazine Publications in 1984 in Best of Grup #1.

A columnist in Not Tonight, Spock! #2 (1984) calls this story "To Invite the Night." It is unclear if this is simply an error or if this was the original title of "A Fragment Out of Time" when it was in its underground form.

“Shut up…we’re by no means setting a precedent.” He was quiet…and not merely because he was used to obeying that voice implicitly. He was being peeled, slowly, like a delicate fruit, in time to some far off pagan rhythm and he found his logical mind was swathed in a white mist of sensual well-being. Gentle hands spread warm oil slowly, in ever-widening circles over his chest. Tantalizingly, teasing fingers ran over each nipple, flicking the tip lightly. A slow, deliberate tongue reached out to each erect button. He shivered, then squirmed; surprising himself. A sleek, well-oiled torso slid over his chest down to his navel. Tiny shivers accompanied the soft nips at his abdomen. Warm oil was dribbled over lower areas; then a [ravaging?] finger made him glisten. Even his thighs were being massaged…the pressure was…delicious. Well-skilled hands made long, swooping strokes from his knee up the inside of his leg to the upper thighs. Now, he could not prevent this, any more than he could stop a solar eclipse…even if he’s really desired to. It had been building all these years…no one set of circumstances was the cause…now, it seemed it had been inevitable from the outset.

About "A Fragment Out of Time"

Grup was the only adult fanzine being printed at the time (and tame by today's standards). Diane's story really was only a story fragment (a couple of pages of "he" and "him"—no names mentioned, but an illustration by Diane of Kirk and Spock was included). Because it was published in an adult zine, for a more specialized audience and likely with a small print run, fandom as a whole did not register this piece as "the first published K/S.

The story also refers to someone with a "logical mind" and his partner has a "blond head". But it was written so obliquely that it wasn't clear to many readers that the two people having sex were both men, much less Kirk and Spock, until Diane's letter to the editor in the next issue, Grup #4. However, in the fanzine Legacy commentators have pointed out that:

....the first ever piece of K/S art was published alongside the first ever K/S story (“A Fragment Out of Time” ....[it included a picture] drawn by Diane Marchant, the author of the story ... given the picture there can have been no doubt they were Kirk and Spock. [1]

Diane's submission in the following issue of Grup also raised the possibility of a close, sexual relationship between Kirk and Spock. It was an essay titled, "Pandora's Box... Again," and subtitled, "A Psychological Discussion of the Relationship Between Captain James T. Kirk and Commander Spock." As the author of Boldly Writing explains:

In this article, Diane said, "Spock can happily love Kirk all he wants and not feel that it is un-Vulcan...in this stage of his emotional development, Spock is not and could not be any woman's man." At the time I thought Diane simply meant that Spock was not ready for marriage, and that he loved Kirk in a platonic sense. The article is so subtle—as were most hints of K/S at the time—that readers could interpret it in that manner. This is not the intended interpretation, however. Diane was making an argument for a sexual relationship between Kirk and Spock, which other fans....picked up and began to discuss openly. [2]

The Splash it Made

A year later fans were still debating the premise behind the story. In the letterzine The Halkan Council issue #12, Connie Faddis reviewed the story:

Diane Marchant wrote an article on the Kirk/Spock homosexual love affair premise that’s been buzzing around fannish conversations for at least a year. The idea is an interesting permutation, but Diane’s argument fails to convince because she failed to document her evidence thoroughly, and there’s a tone of ‘dirty old broad getting her rocks off, heh heh’ that distracts from the argument and debases the premise. [3]

By the time the last issue was published in 1978, Boldly Writing claims that "Grup seemed almost tame compared to what was coming out elsewhere."[4]

Diane attempted to distance herself from the story years later. On The Foresmutters Project page, they explain:

The author has explicitly refused permission for this work to be in the Foresmutters Project, stating that: "Anything I penned (all those years ago) was only meant to remain in letters between friends. . . But somehow it ended up in print, & so started a huge snowball that became K/S. That was upsetting enough & I had hoped that it was all 'dead & buried' by now."[5]

While it is possible that original story ended up in print due to miscommunication, the subsequent essay was purposeful. Given the relatively small circulation of Grup, the reception, the increased visibility of her work and the ever expanding discussion in other letterzines such as The Halkan Council and Interstat may have been unexpected. From an interview done a few months before she died, Diane explained:

It couldn't be done, said the others. I don't know.... But one could give it the ol' college try. Thinking the outcome would be staying between the three of us [the editors of Grup and herself], I decided to accept the challenge. Thus, “A Fragment Out Of Time.” Which lo and behold the girls thought was for publication....

Once the tooth-paste is out of the tube just try returning it. The girls had printed the little vignette before asking if I wished to use a nom-de-plume.

Amongst which were two I'll never forget. Two ladies (Gerry Downes & Leslie Fish) actually “asking” my permission to use the hypothesis. Gosh, I was tickled. Even if, as far as I could see, it wasn't mine to give. The subject was a universal constant (not mine). It was there in the aired episodes. I just gave it a public voice of fandom.

Really, I had nothing to do with the initial concept, as it was there unfolding on our screens as we watched our beloved Star Trek. Me, well—I just accepted a challenge and attempted to subtly present the idea deftly (with slight humorous overtones) as a scenario which most could find acceptable at that time. [6]

A complete copy of A Fragment Out of Time was worth 25 points in the 2011 University of Chicago Scavenger Hunt.[8]

This story was translated into Russian in Логика сердца (2017).

Re: Paula Block's letter in Warped Space #13 and M. Bayard's in #14 -- I liked Hydeman's "To Need a Friend." The description of Spock's grief was too physical, possibly. Possibly a massive outbreak, like the end of Amok Time, as catharsis, would be better, but I think Spock would react very badly to Kirk's death. In the actual episodes, the only time Spock comes close to losing control (when not infected, etc.) is when Kirk is in danger. Spock wanted to kill the Horta! And he has no emotional outlets. Kirk being the only person Spock ever had a give-and-take relationship with. It all adds up to a severe emotional crisis— and with Kirk's insistence on doing dangerous things himself— one likely to occur. Block's and Bayard's DOB ((Dirty Old Broad, re: GRUP)) tone about the ending was rather unsophisticated. Spock and McCoy's being alone for several hours might be interpreted many ways, but varying interpretations are part of the fun of reading and writing fiction. And if they weren't just smelling the flowers, so what? Using Diane Marchant's words, in their emotional state, it wouldn't be setting a precedent. [9]

It was during this period (mid to late 70s), that the first K/S story was published. It was a ghastly two-page sex, blood, and death pwp, as they're called now. I can't even remember the name of the thing. At the time, it created a firestorm of controversy within Trek fandom, but it also opened the door for everyone who was to follow. Someone has to be first, and this was it.[10]

Crawling out from under the skirts of Star Trek fanzine Grup, the first slash story ‘A Fragment Out of Time’ appeared in 1974.....‘Fragment’ was more twee than twisted but more than enough to fire a photon torpedo across the bow of the trekkie community. Instantly controversial, Merchant defended her work in issue 4 of Grup before expanding on her defence debate through the letterzine The Halkan Council the following year. While fans had speculated there was something to the Kirk/Spock relationship that dare not speak its name, committing the idea to print caused a veritable riot of abuse and discussion impassioned enough to force a rift in fan culture. The story of the libidinous authority figure and the virtuous loner struggling to repress their sexual side had been the hallmark of so-called ‘Harlequin’ romance novels for years. The juxtaposition of a male seducer with a male interest in a science fiction context represented a dramatic break from ‘zines reverential treatment of the canon with their ‘same material only less good’ content. In one move Fragment had created a new brand of fanfic based not on filling in gaps as creating whole new worlds of discovery, boldly going where no fanboy had gone before. [11]

“A Fragment Out of Time” by Diane Marchant is so poetically vague that only her accompanying illustrations cement that the story is about Kirk and Spock. There’s a great discussion of how the story sparked a debate and then the genre on fanlore.com’s wiki, but for this post, I want to focus on how this piece’s bashfulness adds to its appeal for me.

Though undeniably brave in writing about two pop-culture figures engaged in a homoerotic romance at a time homosexuality was not seriously discussed in pop culture, the language of the story is almost demure in its descriptions. Especially when compared to the exhaustive explicitness (“This goes in there, then that sprays all over everything…”) of many modern slash stories, the omissions here seem literary. I feel they give the piece a tender tone, capturing that feeling of boundaries being gently crossed and what’s long been unspoken being fully understood for the first time.

It’s was a big boundary to cross, one that changed the world of fan fiction forever, so I find it inspiring for my own writing that she did it with such grace and humanity. What do you think? [12][13]

"A Fragment Out of Time" is remarkable for many reasons, two being its subject matter, and its visibility. But if Marchant believed that she started K/S with this vignette, then she was being unnecessarily hard on herself, arrogant, or ignorant. K/S was not the invention of any one fan. It was the invention of many fans by way of their telephone discussions, their private letters to each other, their conversations at cons, and in the drawerfic and the circuit stories they wrote. In fact, people are still "inventing" K/S every day; by people who are totally unaware of the existence of the fandom, and by those fans who take the relationship in different and new directions. [14]

4/5: This is a piece of fandom history, and to be fair, it's not that bad. It's non-descriptive to the point that you can't even tell that it's K/S, and it's not very clear what's going on.[15]