This title, apparently, was not it's original title, but the one used in the zine.

It was written in response to her own story A Fragment Out of Time. [1] 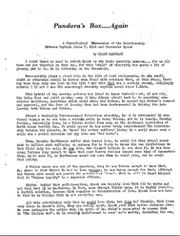 In this essay (which has the subtitle: "A Psychological Discussion of the Relationship Between Captain James T. Kirk and Conmander Spock") Marchant explains how, and why, Spock loves Kirk.

She proposes that Spock is essentially somewhat of an adolescent, has a case of hero-worship on James Kirk, and because of Spock's conflicted nature, feels he cannot love someone in an expected way.

Marchant discusses how many times Spock has endangered his own life to save Kirk's and analyzes a number of episodes.

Aboard a basically Terran-manned Federation starship, Spock is surrounded by emotional beings so he can take a certain pride in being Vulcan.Yet he is lonely. Showing feeling, especially love, is a Vulcan social faux pas; so the emotional approaches of Earth women terrify him.... He knows his mother suffered living in a world where even smile was a social solecism and any love was 'bad taste.' Thus, knowing Earthwomen suffer when denied love, he would (at this stage) never wish to inflict such suffering on anyone for he feels he knows his own limitations in that field all too well... A Vulcan woman was out of the question, too; he was Terran enough to know that.... He had to love someone, he was human enough for that; although his Vulcan side would not permit the terminology 'love.' What to call it then? Simple! Call it 'Vulcan loyalty' to a superior officer. Hidden, beyond that self-deception, Spock can happily love Kirk all he wants and not feel that it is un-Vulcan..."

Does Kirk know how Spock feels? Surely, he does; he accepts it without comment, not being the man to shirk his responsibility -- whether to ship, or a hybrid's peace of mind. He is also, of course, fond of Spock...

None of this, of course, that Spock is incapable of a purely physical relationship with a women; but at present he is not emotionally mature enough to become totally involved.... He is already committed, heart and soul, elsewhere and never could love ay woman -- for he is not used to doing things by halves. The majority of people may still remain unconvinced, refusing to see that at this stage of his emotional development, Spock is not and could not be, any woman's man. [2]

In the newseltter, STAG #3 (about September 1973), Jenny Elson writes a character study called "The Inter-Relationships of Enterprise Crew Members" in which she analyzes Kirk-Spock, Kirk-McCoy, McCoy-Kirk, Spock-Kirk -- The daring paragraph, one that generates much discussion in later issues reads:

To understand this relationship, one must understand Vulcan, and the attitude of the a half-breed. Spock's culture is based on stoicism, logic, peace, harmony and beauty of thought. With this perfect balance of mind and body, Vulcans can enter a good and lasting relationship... a lasting union, which is almost like a courtship. Spock sees through the ideas of a Vulcan, yet is capable of understanding Terrans, too. Kirk and he together have all the attributes of a union at its best. They are a partnership, and the Good exists between them. Kirk, Spock knows, is not aware of this. Only Spock, with his Vulcan heritage, can equate exactly what is between them, and it is something so deeply private that Spock will rarely admit to it, even to himself. So it is Spock who keeps the relationship seemingly distant, and suffers the intense loneliness this inevitable brings. On Vulcan, to a Vulcan, he could openly express what he feels, for another Vulcan would understand. But Kirk, a Terran, would not, and therefore Spock must keep to himself the knowledge deep with him; that he is actively and logically in love with James Kirk...

Diane Marchant wrote an article on the Kirk/Spock homosexual love affair premise that's been buzzing around fannish conversations for at least a year. The idea is an interesting permutation, but Diane's argument fails to convince because she failed to document her evidence thoroughly, and there's a tone of 'dirty old broad [3] getting her rocks off, heh heh, that detracts from the argument and debases the premise. [4]

In this article, Diane said, "Spock can happily love Kirk all he wants and not feel that it is un-Vulcan...in this stage of his emotional development, Spock is not and could not be any woman's man." At the time I thought Diane simply meant that Spock was not ready for marriage, and that he loved Kirk in a platonic sense. The article is so subtle—as were most hints of K/S at the time—that readers could interpret it in that manner. This is not the intended interpretation, however. Diane was making an argument for a sexual relationship between Kirk and Spock, which other fans....picked up and began to discuss openly. [5]