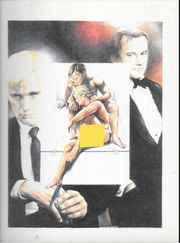 The Pandora's Box Affair is a slash 120-page novel by Rosemary C. The cover is by Suzan Lovett.

This novel is a sequel to the UNCLE Reunion Movie. It suggests a unique explanation for Illya Kuryakin's aversion to the opposite sex.

Napoleon is the consummate Ladies’ Man. Suave and debonair, he knows precisely how to be just what a woman – any woman – wants. It’s one of the many reasons why the charming Mr. Solo is so successful an operative, and of course, it intrigues him that the one thing that causes an adverse reaction in his brilliant but deadly partner is when a lady comes on to him. Napoleon is also, for lack of a better way to put it, a “people person.” Illya, decidedly, is not, so it also comes as no surprise that Napoleon is interested in figuring out just why his Russian partner isolates himself as much as possible.

For a story that has Napoleon recalling how he and Illya became lovers and how their relationship ended, this one takes a couple of fanon old shoes – namely why Illya runs from the ladies; why he joined U.N.C.L.E.; why he’s in Enforcement, instead of a full-time scientist; and what was the cause of the dissolution of the best partnership in U.N.C.L.E.’s history – and runs with them. Rosemary is not only a good writer, she’s also able to deftly interweave fanon and canon over the span of the series, and she uses the dreaded “…‘Fifteen Years Later’ Affair” to frame the piece and make it work brilliantly! She takes the first time convention of for the sake of the mission we must have sex and makes it fresh. Her dialog is snappy, and she distills characterization, setting, and mood like nobody’s business. Although she offers a physical cause for Illya’s behavioral quirks, don’t let that stop you: she keeps him strong and surly, and Napoleon cocky and confident.

This has become one of my favorite stories in this fandom! I cringed right along with Napoleon when I first read about what happened to Illya, but you turned this into such a beautiful and angst-ridden piece that it plays like a symphony. :)

The love that grows between the boys is so genuine, and the love scenes...WOOF! I loved them, not just because they were hot, but also because of the depth of meaning to them. Illya realizing that his body isn't completely unresponsive was just wonderful!

Thank you for this - I had such a great time reading it! It will remain a keeper for me, one which I will reread many times. :) [2]

I loved this story! The sex was HOT. the love warm and Napoleon's growth as he realized what Illya meant to him was written beautifully. [3]

You'll get my Perestrioka, White Rabbit, Lucifer Falling, Whisper of a Kill, Injured Innocents, Choices, Cosmic Collected, Broken Images, Second Grace, Harlequin Airs, Pandora's Box Affair, Primal Instincts 2, I Still Have Plans, and a variety of multi-media zines [out of my hands] only after my body is dust. [4]