I Still Have Plans to Go to Mexico

I Still Have Plans to Go to Mexico is a slash X-Files 111-page anthology by MJ and JiM. The cover art is by Lyrade. 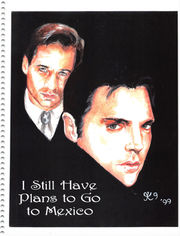 The sequel is A Crack in the Hearthstone.

From a September 1999 interview:

<JiM> MJ and I were on WAY too late at night and we started goofing on each other and well..."I Still Have Plans to Go To Mexico" was born in IM.... <MJ> Um... what do you want me to say? JiM IM'd me one night and said "let's write a PWP."... And the entire Mexico collection -- with some unpublished prequels -- is due out as a zine. [1]

From a distributor, Agent With Style: "Mulder makes the decision to take life by the horns and proposition his superior--but how he does it will have you rolling in the aisles! The love between Mulder and Skinner grows as time passes, becoming all-consuming, but not so much that they can't make room for a third when Krycek shows up in town. Mulder tracks him down and saves his life, then brings him home to an understandably upset Skinner. But through gentle patience and perseverence, Mulder gets the two men in his life to grudgingly like, then respect, and finally love one another--even when Krycek leaves town to exact revenge upon some bad guys. Will he return to his lovers--or is it Mulder and Skinner alone again?"

© April, 2000. I Still Have Plans to Go to Mexico is a publication of Agent With Style and does not intend to infringe upon the copyrights or holdings of Chris Carter, Fox or 10-13 Productions. All rights revert back to the authors and artist one year after publi cation. No bribes of sleep, sleep and more sleep; yet another clone of me, or John McDonald's gold watch were offered. Dammit. Laugh. Cry. Send LoCs!

This tale is still one of our personal and secret favorites. We had fun. I have to tell you, though, it wasn't cliched when we wrote it. There had been ONE piece of M/Sk/K fic out there and that wa Torch's "Anniversary". Kass produced her wonderful "Cold" piece while "Mexico" was still in beta and we all yowled at one another before calming the heck down and giggling at the Jungian gutter (sub) conscious that seemed to be XF slashdom. [2]

Jeeeeez, I can't believe I bought this. It's a great story, but there was only one story in the zine that hadn't been previously published on the net. To add insult to injury, that one story was short. Save your money for the sequel which might even show up sometime this year, but don't hold your breathe. [3]

Oh, man. I am just such a sucker for people who can make you buy a trio. <g> Anyone having trouble believing that? And this... modern poetry, and X-Files, and retired Feds, and retiring assassins.... This thing is, or should be, a classic. [4]

It's difficult to make threesomes work for anything longer than a sex scene, and it's almost impossible to maintain a light-hearted tone in a long story, but MJ and JiM managed it. There are serious moments, and some very moving scenes, but I reckon when most people remember this story it's with a goofy smile. When 'Mexico' first appeared, readers were surprised to have such a long story appear from these authors, and perhaps were wondering if they were in for a long angsty saga. Both JiM and MJ were well-known and much liked in X-Files slashdom for their short, pithy stories. (MJ's Pencils series, and JiM's Houseboat variations are classics.) But the surprise quickly turned to delight, as they wallowed in the witty dialogue and great sex! Scully doesn't get much screentime in this story, but she does get one of the best lines, and since it's also a succint explanation of the initial setup, and gives a good flavour of the writing style... In some ways the story is cliched (or perhaps it invented some of the cliches!) with its elements of hurt Krycek being cared for by a Skinner and Mulder who have set up home together with a cat and a dog. Skinner's the pillar of the community, Krycek singlehandedly brought down the Consortium, Mulder is ... Mulder. Yet it still seems original on a re-read, and I think that's down to the skilled writing by both authors. A treasure to enjoy. Mulder brings Krycek home with him, and Skinner lets him keep his stray. [5]

You'll get my Perestrioka, White Rabbit, Lucifer Falling, Whisper of a Kill, Injured Innocents, Choices, Cosmic Collected, Broken Images, Second Grace, Harlequin Airs, Pandora's Box Affair, Primal Instincts 2, I Still Have Plans, and a variety of multi-media zines [out of my hands] only after my body is dust. [6]