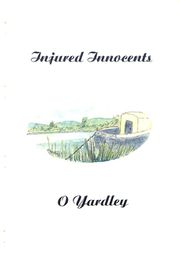 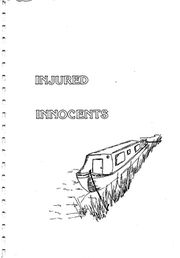 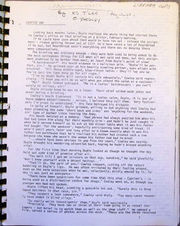 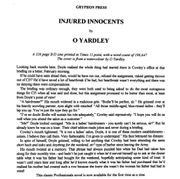 It was originally an older 286-page circuit story from the 1980s and available in the Proslib before being issued as a zine.

It is a story on The 1985 Hatstand Express Top Ten Lists. And it was among the first "favorite Pros novels" mentioned on the Virgule-L mailing list when it launched in October 1992, along with Rediscovered in a Graveyard, Camera Shy, Of Tethered Goats and Tigers and Bear Necessity.[1]

In 2014, some fans had a discussion about Island Innocents and its relationship to "Injured Innocents":

Oh, interesting - I can't imagine not liking their characterisation in this one. You're not thinking of Injured Innocents are you? I know I thought their characterisation got a bit soppy in that one (though it started off well). Island Innocents is very different and not at all soppy (but beautifully affectionate... *g*) I think I remember that the title Island Innocents was a response of some kind to O. Yardley's Injured Innocents...[2]

Looking back months later, Doyle realised the whole thing had started there in Cowley's office at that briefing on a bitter, February morning.

If he could have seen ahead then, would he have run out, refused the assignment, risked getting thrown out of CI5? He'd have saved a lot of heartbreak if he had, but heartbreak wasn't everything and there was no denying there were compensations.

The briefing was ordinary enough, they were both used to being asked to do the most outrageous things for CI5 when all was said and done, but this assignment promised to be better than most, at least from Doyle's point of view!

"A hairdresser?" His mouth widened in a malicious grin. "Bodie'll be perfect, sir." He grinned over at his heavily scowling partner, eyes alight with mischief. "All those middle-aged, blue-rinsed ladies - they'll lap you up. You' re just the type they go for."

"I've no doubt Bodie will sustain his role adequately," Cowley said repressively. "I hope you will do as well when you attend the salon as a customer."

"Me?" Doyle looked outraged. "Me in a ladies' hairdressers - you surely can't be serious, sir!" But he already knew he was on a loser. Their chief seldom made jokes and never during a briefing.

Cowley's mouth tightened. "It is not a ladies' salon, Doyle, it is one of these modern establishments - unisex, I believe they call them. Very fashionable, I'm given to understand." His face betrayed his distaste.

In spite of himself Doyle grinned, willing to bet anything that Cowley had been attending the same short back andsides and Anythingfor the weekend, sir? type of barber since leaving the Army.

His mouth twisted at a memory. That phrase had always puzzled him when his Dad had taken him along for their monthly trim - and hadn't he just caught it when he'd nerved himself up to ask at the dinner table what it was his father had bought for the weekend, hopefully anticipating some kind of treat. It wasn't until years later and long after he'd known exactly what it was his father had purchased that he'd realised his mother had created such a row because she knew she wasn't the woman his father had had in mind!

I'm in love with Cyprian. The small characters were just as complete, believable and likable as Bodie and Doyle. Jennet was a real winner. Are you sure, O. Yardley, that you don't write an occasional closet straight story? If ever a girl deserved to win it was her.[3]

"Injured Innocents" is one of the best B/D novels I've ever read and I suffered a really bad case of eye strain because I couldn't put it down; the "first time" sex scene is one of the most credible in this fandom, solely for its touching imperfection, and it was hysterical that CI5's top operatives couldn't figure out how to work the double bed on that little canal boat their first evening aboard; this is one of the few efforts made to realistically portray several months in the life of Bodie and Doyle, showing us events spanning from the mundane to the exciting, and it successfully sustains long-term cohesion by giving us characters who keep reappearing over time; she demonstrates superb skill at plotting and pacing, and her characterizations are entirely credible in this piece.[4]

I have since read most (that's all I was given) of a Profs novel called Injured Innocents in which Cowley, upon receiving a threat of blackmail and photographic 'evidence' of Bodie and Doyle being lovers (it was only a drunken embrace, m'lud), decides to simply brazen it out on the basis that if Cowley doesn't care, then no one in CI5 (and later the world...) will ever be blackmailed over homosex again. (Poor old Bodie and Doyle, meanwhile, are miserable cause they're both hankering after something they're only pretending at for Cowley's sake.) Anyway, it was a well-written premise, and one I found interesting. Hell, I liked it! If it wasn't wholly realistic for the Profs, in an ideal world, it would have been. [5]

The *best* of *all* elements... Seduction: mutual Suffering: equal Who was on top first? All I remember is the first one to try wasn't able to at first...lost his erection looking at his great big cock, and that little tiny hole...<snicker again> [6]

285 pages of wonderful stuff, loads of plot, good characterization; try to keep a stiff upper lip during the meandering canal boat trip, it gets back on track afterwards [7]

I think Injured Innocents could very well qualify as a paradigmatic slash story. I personally hate the story, for other reasons, but it is slash. The characters are basically straight, but external circumstances (the overheard phone call, the undercover situation) push them to look at each other in a different light, i.e., sexually. After due anguishing over the possible repercussions of crossing this line, the characters reveal their feelings to one another, and surprise! finds the other feels the same, and their sexual experience is like none other. They quickly discard sexual categories in favor of 'this relationship' and live happily ever after (or not so happily, in a few cases).[8]

As for Injured Innocents, around [here locally] it is known derisively as The Love Canal - ok until they get on that boat. I enjoy the boat bits myself, but the Pros fans who introducted me to fanfic all agree that the story gets repetitive and dull when the lads do nothing but bonk each other. These are not people who care much for the PWP.[9]

Long enough to keep anyone happy, this one captures the feeling of life as she's lived - you know? - the very texture of daily existence for Our Boys, I love the looong slow build-up to their realisation of how they feel, and the way its integrated into a series of interlocking cases. Plus, there are the other characters we meet along the way- (Jennet is a joy, not to mention dear Cyprian-) And it's got the best first kiss I've ever read - so diffident and scared and true. Mmmm.[10]

'Injured Innocents'" is one of my wallow zines. When I'm feeling low, it's a great one to revisit.[11]

I've always been very fond of Injured Innocents. It's a long, slow-developing story, but I find it works beautifully as a comfort read for me. It's for those times when I want to disappear into another world, where things work out without too much angst. *g* I like the set-up for the development of their relationship very much, and I really like the first time they come together--it's a sort of erotic disbelief, and I can see them going for it. *g* I've heard a lot of people say it goes on too long, and there isn't enough to hold their interest. I can see that, but when I'm in a particular mood (like way over-stressed), this is one I reach for.[12]

I'm afraid I'm one of those people. I'm on my second attempt trying to make my way through it and still have yet to get to the canal boat. Every time I try to read it there just seems to be absolutely no compelling narrative reason for me to continue. So I don't. However, given the enthusiasm expressed here, I'm going to give it the old college try this time 'round.[13]

Oh I adore Injured Innocents. It's one huge story with little stories weaved in and around, and I thoroughly enjoy it every time I read it. It's a first time - my fave - and I love the thought of Bodie as the hairdresser in those wonderfully tight jeans, and Doyle not tipping him as he should, and starting what the owner of the hairdressing shop (forgot his name temporarily, sorry!) thinks is the Romance of the Century.

And the holiday/honeymoon on the narrowboat is what makes it so special. I'm with them every step of the way, and loving them not finding out about the beds on board and the problems they find with having a holiday on the canals. Always gives me a really good feeling whilst reading it, and definitely one for a first-time fan's collection.[14]

You'll get my Perestrioka, White Rabbit, Lucifer Falling, Whisper of a Kill, Injured Innocents, Choices, Cosmic Collected, Broken Images, Second Grace, Harlequin Airs, Pandora's Box Affair, Primal Instincts 2, I Still Have Plans, and a variety of multi-media zines [out of my hands] only after my body is dust. [15]

O. Yardley is a fine writer, and this is a very readable and engaging story. Described by some as "the classic long romantic first-time novel of this fandom." [16]

A total hoot. Sweet without being saccharine, and laugh-out-loud funny. And the plot is one of those convoluted bits in which everything you can think of happens to the boys. One of my favorites.[17]