You may be looking for Lucifer Rising, a Xena zine. 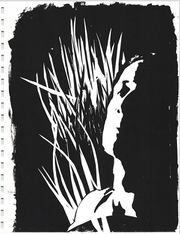 Lucifer Falling is a slash 132-page Highlander novel by Kitty Fisher. It contains no inside art. The cover art is uncredited.

Summary from the author's website: "Duncan must deal with both his anger and his love for Methos - and the deadly influence of Kronos' personality, which he has absorbed through the Quickening."

From a Resch's flyer: "Post "Comes A Horseman" and "Revelations 6:8": Duncan Macleod fights the effect of Kronos' memories, which he absorbed during the Quickening. And though he is acting out of love for Methos, Kronos is determined on revenge..."

Summary from a distributor, Agent With Style: "Methos is on the run, doing his best to get away from Duncan because the Highlander has just taken Kronos' head and now knows exactly what the brutal Horseman had forced Methos to do in his bed all those thousands of years ago. How could Duncan possibly love Methos now? But Duncan comes to realize that, while his new memories might make it look like Methos was enjoying being chained up and beaten during sex, it was the former slave's only way to survive a dangerous and uncaring master's whims. Now all Duncan has to do is find Methos and tell him he understands, and that love -- true love -- can conquer anything. And then get the Immortal who has seen everything and done everything to believe him."

This story was written at great speed, in about seven weeks, which as anyone waiting for my Doctor Who novel will tell you, is FAST! I watched "Comes A Horseman" and "Revelations 6:8" and that was it, I stopped reading, watching TV, sleeping, and wrote. Oh, I did go to work, though only because if I hadn't gone, I wouldn't have been paid, and however loud the Muse is being (and Methos was a noisy bastard from time to time) the rent still has to be paid!

Before Methos I had seen no Highlander at all. Methos converted me, obsessed me, and made every other project I was involved in disappear from my brain. He is the most fascinating character, played wonderfully well. I fell in love with Methos, and then with Macleod almost by default. Kronos added a certain interest all of his own. I hope I have done them justice.

"Three people died, Joe," Methos answered softly, staring at his hands. "One I despised, and have done for three thousand years, one I liked and yet who I killed myself, and one...well..." His face twisted as the sentence foundered.

"Even though he didn't know the truth about you and Kronos?"

Methos shook his head slowly. He leant heavily against the bar, the knuckles of his hands white where they gripped together.

"Not about back all those years ago?" Joe took the slight movement for a negative. "Or here?"

"I didn't tell him! What do you think I'm made of?" Methos blinked, the skin around his eyes pinching. "But, since he took Kronos' quickening, I should think he knows everything..." His husky voice tailed off.

The name hung between them, and all the ease evaporated as if torched in gasoline.

Methos breathed in hard, his nostrils flaring slightly. Truth finally had to be spoken. "I knew I couldn't take him, not and remain sane. Too many of the memories were too close, too..."

"Awful?" Duncan supplied the word, weighting it with derision.

"Yet you thought I'd be able to deal with them without any inconvenience, so you manipulated me into killing him."

Methos almost snapped back with a defense of himself, but truth was truth, so he simply admitted, "Yes."

"And trusted that I would have the strength to withstand the evil in him?"

"How could you! I can still feel him, like evil echoing inside me."

Duncan turned and bitterly glared at the other man.}}

I was very disappointed in it. Characterisation all wacky (Methos is *way* Britted up, consistently declining beer in lieu of tea among other things) and the story was sloppy. [1]

You'll get my Perestrioka, White Rabbit, Lucifer Falling, Whisper of a Kill, Injured Innocents, Choices, Cosmic Collected, Broken Images, Second Grace, Harlequin Airs, Pandora's Box Affair, Primal Instincts 2, I Still Have Plans, and a variety of multi-media zines [out of my hands] only after my body is dust. [2]