You may be looking for the Sentinel story by Dolimir called Choices. 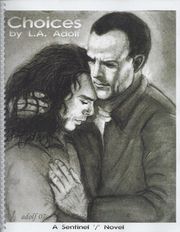 Choices is a 226-page Sentinel slash Jim/Blair novel by L.A. Adolf. The cover and interior art is by the author.

The three stories which make up this novel were once online but have been edited for publication.

The first two stories are gen. The online versions have both a gen and a slash version of the third story. All online versions slash and gen have been removed as of 2012 by author.

"When Blair is refused admittance to the Police Academy due to medical reasons, it's the beginning of a new journey for Sentinel and Guide, one fraught with revealed secrets, danger and loss, and the very real possibility Blair could die."

You'll get my Perestrioka, White Rabbit, Lucifer Falling, Whisper of a Kill, Injured Innocents, Choices, Cosmic Collected, Broken Images, Second Grace, Harlequin Airs, Pandora's Box Affair, Primal Instincts 2, I Still Have Plans, and a variety of multi-media zines [out of my hands] only after my body is dust.[1]