Second Grace is a Mulder/Krycek X-Files novel by A. Dales wit a cover by Marcia Elena. It was published online and later as a 250-page print zine. 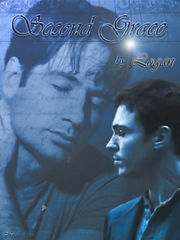 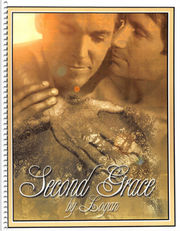 print zine cover
Summary from a distributor, Agent With Style:

Finally freed from the Consortium, Alex Krycek has gone home to Baton Rouge, Louisiana, now that it's safe to do so. There, known as Alex Drake, he attempts to start over, getting to know his three sisters and their families once more, reconnecting with them after a long absence from their lives, while he mourns the abduction and possible death of his "sometimes lover," Fox Mulder. Months later, when Mulder unexpectedly shows up on his porch in the middle of the night, Alex is overjoyed. Mulder deals with his abduction, and the fact that he might be the father of Scully's baby (through artificial insemination), while attempting to see if he and Alex can ever have anything beyond a sexual relationship. Together they learn that sex doesn't have to be hard and angry, and that love, even if it isn't admitted to, can make having a lasting relationship conceivable between two former enemies. It's a slow course for these two putting their lives back together, recognizing and dealing with their problems, Mulder trying to show Alex's sisters he's not going to break their brother's heart, and Alex trying to make Scully and Skinner believe he's not going to kill Mulder the first time their backs are turned. Peace seems to be at hand -- and then disaster strikes. Scully's baby is kidnapped. Mulder's telepathic abilities return, leaving him no way to handle the avalanche of noise that buries him constantly, causing his brain to spasm, setting off epileptic fits and leaving Mulder closer to death's door each time they end. Alex, Scully and Skinner, along with the Lone Gunmen, must draw together, using every resource available if the baby is to be found, and if Mulder is to survive.

This story is sort of an AU, but not a drastic one. It diverges from canon after Requiem (season 7 finale) and doesn't take into account anything that happened after that. It's in three books. Each equally as good as the others. [...]

Oh, My God!! I love this fic. You are so going to be thanking me for turning you on to this one. [...] It's beautiful, angsty, sexy, smart, long, and so well-written it makes you jealous of his talent. Yes, I did say he. We have a new male slasher breaking out into our fandom in a big way with this fic. This story is told from Alex's POV. In takes place after Requiem. Finally, freed from the Consortium Alex is trying to start all over again. He's gone back home, now that it's safer to do so, and is attempting to begin again. In this we get a glimpse of Alex's family and his efforts to reconnect with them after a long absence from their lives. We also see Alex mourning the abduction and possible death of his "sometimes lover" Mulder. Mulder gets returned eventually, of course. We then see Mulder doing something he never did in canon, wasn't allowed to do really. He starts trying to deal with his abduction, the fact that he might be the father of Scully's baby (Through insemination in this fic, Thank God!), and attempting to see if he and Alex can ever have anything beyond a sexual relationship. It's a slow course for these two putting their lives back together and trying to figure out if they can have a real relationship. It's how very grown up the characters are in this I loved. How they try to deal with their problems and work on them. [...] Ok, so the Alex's voice in this fic is very similar to my AlexMuse's voice. That's probably a factor of why I like it. Plus, the southern thing. I felt nostalgic for the South and I live there. It's a wonderful fic that you should not miss. One of the best I've seen come along in quite a while. This one has renewed my faith that there is hope for the M/K fandom. Fics this good are what keeps it strong. I absolutely love this one. I'll practically beg you to read it. You won't be disappointed, I promise you. [1]

This is one of the best M/K fics I have seen come along in this fandom in a good long while. I absolutely fell in love with it right away. It's nice and long. Rich in detail. Beautifully written. I just honestly can't say enough about it. I've been trying to spread the word to as many people as possible about it ever since I read it yesterday.

It's a post-Requiem fic that doesn't take into account seasons 8-9. Krycek tries to build a life and reconnect with his family once he finally frees himself from the Consotium. While trying to mourn the loss of his sometimes lover Mulder (who was abducted in Requiem).

Mulder eventually gets returned and begins to deal with his abduction. The fact that he may be the father of Scully's baby. (Neither of which TPTB ever let him do.) Plus, he's trying to see if maybe he and Krycek can really have something real.

It's an absolute must read. I loved it and knew I had to rec it right away. It will appear on the site in the next update, but I didn't want to waste time and have anyone let this gem slip past them. [2]

I loved this series, the writing is so perfectly Alex, and the characterization (I just know that word is spelled wrong) is Dead On. It's probably the reason I'm so addicted to the series. Logan hasn't forgotten who he's writing about, like a lot of authors tend to do when writing a series. Each book has amazing story lines and the writing is beautiful, tragic, amazing. A HUGE rec for this story- go read now! [3]

This is a long, plotty, angsty, schmoopy fabulous story told from Krycek's first person POV. It has the feel of a real episode, to me, with the additional bonus of hot slashy sex - what more could you want? [4]

You'll get my Perestrioka, White Rabbit, Lucifer Falling, Whisper of a Kill, Injured Innocents, Choices, Cosmic Collected, Broken Images, Second Grace, Harlequin Airs, Pandora's Box Affair, Primal Instincts 2, I Still Have Plans, and a variety of multi-media zines [out of my hands] only after my body is dust. [5]