The Slash Slut's Recs was a slash recommendation site by ladyclio16 where the motto was: "One guy is hot, but two are hotter." Recs usually offered long and detailed insight into what the reccer liked and disliked about about a story.

Slash Slut's Recs was mostly a Mulder/Krycek rec site and then branched out to other big slash fandoms of the late 1990s. Although many links are dead now the site still gives a good impression of what online slash fandom looked like at that time.

From 1999 to 2016 there was an active forum on Network54 under the name Slash Sluts Multifandom Recs Board.

Since 2007 it has a LiveJournal Community, which unfortunately stopped being updated in 2010.

Below is a list of fandoms with their own page in the The Slash Slut's Recs site: 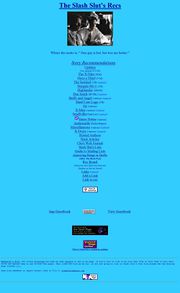 Screenshot of the index site

In addition to the recs the site featured: