A slash slut is someone who is a fan of same-sex fanworks in multiple fandoms. 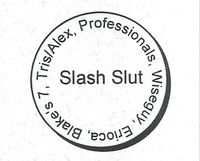 It is a term that was popular in the early-to-mid-1990s and referred to anyone who was interested in more than two or three slash fandoms.

"Slut" was also used to mean "to be an avid fan of something."

The term is used in an endearing way, often self-referential.