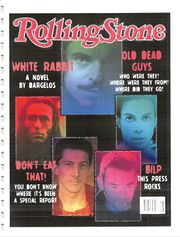 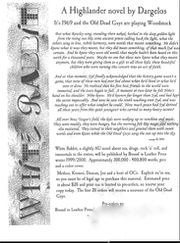 The book design was by Jean.

It has a "prequel of sorts" called "Pomegranate Seeds."

Welcome to the world of the Old Dead Guys, the greatest rock band that never was. Maybe you're an old time fan and you remember some of their great original tracks like Quickening/Ecstasy or Take Him Out Back and Rough Him Up or their fantastic covers of oldies like The Great Pretender and Falling in Love Again. Maybe you're a new fan, and you've just heard them for the first time. And maybe you don't know anything about them. Doesn't matter. Everyone is welcome here! [1]

A slightly A/U novel by Dargelos about sex, drugs, rock'n'roll and an immortal rock band -- Old Dead Guys -- set in the '60s, the '90s and pre-history. Watch Duncan/Methos, Methos/Kronos, original characters/everyone get it on whenever they get the chance.

While the style of the writing and premise assumes the band is "real," according to the author, it is NOT based on a real band. "I don't do Real People Slash, I don't like it. You won't find any here because whether I think it's your right to read/write it in private or not, I think publishing it is stupid. End of rant." [2] [3]

A similar fanwork is Bird of Paradise, a coded-RPS novel based on Led Zeppelin, crossed with Starsky & Hutch.

The characters are fan casted.

The People: As with most of what I write, my original characters are as real to me (sometimes more so) as the ones borrowed from the fandom in which I’m working. They have histories, and yes, they have faces, and though I’m all for letting each of you make up your mind as to who you see in the various roles, in this case my own choices are so vivid that I thought I’d share them with you.

Rowley – Now surely most of you know who this is supposed to be in terms of the text, yes? You do recognize Charles II of England? Specifically I’m thinking of Sam Neil’s wonderful portrayal of Old Rowley in “Restoration.” If you want Rowley, there he is.

Prez – Think Michael Wincott as Moxica in “1492” with the long black hair and the ‘tude (though I think Snoo, Karen and now Kat may be thinking more of his role as Top Dollar in “The Crow.” Delicious and nutritious, yes, but I prefer Moxica.) And later, vintage “Alien Resurrection,” with the brush cut that makes his cheekbones pop out even more. Yum.

Ramesses – Prince. Excuse me, the Artist Formerly Known as Prince. I’m not really a fan of his, but there is no one else who could have been Ram.

Niño - Possibly most of you are familiar with Joseph Feinnes from “Shakespeare in Love,” but if you have a chance, check out his small but tasty role in “Stealing Beauty” and enjoy the blond hair.

Originally there were photomanips accompanying this story. At an unknown date, they were removed by the author with the statement: "All "photos" have been removed. Sorry."

The Pictures, a disclaimer: Without exception the art at the beginning of this story is based on pictures that have nothing to do with the people whose faces I imagined as I wrote this story. And in fact, about one third of the photos I used were of no one in particular, but so close to what I wanted, that all I really did was some computer fiddling to suggest more of a resemblance than there really was. Of the rest, the bulk are simply portraits. All pieces of art of people in intimate situations have been composited and tinkered with into submission and are, I hope, more recognizable as my characters than as any real individual. What I mean is that anyone who can’t tell the difference between a heavily altered photo and the real thing should be advised that none of this is the real thing, and none of it is intended to imply any relationship between any two real people. And if you still think it does, you have more problems than I can ever solve with a disclaimer and I suggest you get a clue. [5]

Welcome to the world of the Old Dead Guys, the greatest rock band that never was. Maybe you're an old time fan and you remember some of their great original tracks like Quickening/Ecstasy or Take Him Out Back and Rough Him Up or their fantastic covers of oldies like The Great Pretender and Falling in Love Again. Maybe you're a new fan, and you've just heard them for the first time. And maybe you don't know anything about them. Doesn't matter. Everyone is welcome here!

Hey, big news! I hear that White Rabbit, a story of the band, is out in zine form! If you're interested, contact zines@agentwithstyle.com and ask for "White Rabbit" or check the Agent with Style website. This is the inside, inside story, gang. Michael Altman worked closely with the author and I understand she had some help from a few people who have long been MIA if you get my drift.

I realized that I didn't have any good group shots of the guys, and was afraid I'd have to scan in the old album cover (it's pretty beat up!) but I got the jewel box inserts from the re-release of ODG Rock from one of my sources (Thanks M!) and he said I could share it with you all because the album release is going to happen soon anyway. Is this cool or what? Look for the album in your stores in late summer of '99.

So, if you don't know anything about the band, you need to start learning. From left to right [in the accompanying photo]: El Presidente (Prez), Rowley, Ramesses (Ram), Firstman and Chaos. [6]

The author's notes: A note about this story. Really..

The Migration of an Original Character

OC journalist Michael Altman is also in the story Just Like My Old Man.

Most recently, BiLP is involved in publishing a Highlander novel by Dargelos entitled "White Rabbit." WR will be available from BiLP in the late winter or early spring of 2000 as a limited edition. Later in the year publication will pass to Agent with Style. [7]

Where is White Rabbit? (The sort-of sequel to Pomegranate Seeds) WR has been sent to Agent With Style for publication. I cut a deal with AwS to hold back on web publication for at least six months, at which time we'll assess the situation and negotiate for another six months. At most, it'll be March of 2001 before it hits the web. However, if you're interested in the zine, write to zines@agentwithstyle.com and inquire. I believe the price is set at $20 in person for a zine that runs just shy of 200 pages, including pics and a color cover. AwS will also be at a number of conventions over the next months, so check the site and see if they'll be anywhere near you.

Until then, why don't you check out the site for the Old Dead Guys [8]

The story was posted on Dargelos' website in 2001, but has since been taken offline.

Dargelos' White Rabbit (seems to be off the web again, blast) takes distinctly different slant on Methos' history. Dargelos writes so well, edgy, real fiction: this is a woman who's been there and knows what it smells like. I'll read everything she writes, from the humour of her Merry/Pippin short to the extended angst of the Oz series Damaged Goods. White Rabbit takes the image of Methos' 1960's band The Old Dead Guys and runs with it, with such style. I'm not going to mention plot. Just read it. [9]

Sweet Jesus. I don't believe this. Rock and roll, and the '60s and everything that damn well just might have happened. Long, long fic, people, and worth it. [10]

For anyone else who, like me, has a soft spot for bands long gone, there's a new book out that you might want to take a look at: White rabbit by Dargelos. This isn't exactly your typical rock band bio, though. Sure, there's lots of good stuff about the band on the road (and if they got up to even half of what the book says... jeez), but there's no doubt that this is a fictionalized account of a band that's sorta-kinda the ODG but not really, and the fantasy elements get a bit weird. I'd've bought the sword-fighting, but the magic healing powers... nope. And the idea that the guys meet up in a blues bar thirty years later looking none the worse for wear, except Chaos, who's dead after having gone more insane than usual, is as implausible as having the guy who killed him there with the others.

But I guess it's almost irresistible to create a mythos around a band as intriguing and mysterious as the ODG, and the immortality idea is pretty original in a business where it's usually the ones who die young and stay pretty who get to be legends. And talking about pretty, this book is worth getting for the pictures alone. Yum. [11]

You'll get my Perestrioka, White Rabbit, Lucifer Falling, Whisper of a Kill, Injured Innocents, Choices, Cosmic Collected, Broken Images, Second Grace, Harlequin Airs, Pandora's Box Affair, Primal Instincts 2, I Still Have Plans, and a variety of multi-media zines [out of my hands] only after my body is dust. [12]

On September 21, 2010, Dargelos, the author of "White Rabbit," left a message on Fanlore indicating that she has withdrawn permission for the zine to be sold in print format by Agent With Style and is taking steps to remove the story from online archives via the Wayback Machine.

While Fanlore cannot regulate the behavior of fans or of third party content providers, it provides this notice as a courtesy to the author and to fans. This is not an official message on behalf of Fanlore, but rather a statement that two volunteers drafted to help communicate the author's intentions. As such it may be subject to further edits and changes.