Beholden to the Earth

Beholden to the Earth is a gen 98-page Alien Nation anthology.

The cover art is by Dana Lajeunesse and interior art by Donell Meadows. 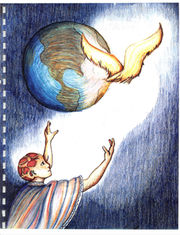 Back in the spring of 1990, I was stunned to hear that Alien Nation had been canceled. This was, in my opinion, the best new show I'd seen on television in many years. It just didn't seem possible that such a high quality show could be canceled. I followed the rumors — that Alien Nation was coming back, that it wasn't coming back, that there would be two wrap-up television movies. When the television movies were nixed, I realized that the only way to keep the show alive would be to write my own episodes. I started writing Alien Nation stories and sharing them with friends who also missed the show very much and were starved for new material. Eventually, I decided to do a zine, and put out a call for submissions.

Hopefully, this is just one of the many Alien Nation zines that wil be created in upcoming years. I believe that the only way we'l ever see Alien Nation return in any form is by keeping the fandom alive.

I wish to dedicate this zine to the cast of the television series. Alien Nation, for portraying their characters with sensitivity and with chemistry rarely seen on television, to the writers of the show, for producing week after week of excellent scripts, and most of all to Kenneth Johnson for having had the vision to make it all possible.

PART ONE: BEFORE FIRST SEASON: