Farpoint is a Star Trek and multifandom convention.

Cons with actors, like Shore Leave, Farpoint, Visions, Unicon, Anglicon, including professional for-profit cons such as those run by Creation. People may sell slash there, usually 'under the table,' but there (probably) won't be panels about it.[1] 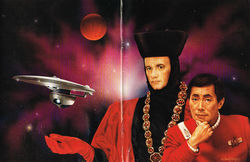 The Kitty Hawk away team for this event was a little smaller than usual (myself, Larry, Jeff and Robert) (budget constraints, I suppose - the Captain doesn't want to pay hazardous duty pay to so many of us. You know how dangerous those Dealer's Rooms can be). Anyway, our intrepid crew ventured out of Starbase Raleigh on Thursday evening in a rented luxury shuttle, arriving at Farpoint Station around 2:00 a.m. to find the advance scout vessel piloted by Diana Waldier had already made camp. On Friday we did. the usual - registered, checked out the dealer's room, and headed for the Mall. We did. learn that George Takei would not be present for the con, having found real work on a movie filming in Romania. I was sorry to miss him, but happy that he is working. The substitute guests were William Campbell (The Squire of Gothos) and June Lockhart. They were joined by regularly scheduled guest John de Lancey. But back to Friday. As usual, Friday was a slow day, but Jeff took in the auction and walked away with a reasonably-priced set of bone china dinnerware. We then went in search of dinner, wound up in Towson where we found a nice seafood restaurant which we will probably visit again on future trips. Then it was back to the hotel to check out the Friday night version of Ten Forward with a live band. Well, the band was not so good and what they played, when they weren't on a break, was not very danceable. The dance was sparsely attended, and we gave up on it early and headed off to bed. Saturday held promise of being better. The first thing of interest scheduled was a play, Little Ship of Horrors. We stayed 5 minutes. It was horrible. Later the guests were talking. All of the guests were interesting. William Campbell was friendly and sociable and had lots of stories to tell. I missed much of the other folks waiting in the autograph line. After dinner, we decided to head on down to the costume contest. We had counted on it starting late, as usual, and wouldn't you know it, this was one of the few things the Farpoint Committee did right. it actually started on time, so we missed most of it, as it was also quite short. And the judges made their decisions quickly for a change, so the whole thing was over by 9:30. I thought great, maybe the dance will start on time for a change. No such luck. They decided to run Rocky Horror before the dance, and it must have started late. Suffice it to say that when we checked in at 1:30 a.m., they seemed to be about ready to start. A few people seemed to be having a lot of fun at the expense of the rest of the con-goers, and I think these were the people supposedly running things. We decided to go to the intergalactic House of Pancakes and forget about the dance. Unfortunately, what used to be one of my favorite parts of any convention, the Ten Forward dance, seems to be dying out. The dances have been progressively worse lately and both of these were complete disasters.

As for Sunday, we stuck around to hear a little of the talks and spend a little more money in the dealer's room. John de Lancey and William Campbell performed a skit written by Peter David on the origins of Q. Seems he's Trelaine's delinquent son who got sent off to the Q Continuum (the omniscient beings equivalent of military school) to be straightened out.

Our shuttle made it back to Raleigh without incident. All in all, we had fun, despite the lack of anything interesting about the convention. Farpoint was in many ways an example of how not to do a convention. Quite frankly, some of us feel inspired to attempt a con of our own, just so we can do it right.[2] 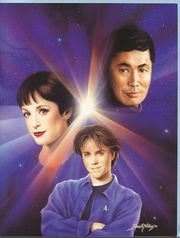 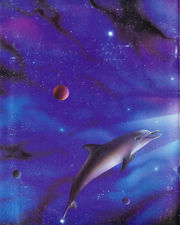 backcover of the 1994 program book, art by Sonia Hills

From the con chair, Steve Wilson:

Welcome to Farpoint! And welcome back to those of you who came last year. Wow, that second year of existence went by FAST.

For those of you who did support Farpoint last year, I doubt youll find very much different at Farpoint '94. Well, the Ten Forward is back on Saturday (and it's never leaving \GAIN!), and the guests are different, but the spirit of the con is the same.

And what, old hands and newcomers alike may ask, is the spirit of Farpoint? Well, I'm a;lad you asked me that (he said, reaching into his bag of tricks). Simply put, Farpoint is not just another Star Trek con. "Hey!" you exclaim, "Dis guy don't like Star Trek!" No, no, a thousand times NO! I love Star Trek, as does everyone at Farpoint; but there's more to life than Star Trek. There's a veritable cornucopia of S-F and Fantasy media out there, just waiting for us to open our minds and let it in. Why not explore it? Why not celebrate it? So, with apologies to those few of you who can't stand to have any other genre invade your convention, Farpoint will continue to grow outward, never forgetting that it was Star Trek that made fandom as we know it possible.

And now that the F-word has reared its horrific head (the F-word is fandom, of course), let's talk about what Farpoint wants to do for fans: we want to take your money, throw a couple of actors at you, and let you have the privilege of spending money in our dealers' room. No!—sorry, that's those other people. You know, the ones with the ten-to-five cons that treat the fans like cattle? No, Farpoint has a different goal. We're not out to collect all the money we can, we're out to keep fandom alive, and, with it, fan-run conventions.

Fandom used to be about producing, as opposed to consuming. Fans used to produce fanzines, run conventions, create artwork—be it paintings or costumes. Many fans writers, artists and entrepreneurs from years past have names you know now as respected professionals in fields that fandom helped them enter. Ever heard of Howie Weinstein, Bob Greenberger, Margaret Clark or Sonia Hillios? They were all plain fans once, and their love of Star Trek led them to become producers. Obviously, it paid off for them. It can pay off for you, too.

That's what Farpoint is all about. This weekend, while you enjoy the con, look for ways that you can help to make it better. If you see a painting, a costume, a play, and you think, "Well, I could do that!"—Do it! Become a producer, not a consumer.

Fandom can be whatever we choose to make it. If we don't choose to make it anything, then it will degenerate to a feeding ground for people who just want to take our money, not offering very much in return. 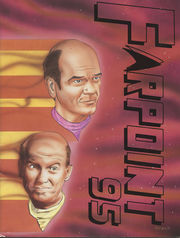 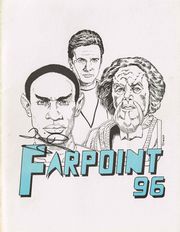 front cover of the 1996 program book

This was the first year that the con had a con zine. See Encounters.

In 1998 the convention had to move to the Omni in Baltimore due to hotel contract problems, and attendance numbers dropped to 460.

The convention returned to the Marriott Hunt Valley Inn for 1999, where it remained until 2009 when it moved to the Crowne Plaza Baltimore North,

There was no Farpoint 2001, since 2000 was held in October, and then the decision was made to move the con to February. Four months seemed a bit close for the next con!