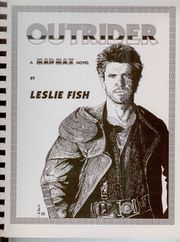 index to filks and songs in the zine, many by Leslie Fish

Outrider is a 178-page (179,500 word) slash and het novel by Leslie Fish. It has the subtitle, "A Mad Max Novel." Art has been included on Fanlore with the publisher's permission.

A summary from Media Monitor: "Max reclaims his humanity and his future."

From the title page: "This is a little outside the main focus of our publications, in that it is available to everyone and is not primarily graphic and/or explicit media. We were so struck by this novel's quality that we were determined to publish."

True fans love filling in all the little gaps, answering all the odd side-questions left by the movies, and, I'm no different. Besides being fun, this speculation sometimes leads to new stories—like this one.

[Fish lists many speculations and gaps...]

Much has been said about Max being a legendary hero, but bear in mind that he's still not a demigod. He's mortal, with an ordinary human lifespan, and the kind of life he's been living tends to age a man fast. He can't go on like this forever. Sooner or later, age or disease or injury will slow him down; then the Bad Guys will jump him for good, and drag him down to a miserable death. Max deserves better than that, and legends provide a way out. Countless folk-tales tell of the lone wandering prince/knight/wood-cutter's-youngest-son/etc. who comes into a land beset with troubles, kills a dragon or performs some other heroic task, wins the hand o f a princess and settles down to live happily ever after. It's high time

Max got some happy-ever-aftering; he's certainly earned it. Well, I put all these ideas together—added a polygamous berserker, a one-legged giant, a wise old fairy godmother, a pack of jolly pagans, a wandering circus, a wagon-train heading west, a leftover army, a little back-to-the-roots technology and a golden unicorn—and came up with this story.

Even from across the room, this MAD MAX novel promises blood and soul-searching; I was hooked from the beautifully designed, stark gray cover that features a loving portrait of the lead character to the very end 178 pages later. Though a bit out of the mainstream of my usual fannish purchases, I found OUTRIDER to be a thoroughly satisfying read--and I believe that any fan of the movies will, too.

The tale picks up a day after the massive desert battle that topped the movie MAD MAX: BEYOND THUNDERDOME. In the tradition as set by the films. Max starts out alone and meets with a group of people with a problem, in this case the Ghetto Rollers, or Just Rollers as one fondly comes to call them. Unfortunately, the Rollers don't live in a nice world and their survival is challenged again and again. Max is employed as a battlewagon soldier and is once again doing what he does best--fighting and winning against impossible odds.

Smooth reading combat scenes are not the only reason to buy OUTRIDER; I was looking for some old home truths about a man who would sentence himself to life in hell--and found them. In a tense scene from novel comes this line... "Tell me, what's the usual sentence given to convicted mercy-killers?" Shocked, Max opened his eyes wide. "F-five to eight years," he whispered. years max. "

If you're looking for a blend of good story telling and real science, then the. incredible research for this post-apocalyptic book and the subtle skill

in which this plethora of knowledge is imparted to the reader will blow you away. Mature, graphic, but never obscene, OUTRIDER is available from Manacles Press. P.O. Box 592, Goleta, CA 93116 with a satisfaction guaranteed policy. [1]

Leslie is a passionate writer and great at world-building; she plunks Max down amidst some very intriguing original characters and then does to him what she did to Kirk in "The Weight." [2]