The Unique Touch is a slash and femslash multifandom anthology.

A sister zine is "touched".

This one is actually both B7 and Star Trek (TOS only, I think), and is the very firmly (and usually explicitly) slash, but also quite biased towards A/V on the B7 side, though not exclusively - and it has the odd femslash piece, too! They are quite basic issues, but the stories I really enjoy. It also has letters and surveys, which I find interesting as documents of the time. [1]

[zine]: I enjoyed both [stories in the zine The Unique Touch #2] (though personally I preferred the second) and found them well-written with a good feel for the characters. The first, "Nearly Beloved/Rogue," is a post-Gauda Prime B/A story by London Bates. Avon, Blake, and Tarrant have survived and the plot revolves around Blake's and Avon's attempts to come to terms with their memories of Gauda Prime and how it affects their feelings for each other, while Tarrant alternately tries to help and gets in the way. There is a fair amount of explicit sex (including a couple of rapes). The characters of Blake and Avon are quite different from usual, due the the deep effect Blake's shooting had on them. In But Love Has Never Known a Law, an A/V story by Jane Carnall, a post-Guarda Prime Avon enters a pre-Star One universe (in which Avon has just died) in order to give himself a second chance with Vila, and becomes involved with the Liberator crew. The central relationship between Avon and Vila is well-drawn, as are the differences in the two universes and Avon's attempts to cope with a second chance. [2] 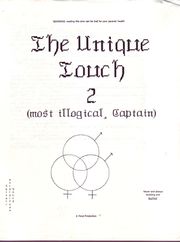 The Unique Touch 2 has the subtitle: "Most Illogical, Captain." It was published in September 1988 and contains 80 pages.

From the editorial of the second issue, one in which the editor states that "I AM ANGRY. "Touched" was started out of anger and it is ending in anger.":

[touched"]... was started for two reasons. Firstly, to have fun. In that it succeeded admirably. Secondly, to do something to change the way media-fandom looks at slash stories.

Well, it's done something.

The line "I'm not really gay, you know, I just fancy you..." is no longer used, at least with serious intent. First-timer stories where neither participant has been gay or bisexual before are still hanging on, but fewer, far fewer. Rape isn't portrayed as orgasmic so much. More stories seem to be written in which the two people are going to bed for some other reason than the author thought it was a good idea.

(Of course, much of this might have happened without "touched", but I like to think that the existence of a lesbian and gay media zine had some influence on the way fans write.)

But there's still a major obstacle.

See, there's this stuff some fans write. It postulates that two of the characters of a TV series are in love/having great sex/or both, and that the two characters are of opposite sexes. It's called slish. (Slosh and slush are generic.)

Slish (like slash) may or may not include explicit sex, and all the variations on the spectrum between a simple statement of a relationship to grossly-detailed sleazy sex scenes; through hand-holding, hugs, conversations in bed and out of it, kissing, and snuggling.

However, slish (when it doesn't go into details) may be printed in non-age-statement zines; slash is not. ("Touched" is the only zine that prints slash that doesn't require an age statement - though an amazing number of people have sent me one. For the last time; I'm not especially interested in your age, whatever it is.)

For example; a well-known zine editor produces a regular zine that prints both slash and slish. In order that nobody will be offended by reading the slash stories, she marks them. She doesn't mark the slish stories, no matter who may be offended by them.

There's another zine editor, who also produces an irregular zine, who prints slish and slash, who when I wrote praising the stories in one issue but complaining that they were all slish, wrote back, saying that they were slish because basically that's what *********** ****** is for isn't it?

And another editor who I had always thought produced an exclusively-slish zine, who said that she wouldn't actually object to printing a slash story if only one of sufficient quality could be sent her. I won't name the zine, but honest to Goddess, I've never read more mediocre "adult" stories, slish or slash, outside *-***-*****.

Oh yes, and the editor of that zine, who practically fell over herself grovelling for ever having produced these slash stories.

Oh yes, and the flyer for an upcoming zine that said that no slash or "adult" stories would be accepted, and one of the blurbs said; "A piloting lesson aboard the newly-acquired DSV for X brings about interesting and, er, intimate consequences for X and Y, and strengthens Y's resolve with Y's very personal plans for Z." Now I have no idea what this story is actually about, and I'm sure it's actually pure as the driven, but... as it happens, X and Z are male, Y is female. If they were all male, would the story still have been printed? Maybe. Would the blurb have been written in exactly that manner for a slash story, rather than a slish?

A slash story becomes unprintable in any but over-18 zines if it actually states that the two (or three or four or seven) participants are lovers. A slish story only becomes unprintable if it goes into actual detail about the sex that is taking place. Now there are variations and editors differ, but search your own soul and think about it.

I know of one writer at least who writes two versions; one in which it's clear that sex is taking place, one in which it's not. I can't do it, but I can't blame her; with most zine editors with their heads trapped, what else can you do?

I resent it. I resent the fact that when I write an adventure-packed fifth-season story it has to get printed in a slash, not a mainstream zine, because incidentally I make it clear in the story that Soolin and Dayna were lovers, that Avon and Vila were lovers, and that Jenna and her engineer, a woman called Dee, are lovers. I wonder if it would have been segregated if I had suggested that Soolin and Tarrant were lovers, Avon and Vila were celibate, and made Jenna's engineer-a man? If, in short, I had made it an action-packed adventure with a slish background, instead of a slash background?

God, I resent it. There are moments when I come to hating all the closed minds and closed zines. Because for so long as all slash is treated as though it were pornographic, and printed only in over-18 zines, few writers will have reason to write stories which simply take the gay element for granted; I can only, off-hand, think of three, and they're all gay. Oh yes, and the authors of Log of the Hellhound, but even they didn't have the courage of their convictions to insist the story in which Avon picks up a boy to have sex with be printed along with the other Hellhound stories. And the authors of Last Stand at the Edge of the World, who have split their wonderful series up into two halves; one in which Avon and Vila are never actually stated to be lovers; and one in which they are explicitly stated to be lovers and they have graphically-detailed sex all over the place.

This split does nobody any good. Why is it necessary? Why must stories in which it is made clear that two people of the same sex are lovers be printed only in over-18 zines? What are you. all afraid of? I AM ANGRY. "Touched" was started out of anger and it is ending in anger.

Media fandom obviously doesn't need Section 28; it's policing itself rather nicely. One zine probably can't do anything to stem the tide; I shouldn't feel guilty about giving up.

But I am giving up.

I am bored of realising every three months that it's time a new issue of "touched" came out. I am tired of typing it up. I am thoroughly exhausted of all the incredible complications of untangling finances (who ordered eight back issues and eight issues ahead, who wants four issues ahead starting issue 10, who is writing to know if I have died or the Post Office lost their letter - )

Maybe in a year or so I'll do another zine. But never, never again a quarterly. You need to be seventeen, as well as angry, to start something like that.

See reactions and reviews for Customs.

[All Alone]: My favorite Jane Carnell story is a B7 in her own zine "The Unique Touched" [sic] called, I think, _All Alone_. It is a beautifully sad Vila story (and I don't really care for Vila, and it still grabbed me. In it, Vila thinks of himself as property, until *Avon* finally shakes him out of it. Very good! [3]

[A Different Path]: In Bryn Lantry's 'A Different Path', Cally and Jenna escape in the same pod after defeating the Andromedans, then spend some time equivocating about 'the awkward tenacious love they'd worked on in such unpropitious circumstances', before Cally's telepathy overcomes Jenna's tendency to ignore her own feelings and they embark on a post-Robin Hood mission of 'stealing from the rich and giving (or at least selling at not too outrageous a profit) to the poor'. [4]