"touched" was a slash, gen and femslash multifandom letterzine published in the U.K.

detail of the logo on many of the front covers

It was more overtly political and lesbian than usual for zines of that era. The publication was also known for being copylefted (free to copy) at a time when zine editors frequently inveighed against zine piracy. There was no charge for the first three issues; in the editorial for issue #3, it was requested that folks pay some "filthy lucre" for future issues.

"touched" has a sister zine which ran for two issues called The Unique Touch.

From editorial in The Unique Touch #2: "...[the quotes around the title] were the result of RiK getting over-zealous when he designed the logo, but I liked them and they stayed)..."

Thank you for "Touched" existing. I read everything in (almost) one sitting, (Just after reading the E-man-uelles zines actually) and am utterly delighted, shaken by hysterical fits of laughter and generally In a state of mild euphoria.

I love the zany humour: Fairy tales revisited, E'S Revenge, Unromantlc Affair <<Walt till you see the sequel! hJc>>, Stories to Annoy... all that and more got me rolling In the aisles! (a were-duvet is a killer when you are in the right mood, "Blake has no guts... thanks to Avon" still gets me chuckling, A Fate Worse Than Death (Ann & Jane) is a cynical Jewel according to my heart). I like the books and fanzine reviews. Most sf authors mentioned (there and elsewhere) I read and enjoy (although, where does one get Southern Lights and Southern 7?) <<Ooops. . . Sorry! hJc>> I'm truly impressed by Bryn Lantry's style (of course, being myself B/A oriented might bias my judgement. But Bryn (read "you" if you are Bryn), also uses imaged writing to good effect.) In fact, the general quality of what I read is pure satisfaction - all authors included: I was going to write a list of my favourite stories, and realized I was listing every one. However, despite promises, the fiction seems sometimes to deal more with engorged shafts and assimilated that with 23rd century <<B7 is set in the 30th. hJc>> reactions, and non-participating crew-members feelings about gay life and longings. I'd rather stories did not end when the two new lovers hop into bed together for the first time: in-depth crew reactions stories would be welcome. In that vein: "In Porphyry" (Bryn Lantry) deals with the general climate and Blake's motivation most convincingly, or "Changing" (Jane Carnall) where Blake's prejudice turns into shared complicity with Dee and Jenna. Am I being selectively blind, or is it really a tendency, that stories involving Blake tend to be more "outside" oriented, whereas Avon/Vila stories tend to deal mostly with the both of the:;" This could be because Avon and Vila are mostly interested in their own survival, whereas Blake has by nature, broader aims?

Practically speaking, one last thing. Jane? <<Yes?>> How about a table of contents? Or is one condemned to go through everything, systematically, to find what one is looking for? <<What, you mean not everyone has an eidetic memory? I'll think about it. hJc>> [1]

My first fandom was Blake's 7. Yes, there wasn't a lot of f/f in B7, but it wasn't non-existent. You had to look in the right places, mostly photocopied and stapled together zines with a lot of Avon/Vila, but it was there. Some zine publishers were actively hostile to it, but others were quite political, and it got through. [2]

This one is actually both B7 and Star Trek (TOS only, I think), and is the very firmly (and usually explicitly) slash, but also quite biased towards A/V on the B7 side, though not exclusively - and it has the odd femslash piece, too! They are quite basic issues, but the stories I really enjoy. It also has letters and surveys, which I find interesting as documents of the time.[3] 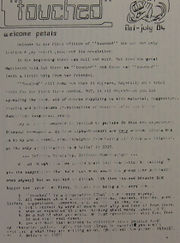 From the editorial of the first issue:

welcome petals. Welcome to our first edition of 'touched' the one and only lesbian and gay sci-fi group and its newsletter.. In the beginning there was null and void. But then the great Matriarch would let there be 'touched' and there was 'touched (with a little help from her friends).

"Touched' will come out when it appears, hopefully on a trial basis for the first three months. BUT, it all depends on you lot spreading the word, and of course supplying us with material, suggestions, insults and criticisms (constructive of course), we're not in the demolition business, dear.

Any alien or humanoid is invited to partake in this new experience. Bisexual hermaphrodites from Alpha-Centuri are verywelcome (Fiona McA is kinky about them), even straights from boring old Terra are eligible, as the only qualification is a belief in I.D.I.C..

The first issue has some suggestions:

1. "Touched" is a cooperative. (That's the theory anyway.)
2. "All members should contribute articles, reviews, stories, poems, letters, suggestions, comments, etc, as often as they can.
3. Let's recruit by word of mouth initially and take it from there.
4. When we expand we'll start thinking about money. [undecipherable three characters]
5. Be proud of what you write. We hope contributors will feel free to use their real names.
6. You are more than welcome to criticise other people's work eg characterisation, style, etc, please be careful you aren't critisising what they are writing about. (No closet Homophobes, PLEASE!)
7. Believe in I.D.I.C. 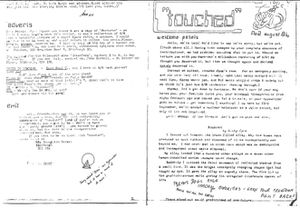 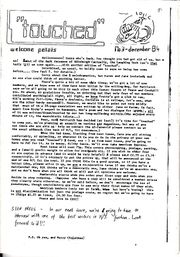 It mentions that issue #4 will have an interview with "one of the best writers in K/S fandom."

Now the bad news. Starting from the next issue... you're going to have to PAY for it. As in money. Filthy lucre. We'll even take American Express. Next issue will cost 75p. This covers photocopying, postage, packing and a (small) profit margin to allow for overhead, etc. If you wish to offer four or six copies in advance (and it would be very helpful)... If it's necessary to put the prices up, that will announced at the end of one N/L for the next. If you think this is a good system, or if you have a better idea, please write to us, we are a co-operative (even if Ann thinks we're a matriarchal one, RIK thinks we're a democratic one, Jane thinks we're an anarchic one, and we don't know what you think at all) and all opinions are welcome. 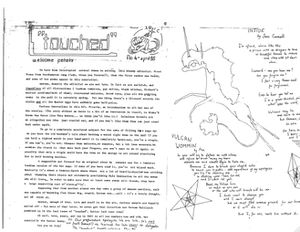 [Changing]: While all of these stories have their parallels in m/m slash, the remaining seven stories more closely resemble the sub-genre of B7 gen stories that focuses on developments in the emotional relationships between the male characters - for example, Susan Lovett's 'The Road to Hell' (A-B) or Lillian Shepherd's 'The Haunting of Haderon' (A-V). Jane Carnall's 'Changing' and its sequel 'Revenge for What?' establish the basic paradigm. The first story introduces Jenna and her lover Dee Tarrant, Del Tarrant's engineer twin, and shows them sorting out Blake's homophobia.

In most stories, I'd find it impossible to guess whether the writers would categorize their characters' overall sexual preference as lesbian, bisexual or irrelevant. Only one story - perhaps not coincidentally the first B7 f/f, jane Carnall's 'Changing' - explicitly raises the issue of sexual preference, with Blake spitting, 'I'm not a perfert' when Jenna says she wondered whether he and Avon were lovers; then struggling to come to terms with the fact that Jenna is now in love with Dee, not with him; and finally 'changing his metal [mental; the grammar is reproduced as it was in Nova's essay] images of Jenna and Dee from potentially desirable women into neuter asexuals, part maternal, part brotherly'. [5]

"touched" 5 was published in July 1985 and contains 25 pages. Beginning with #5 through #11, all covers are identical, except for the number and date. This cover was designed by Pearl Hodgson. 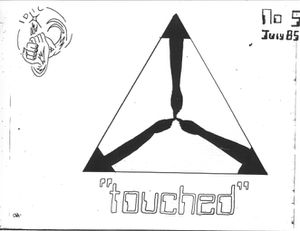 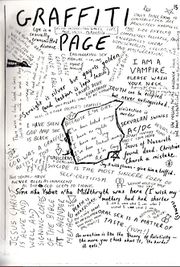 We have observed, with a certain natural pride, that "touched" has been improving steadily since its very first issue. Issue One, all those months ago, consisted of 12 pages and four contributors, rather badly typed and smudgy. Issue Two, 16 pages and five contributors. Issue 3, while only with only four contributors, had 28 pages and looked far more professional. It was also the first issue that was to reach overseas members. Issue 4, we believed had touched (no pun intended, honest!) the peak. Seven contributors, skillfully written stories, touching poetry, and delicate artwork. We were wrong. Issue 5, the issue you hold in your hands, is the best yet. Seven stories by six writers, each with markedly different ways of looking at the Universe, all with an unshakable belief in the philosophy of IDIC. 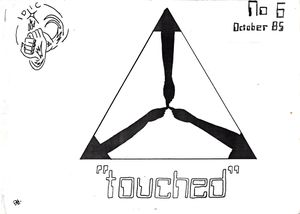 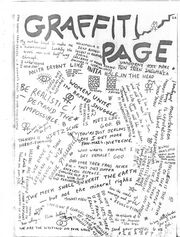 from issue #6, the graffiti page

[Silent Night Holy (?) Night]: In Jane Carnall's 'Silent Night Holy (?) Night', Vila organizes a Christmas party for the S4 crew, where Soolin rescues Dayna from Tarrant's attempts to nudge her under the mistletoe and the two women walk out, 'linked together', while Avon editorializes, 'Tarrant is the kind of man who can't bear to think that every woman within eyeshot isn't sexually attracted to him. The presence of two women who are quite happy with each other is... upsetting'. [5] 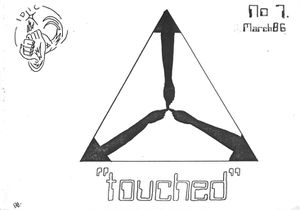 See reactions and reviews for In Porphyry. 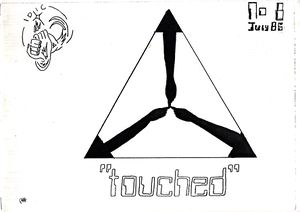 [Kindred Souls]: On a different tangent, Aislinn's 'Kindred Souls' brings Avon and Cally together after Star One, making love as a way of grieving for their lost lovers Blake and Jenna, in a story that uses the same pairings as Randell to reverse effect, positioning heterosexuality as consolation for the loss of the central and crucial m/m and f/f relationships. [5]

"touched" 9 was published in November/December 1986 and contains 22 pages. 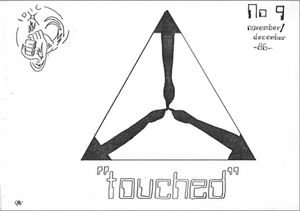 This issue contains largely Blake's 7 material, although with some multi-fandom miscellaneous content.

Note: A/B Slash: A Chronological Listing by Nova list an A/B fic "Julie Kramer, ‘In the Meantime.’" as appearing in this zine, but this story was actually published in Issue 4. 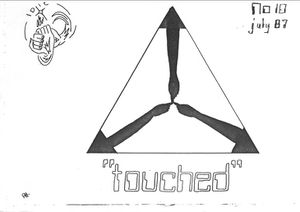 "touched" 11 was published in November 1987 and contains 42 pages. The cover is identical to #5, except for the number and date. 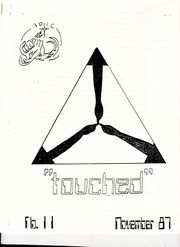 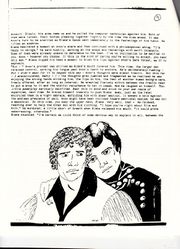