Forbidden Zone is an explicit slash and het Blake's 7 anthology. 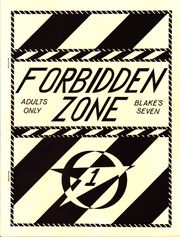 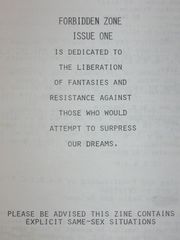 At the time the zine was published, many fans objected to the existence of slash fanfiction. This page combines the typical age statement warning along with a dedication: "Forbidden Zone Issue One is dedicated to the liberation of fantasies and resistance to those who would suppress our dreams." The themes of liberation and resistance were core elements of the Blake's 7 canon. The main character of Blake' had been falsely accused of child molestation and imprisoned in an effort to quell the resistance. Note the use of initials and pseudonyms in the table of contents.

Forbidden Zone 1 contains 67 pages. All art is by Tristine. Layout by Regis and Delaven

[zine]: Or - Jarvik, Jarvik, Jarvik, as I like to call it. I bought this one because it was very cheap and I was already buying Forbidden Zone 2... Wouldn't it be nice to have a set? I thought to myself. The answer is - not that nice. Although I would have had to restrain myself from not seeking out Jarvik related stuff. Because I think Jarvik is hilarious.

What I will say is that the presentation of this zine is very nice - more so in the second one. Hand-drawn frontispieces and nice illustrations (again, more in the second one, when the artist seems to be picking up confidence). It's nice to see care going into the production/art being incorporated. Also - the only possible date that we have for either Forbidden Zone is a guess at 1985 for the second one. That means 'Forbidden Zone' is incredibly old. Not my copy, though, which I think is a photocopy.

Delaven, "Broken Trust, Broken Promises" (Ta/V, with implied previous Ta/Jarvik) V/T set before Warlord and with a flashback to a moment in series 3 where Tarrant gets drunk because he's sad about his brother's death and mistakes Vila for Jarvik (as you do). In another story this could have gone very wrong for V, but here it doesn't. Back in series 4 - V has shut himself away because of Orbit (a frequent theme of A/V but not so much of other pairings) and T is going off to, what the reader knows, will be a meeting with Zeeona. Therefore, there's a nice understated ending of our heroes failing to connect.

M.A.R.E.C., "Outside Influences" (Ta/Jarvik, Ta/Tr, Tr/Kiera, Ta/Kiera) Ok, so - this fic. Tarrant gets a few good moments, but is largely a brainless boytoy. Jarvik is too nice. Tarrant is OK with Travis raping him, even though it's a betrayal of Jarvik. The daterapey stuff with Kiera is also weird - and it's kind of weird that the fic posits that Tarrant needs to be rescued from this rapey woman and her friends, whereas Travis sort of gets excused because he and Jarvik are mates. And because he's a man.

A very strange fic (or rather - not strange, it fits into a fairly established B7-genre but I don't understand what it is trying to say) in which Avon is being treated for radiation poisoning, I think, by Cally and this allows him to access a memory of a time he was raped by a woman! :/ For ages, I wondered if it was Cally... the fic does not tell me. Obviously I do not recommend. [1]

Tarrant appears to have been a favorite with the Scorpio Club. He's featured in two of the three stories in this zine.

"Broken Trust, Broken Promises" is a bittersweet V/T by Delaven. After Deeta' s death Vila finds Tarrant close to comatose from a combination of alcohol and drugs. He attempts to help the pilot work through his overdose and his grief. When the comfort that Tarrant seeks turns out to be of a sexual nature, Vila obliges and finds that "behind the self-assured facade," Tarrant is a "lost little boy." But their relationship takes a turn for the worse after Malodaar. Hurt by Avon's actions and needing to keep all Alphas at least temporarily at bay, Vila inadvertently sends Tarrant into Zeeona's waiting arms.

"Outside Influence" by MAREC is a somewhat darker story. Involved in a relationship with Jarvik, Tarrant finds he is both attracted to and repulsed by Jarvik's friend, Travis. Travis manages to seduce him, which causes a rift between Tarrant and Jarvik. When Tarrant drinks to drown his sorrows and almost gets kidnapped by a group of people out to do him harm, Jarvik and Travis come to his rescue.

Done before computers and laser printers were common, the zine is still nicely put together and contains a proportionately large amount of art and illos of very high quality. [2] 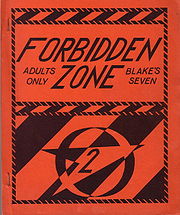 This issue is exclusively Blake/Avon. All art is by Tristine, except for one image by Deb Walsh.

This issue of Forbidden Zone is dedicated to exploring the aspects of the Blake/Avon relationship as seen by our various authors, artists, and poets. When we started this issue, we had no idea that all our submissions would deal with the B/A relationship, but even if this is not the most "ideal" coupling in your mind, we think the zine makes for a "good read."

We are now in the planning stages of Forbidden Zone 3, and we hope to expand our format to include stories from universes other than Blake's 7. We would like to see FZ become a multi-media, adult publication. This does not mean that we are abandoning the B7 universe entirely -- just that with all the wonderful stories floating around in fandom these days, we would like to present something for B7 fans whose tastes have diversified into other universes. As a close friend once told me, "You've got to grow, damn it."

[The Chosen]: (Sex? Yes) Blake gets vamped on a planet and Avon has to become his doner (the same thing happens to Servalan and Travis), cue angst and telepathic sex and some adorable rolling around in straw. Very well characterised, great dialogue and lots of fun. What separates this from others in its genre is that Avon though not gay for Blake initially is shown to be incredibly protective of him/focussed on him so the move into the relationship (though driven by sexy vampirism) makes a lot sense. [3]

[zine]: There's a quotation on Fanlore (I put it there yesterday) from the editorial at the beginning of this zine that says "When we started this issue, we had no idea that all our submissions would deal with the B/A relationship, but even if this is not the most "ideal" coupling in your mind we think the zine makes for a "good read" I'm afraid this is wishful thinking. If you don't like B/A, I think you might enjoy the final story... a bit. But I think you'd do better to go somewhere else.

However... if you do like B/A... That is a different matter. There are only three stories, and one of them is very short. Fortunately it's the one that's on the internet already and it's the worst one.

Calico, "Between the Pages of a Look" (B/A) Calico wrote the exceptionally divine 'Souls of Discretion'. So I am always on the look out for other Calico fics, none of which have quite measured up. But... if Hermit is right and 'Forbidden Zone' 2 was published in 1985, then 'Souls of Discretion' was written a mighty sixteen years after 'Between the Pages of a Look'. No wonder SoD is better.

All of this is selling BtPoaL short - actually, I like it a lot. Like - more than many other things. It's a fake relationship/negotiations with a powerful homosexual leader story (possibly the first example, given it's date, of what would become a major trope within this pairing). B is a bit wimpy regarding how little he wants to sleep with the leader in question, but also nicely irritable - it's very good characterisation in general of all the leads, as there are bits around the main story with Vila and Cally getting some good scenes as well.

It is slow. I knew right from the moment that Avon said 'the guys we're negotiating with will ask you for something you cannot give up' that they'd ask him for Avon - but it took 50 pages or whatever of B and A being very obvious about how they felt about each other for our negotiating guy to come to the same conclusion.

Similarly, in my most recent fic, which it seems gauche to mention but which I will mention as it is, I think, the most recent example of this genre, they have sex after ten minutes in the same bed... Here, we wait three nights and nothing very much changes either in the world outside the bedroom (negotiations are still blocked as B still refuses to sleep with the guy) or in it. But... everything is relatively pleasant and it seems churlish to get upset. The sex is nice - a bit purple, but not at all distractingly so, except for the bit where Blake is described as 'the curly haired dynamo'. But again - churlish. Basically, I like it.

The only thing I actively don't like is that (in the final scenes) Avon never says 'I didn't have to sleep with that guy'. Blake keeps apologising for Avon being put in that position (even though it was 100% Avon's choice) and A didn't even have to go through with it and knows it. Never mind.

London Bates, "Knight Maneuvers" (B/A) Ah, London Bates. One of the few writers who fancies Blake as much as I think right. This fic has a very flimsy premise that I can barely explain, and involves Blake being able to stay erect through three+ ejaculations. It is actually quite adorable, although improbable.

Delaven and K.N.S., "The Chosen" (B/A, Tr/Se) This fic is so good! Again - I think it may be the first example of a relatively popular genre i.e. Blake is a vampire. The dialogue is really good for everyone, and there are lots of bits of the rest of the Liberator crew fighting pursuit ships to entertain you if you want more from your fic that Blake wrestling with the fact that he's becoming a vampire and kissing Avon. The Travis/Servalan relationship is perhaps a bit improbable (I don't ship it, you see), but I like the way it works to provide plot points around the B/A stuff. Very nicely fitted together.

Regarding the B/A stuff - it's not sexual until the first bite, and then of course vampires [equals] sex (and telepathy). Now, I've objected to this vampirism-into-relationship premise before, but I actually really like it here because before it even happens we have Avon being exceptionally protective a la Exbar, and the change into sexual vampire dependance is properly couched in both of them being surprised/upset (Blake was in a relationship with Jenna, which A now knows about due to vampire-telepathy) and then enjoying it physically and also because it allows them both to stop being so awful - and then very worried about what will happen when Blake is cured. The (very effective) ending is downbeat, precisely for this reason.

But before that we have a lovely bit where they're rolling around on the floor, play-fighting and kissing (in a non-OC way, I promise), and then Travis walks in to arrest them. Aha. I love it.

It is a shame this author either didn't write anything else, or wrote it under a different name so I can't track who I'm looking out for. [4]

Thank you for the suggestion to pick up Forbidden Zone 2.1 got a copy at MediaWest and enjoyed it very much! [5]