Quicksilver Rising is a slash and het Blake's 7 anthology.

Quicksilver Rising 1 was published in 1984 contains 70 pages. Denise Walton is the over artist. It contains both slash and het (mainly het). 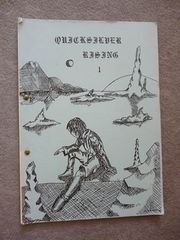 Vilaworld adult zine (over 18 age statement required) £1.50 inc. p &p, 68 pages, A4 duplicated, nicely presented with drawing on cover. Cheap but adequate covers and binding. 11 stories featuring Vila specifically but, I emphasize, enjoyable reading even for those who aren't Vila fanatics. Vila meets a couple of old flames, suffers a few injuries and dramatic experiences and, in a particularly moving tale, remembers life in prison. Two very atmospheric tales fantasise, two of the shorties are hilarious and two of the longer stories light-hearted and very amusing. [1] 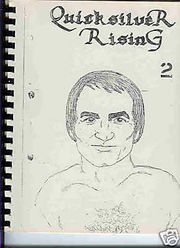 Quicksilver Rising 2 was published in 1984 and 68 pages long. ER is the cover artist.

Quicksilver Rising 3 was published in 1985 and contains 58 pages. Vikki Weidner is the cover artist. 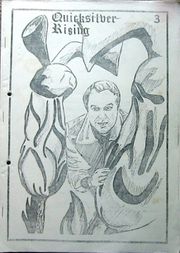 Quicksilver Rising 4 was published in August 1986 and contains 56 pages.

This is an adult zine containing six stories, straight and slash though none of them is notably explicit (probably rates around 3 on a 1-10 scale where 1 equals very mild). They focus, as one would expect in a Vila club zine, on Vila. "Doolie" by Louisa Dunne is a fairly mundane old acquaintance-from-the -past story, and the basic situation takes a bit of believing. "Matriarch" by Cavea Lector also covers familiar ground, with Avon and Vila attending Cally on a quest to a female-dominated society; by the way Avon, not Vila, is the one who gets Cally. "The Matchmaker's Dilemma" by Ros Williams is a witty and light-hearted piece about Vila's match-making attempts among the crew. I particularly liked Avon's line to a predatory Cally, "I am normal. I and my parameters". "Untitled story" by Jane Carnall is rather darker in tone, though far from explicit, having Tarrant as a yob abusing Vila while Avon is apparently dead. It's not the most original on this theme that I've ever read, and I wish Vila wasn't quite so abject, but it is nevertheless an involving and enjoyable story (unless of course you're a Tarrant fan). "Broken Fantasy" by Erica Leonard is a short story telling how Avon's desire for Vila has results rather different than those he expected. Quite good. The last story "Pillow talk" by Henrietta Street is a very short comic one which has also been published in Southern Lights. [2]