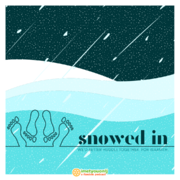 Cave Stories are often referred to by the trope name 'Snowed In' by fans on Tumblr; illustrated by I Met You On LJ for Fic Trope Friday.

The cave story originated with Kirk/Spock in conjunction with the Pon Farr story, constituting fandom's oldest known plot device for getting the couple in question to get it on. In the cave story, Kirk and Spock are stranded on a remote planet and forced to seek shelter in a cave. Given the combination of isolation, mutual dependence, and enforced closeness, and well, one thing leads to another.

Other fandoms picked up the trope, varying it as needed (a blizzard or other big storm, a remote planet, a deserted island). The 101 Ways To End Up In A Canadian Shack challenge of 2001 was a variation on the cave idea, isolating characters in a remote Canadian shack.

Beauty and the Beast (TV) fandom extensively used the trope, What Happened in the Cave.

A Fan's Description of Their Appeal

One of the reasons I'm so attracted to fan fiction is partly due to the frequency in which caves appear. When I've gone camping, I've always pretended that the canvas dome was a cave. As a small girl, I remember peddling my bike for hours just to explore a likely looking rockface for that most mystical of places. All my life I've been looking for a cave, and the only ones I've ever found have been in the lovingly crafted stories of fandom.

Most of my heroes have had adventures in the shadowy recesses of rock hewn rooms—often while recovering from various forms of injury, punishment or privation. A cave has come to represent many things to me: a place of safety,a place to gather strength, a place of rest and recovery. But most importantly, caves have come to symbolize the best of what I look for in series television and fan fiction—an almost magical transformation can happen to my beloved characters once in the confines of a cave. Often, my heroes will let down their carefully cultivated walls and transform into the characters I truly desire to view and read about. An atmosphere of warmth and exchange can be more believably established. I want my men to care...and a cave is one damn fine way to make this happen.

A quick run-down of my some heroes includes: Bodie and Doyle, Starsky & Hutch, Kirk and Spock, the Cartwrights of Bonanza fame, the Bolt Brothers from Here Comes the Brides and last, but certainly not least, themes of Blake's 7. It's an eclectic list, but I'd be surprised if nearly everyone reading this didn't have some of these characters on their list of heroes, too. All of these men, either in the aired series or in fan fiction, have had journeys of emotional transformation that happened in the cool confines of caves. [This fan reviews the story Stranded by Matilda Willard, see that page] [1]