Holidayfic is holiday-themed fanfic. Most often it is written for/about religious holidays; the most common type is Christmas fic, though in 2005 hyperfocused orchestrated a Ten Plagues challenge which sparked a surge in Passover-themed fic across many fandoms. Holidayfic is also written for secular and national holidays such as Veteran's Day or Valentine's Day. White Day stories are common in anime/manga fandoms.

Holidayfic is very popular in Harry Potter fandom, perhaps due to the fact that Halloween and Christmas are lavishly celebrated in the canon.

Commonly the characters observe the holiday in some way in holidayfic -- the characters celebrate Christmas or Passover, go on Valentine's Day dates, etc -- though the story can also be thematically related to the holiday. For example in military fandoms, fanfic dealing with Veteran's issues is then posted on the occasion of Veteran's Day and thus tied to that holiday by the author.

However much of the fanfic posted for holiday-centric gift exchanges, such as Secret Santas, is not holidayfic in this themed sense.

Sometimes holidayfic can cause controversy, for example when an author writes Christmas fic for Jewish characters but doesn't acknowledge that the characters are not Christian. (See Judaism and Fandom for more on this.)

See also Purimgifts - though there's no requirement for stories or art to be Purim-themed, they often wind up that way. Also see Days of Awesome and Eid Fic.

Holidays Only Unique to Source Text

Religious Holiday Assumptions and the Future

Jim and Blair don santa hats, art by Ankaree for a story in My Mongoose 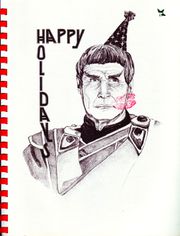 Sarek ringing in a new stardate from the zine, Happy Holidays

Banner for The Great Agreste Tree Heist. Art and fic by shadowmayura.