The Hols of CI5 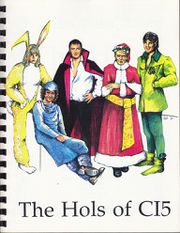 The Hols of CI5 was published in 1991 and is 116 pages long. It is a gen and slash Professionals anthology of holiday fic.

Some stories were published in Other Times and Places I and III and Chalk and Cheese #4 and #6.

It is part of a series of themed zines:

From a 1992 submission request in Zine Scene:

HOLS 2 is open for submissions. Deadline is February 1, 1992. Is there a Bodie-and- Doyle-celebrate-Yom-Kippur story hiding in your closet? Do you have Cowley-greets-the-New-Year story cowering in your glove compartment? Can there be a Murphy-brings-his-sweetheart (male, female or both)- a-single-red-rose-and-some-chocolates living in your refrigerator? No? Well, why the heck not? Round up those CI5-fellers-celebrate-a-holiday stories and send 'em in! (For those in the dark, 'hols' is how the Brits abbreviate 'holidays.') And, yes, I am foolish enough to do it again!

Thank you for The Hols of CIS. Lovely cover. Oh, Father Cowley! Didn't Bodie comment in one of the episodes that Cowley couldn't look benevolent if he tried? That's sort of the effect here; he's trying, but there's still that get-on-your- bike-laddie look to him.

Overall, I thought the stories were rather light—like bubblegum for the mind. Stew's story was fun, as was Terence's.

Daphne Ann Hamilton's St. George and his knights was superb.

"Beltaine" by Susan Douglass I thought to be one of her better efforts (and Pat Cash's manga-esque drawing was scrumptious).

"Delayed Justice" by Sue Wells made a wonderful sequel to "Seeking Justice" from C&C6.

And I found a certain perverse pleasure in Santa's sleigh being equipped with a Vulcan mini-gun in Linda Terrell's "Best Seat in the House." But then, everything in the zine was readable and enjoyable. [1]

The cover is a giggle. I mean, St. Swithin's Day?! I knew Kate Nuernberg was talented at word-play, but to be able to perpetrate a pun without words? I'm in awe. (-That's our Kate! And for those of you still perplexed, Martin played Dr. Huw Evans in "Doctor in the House," who practiced his trade at St. Swithin's Hospital. Hence, Doyle celebrates St. Swithin's Day by donning doctor gear.-)

I really got a kick out of "Fish Out of Water." I can just see Bodie first driving the instructors nuts asking disingenuous questions, then using The Book to plague anyone else within reach. I'm afraid I may have disturbed the neighbors, I was laughing so hard reading the story.

The Ellis Ward story was, as always, a delight. There was enough angst to keep it from being too unadulteratedly sweet and I loved the little funny bits scattered here and there. [2]

The Hols of CI5 was great, and covered some holidays I've never heard of. But it was terrific. I loved the cover picture and the illustrations which appeared on pages 6, 27, 38 and 117.

I particularly enjoyed "Death By Delight" and "Chocolate Bandit." "You and Me, Bodie" was also very good. Truth to be told, every story was great. All I can say is, encore, encore![3]

Sparkling cover on Hols—even my husband commented on it being 'so colorful.' Aren't you glad Ghod gave us color xeroxes?

Karen Eaton's cartoons are priceless as ever. I especially liked the Passover one: "Hey, lady, yer bread's flat."

"Death By Delight"—that does it! Now I've got to work 'straddling' into a story!

The "Easter Buns" cartoon on page 10 may end up on our lounge bulletin board at work. "Chocolate Bandit"—what a curious way to give chocolates. Don't know as I'd particularly care to get my chocolate fix that way, but then, I am on a diet... I liked the 'soft' quality here. Warm snuzzies of affection and loyalty. And hazelnuts...now that's tempting. "Fish Out of Water"-shouldn't this have been titled "By the Book"? I've never had any trouble eating anything that stared at me—but certainly not while it's still gulping for air! Eeeeooo—animal rights people will getcha for that one! Doyle in a top-knot—a curly top-knot. Well, now, that's worth a story any day.

"You and Me, Bodie" — this is the second story featuring a 'domesticated' Bodie. Am I seeing a new trend? (I don't let my husband do my laundry, either!)

"Dragon Slayers, Ltd."— well, a three-headed dragon? What would the Welsh say? Unpronounceable, I'm sure. And that illo! A CIS coat of arms—when will we be able to get the t-shirt?

"Beltaine"—the sentence structure of this sounded as though it wanted to be a tone poem. And that illo on page 61—yum! H*0*T!

"Snake in the Garden"—hey, I have a four leaf clover and it didn't get me Bodie! Drat. And marinating that poor snake—you're really are going to on the animal rights activists' list of People Vegetarians Should Avoid. (Myself, I'm a belligerent omnivore—I eat vegetarians.) "Heatwave"—after a few pages of this, I wanted to 1) slap Bodie and 2) take a shower.

Actually, I've always rather seen Doyle as the carper of that pair. But sitting in a hot car on a hot day... Ain't secret-type agenting grand? (Corollary—walking a beat in minus 20 degrees [me dad was a beat copper].) Thanks for giving Bodie the swiss role. But...why didn't it melt? "Lions and Tigers and Mice, Oh, My"—I cheated on this one—got to read it before Debbie sent it out. Hee, hee! Always a giggle to meet DM meeting B&D. Now, all that's left is for Napoleon and Illya to meet DM (or Riggs and Murtoch). How about Dominion Day, Debbie? (July I in Canada for any isolationist cretins.)

"In For a Penny..."—B&D being silly, as if they need an excuse. Nice touch letting them be 'relaxed' and joining the mundanes. Odd, I can recall, just vaguely, going to huge bonfires when I was little. I can even recall seeing a 'dummy' being put into the fire (that was the plot in an old murder mystery movie, too—got rid of the evidence by putting the body onto a Guy Fawke's Day bonfire). But I'm sure the bonfires were for July 4.

"Burns, Baby, Burns"~haggis flambe. That's it, I'm outta here. And I thought 'regimental' meant underdrawers so's you shouldn't surprise the Queen while doing a crisp about-face On Parade... (Me sister was bitten by bagpipes.)[4]

I very much enjoyed all of the stories in The Hols of CIS. By the way, I love the title! Also thought the artwork was great. I guess my first-reading favorite is "Chocolate Bandit," but then, I find that Ellis Ward's stories are almost always my favorite in a zinc. Either she is a fantastic writer (which I think she is) or her stories manage to touch me in just the right way. Or probably some of both. "I liked "Beltaine" a whole lot, too. "And "In For a Penny..."—it was so good to see our boys having fun with the kids and being able to relax for a change. I also enjoyed reading the complete story "Heatwave" by Janet Walker, having savored the excerpt she had in Kate's Cold Ftsh and Stale Chips.

By all means—more! There are so many good writers out there, and the holiday theme is such a great one. [5]

All the stories in were good, but my favorites were "Heatwave" (Bodie is such a kid; sulking because he didn't get his treat. I love it!) and "Best Seat in the House" really. [6]

The Hols of CI5 turned out great—not a clinker in the bunch.

I love the Karen Eaton cartoons, particularly Bodie drawing a bead on Rudolph's nose! He looks cute in a bunny suit as well.

Most of the stories had very memorable lines, interesting plots, good characterization or a combination of all three.

"Chocolate Bandit" was my favorite story (by a short nose). It was funny, sexy and very much in character, at least as I interpret the boys. The bit about the hazelnuts cracked me up! I particularly liked the sly, sneaky way that Cowley got the two of them to go on record concerning their relationship.

"You and Me, Bodie" was also very nice. I'm a sucker for well done romance, especially when it's accompanied by great dialogue.

'To Sir, With Love" was a nice blend of pathos and humour. It was a nice tribute to Cowley.

Debra Hicks did her usual hilarious job on "Lions and Tigers and Mice, Oh, My!" 'A 5'4" hamster is not a pretty sight,' indeed! I loved the bit where Bodie is trying to catch an enlarging and shrinking Penfold in the miniature flying car.

"Best Seat in the House" was great. I loved having the two boys riding shotgun for St. Nick. The Eaton cartoon was the perfect accompaniment.

Other bits and pieces that were memorable were: the haggis flambe in "Bums, Baby, Bums"; Natasha Barry's comments on Doyle's arse in "Snake in the Garden"; the Yokahama Castle Hotel cotton kimono in "Fish Out of Water."

Sue Wells did a much better job with "Delayed Justice" than she did with the prequel- this installment tells you everything you need to know. I felt the earlier story was too dependent on the reader having seen the episode. [7]