Whatever You Do, Don't Press!

Whatever You Do, Don't Press! is the name of Mysti Frank's first zine publishing business.

"Whatever You Do, Don't Press!" began in the pre-internet era.

This zine publisher became Agent With Style. It was a slow morph, reflected by website titles, changes in flyers, and who the checks were made out to, but in late 1999/very early 2000.

Checks were first to be made out to "Whatever You Do, Don't Press," then "Mystery Frank," then in October 1998 "Agent With Style" (though the press still had its original name).

According to its Facebook page, Frank considers "Whatever You do, Don't Press!" to be the same publishing company as Agent With Style, stating that Agent With Style "began in 1986." [1] This is a bit perplexing as the earliest known zine, Chalk and Cheese, was first published in 1988. 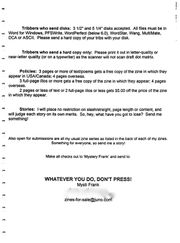 a 1997 flyer regarding submission formatting

In 1998, it had a functioning website (agentwithstyle.com), and could take credit cards. "Lastly, my web page is finally up and running, so why not take a minute to go check it out? As soon as I have all the zines I'm currently carrying and agenting uploaded (along with their tables of content), this will be the best place to go find out if that zine you've been waiting for so long has actually made it to print yet. It's also a place to check to see what zines I have open for submission. And, while I know this is going to strike fear into the hearts of those of you who have access to one, I can now accept credit cards!. Visa Master Card, Discover, and any card with a Novus sign on it. Oooh. Scary, isn't it?" [2]