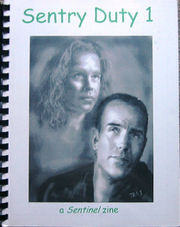 [Thanks for the Memories]: This one is a Blair-has-amnesia story, and opens in the middle of a dangerous situation, a lull in the action. This has all the yummy goodness one would expect from a Sheila Paulson story; angst, drama, villainy and smarm. Unfortunately I wasn't at all convinced by the female guest-character, muttering to myself all the way through "Why is she lying? She has to be lying." which was kinda distracting. Unless that was supposed to be one's reaction, I'm not sure. [1] 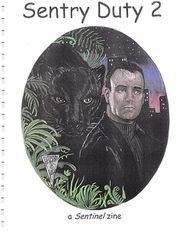 [Extraction]: The summary reads something like "Blair has a bad day; Jim has a worse one" and that is really all that is wise to say about the content of this story without spoiling it. There are some really good moments in this, how the whole thing starts off as if it's just going to be your run-of-the-mill owie/comfort story (poor Blair) and then... well, that would spoil it. Just go read it. The end makes me go "Awwww." [2]

[Seizure of the Senses]: I still pick up and read "older" zines, since I rarely read on line (too hard on the eyes). At MW this year, I picked up a copy of Sentry Duty 2. A story called "Seizure of the Senses" by "Tate" struck me as a particularly well crafted take on the idea of another Sentinel being "out there somewhere". Since the zine is dated 1998 I wasn't sure how to reach the author, but figured someone here might know. I enjoyed this one quite a bit! [3]

[One Hundred Minutes of Solitude]: I want to add that, in my opinion, the fact that this is labeled "gen" should not be a deterrent. This is a "Blair-Saves-His-Own-Ass" story and takes a mythological view into Blair's psyche. Jane wrote this before Blair was declared a Shaman by Incacha in Warriors, and yet here she has given him the shamanic role. Give it a try!! [4]

[One Hundred Minutes of Solitude]: In my opinion, this is the best Sentinel story in existence. I love it deeply, pathologically, and insanely. Every time I read a new TS story, no matter how good it is, about my third thought after I finish it (usually after "wow" and "what a great story") is "But 100 Minutes was better." Scary but true. :-) [5] 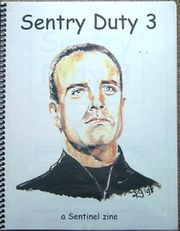 cover of issue #3, by Lyrade

Sentry Duty 3 was published in May 1999 and is 180 pages long. It has a cover by Lyrade. There is no interior art.

[The Dating Coach]: This story was tres amusing; an action-packed situation comedy with a delightful guest-character; your typical very nice absent-minded professor. "Tossing the illegible mess on his desk, Blair glanced up to discover Professor Titus Aronsen hovering diffidently in the doorway. "Have you got a minute, son?" Aronsen absent-mindedly called all the teaching fellows 'son'--unless, of course, they were female, then he called them 'my dear'. They joked that he did it because he couldn't be bothered to learn their names, although he never became confused enough to misgrade their papers." Blair is his own incorrigible self, and Jim does good too. [6] 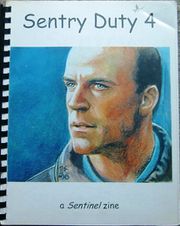 cover of issue #4, by Karen River

[Face in the Mirror]: I found this story on Guide Posts when I wandered over there and looked at their Alternative Universe listing. The story isn't on the author's page, just listed as having appeared in Sentry Duty #4. I'm glad I found it, because this story was lovely. Engrossing. I liked Sophie -- those people who go screaming and running away at OFCs, please don't run away from this story. She's not like that. As is not unexpected from this author, we get both insights, emotional minefields, banter, cool turns of phrase, and subtlety. I like the way things were led up to, rather than dumped on us. Definitely good story. I wish she'd write more gen. [7]

[Kushtaka]: Summary: During a camping trip, Jim decides to sleep in and Blair takes a canoe out to do some fishing At first he thinks he's snagged a big fish but, to his horror, a strange being that moves like a man but looks like an otter pulls him out of the boat. It's a Kushtaka, a mythical being from Tlingit folklore which tricks people into drowning and then either destroys their souls or turns them into more Kushtakas. It doesn't take long for Blair to realize he's transforming into an otter man.

Fortunately, Blair's anthropological knowledge comes in handy. He knows that the only person who can combat the beings is a shaman. He realizes that, fledgling though his powers are, he is the only hope to destroy the Kushtakas' powers and prevent them from continuing to hunt the living, perhaps including Jim.

Reccer's Notes: Jane wrote a couple of "Shaman Blair" stories years ago and this is one of them. Sadly, they were at her Geocities site, so you can only read them via the Way Back Machine. I like them because although Blair knows about shamanism intellectually, when push comes to shove something within him comes to the fore. Obviously, Incacha knew what he was talking about. Enjoy. [8] 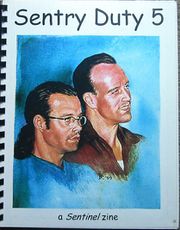 cover of issue #5, by Karen River

Sentry Duty 5 has a cover by Karen River. It was published in May 2000 and contains 205 pages. 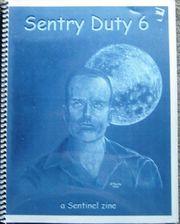 cover of issue #6, by Lupe Backe, original art is here;Archive, "Moonlight Reflections" -- "I was inspired by another colored pencil drawing which got me thinking about cool moonlit nights. It was just another step from there to Jim on a cool moonlit night. Colored pencils on Canson paper, 10/9/00"

Sentry Duty 6 was published in October 2002 and and contains 196 pages. It has a cover by Lupe Backe. 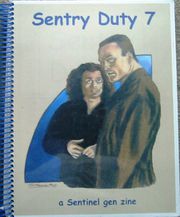 cover of issue #7, by TM Alexander

Sentry Duty 7 has a cover by TM Alexander and contains 198 pages. It was published in 2003. 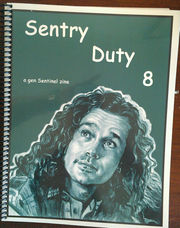 cover of issue #8, by Lorraine Brevig

Sentry Duty 8 was published in May 2004, has a cover by Lorraine Brevig, and contains 210 pages.

Random Reality -- Unique storyline with some wonderful, emotionally charged angst (okay, so angst is always emotionally charged, but this one's done particularly well). I don't want to give away any surprises, but the multiplicity of angst shown in Simon, Blair and Jim was all captured wonderfully. And I truly felt for OC [original character] Adam, as well.

Listen -- Wow! This was another unique story. I wanted to shake Jim and say, "Wake up and listen, fool!" In some ways I couldn't help but think 'But he wouldn't really be so callous, would he?' And then I realized how much more real and human this take paints him out to be. A well done, powerful read!

Believe -- A nice, angsty follow-up to the Alex Barnes incident, combined with the conflict between what Jim believes versus what he's willing to show he believes with regard to otherworldly visitations. As with "Listen," above, this piece also works to make Jim seem more human, flaws and all.

Fetch -- Another story of otherworldly visitations, yet also another unique take. Great Blair-Angst; and although Jim was the one hurt, the comfort went both ways! A very nice friend/partner/soulmate, angsty read!

Ten Seconds -- Okay, this one was short, only 3 pages, but absolutely amazing!! A very hurt Blair shown completely from his own perspective, and the entire thing felt so real to me, and so right, I could almost believe JadeBear experienced the very same horrific situation -- and it truly was a horrific situation. This brief read is an absolute gem! And it reveals a painfully true message: it really does only take "ten seconds to change the world." Brava!

In a Land of Shadow -- This story is long enough to be a novel in its own right, and though it's clearly a crossover piece, I'm not really sure what old British series it's crossing over with. ["The Professionals"] The characters brought in from that other series, shown periodically in screen captures, are shadowy themselves. Obviously part of a shadowy, secret government agency, the reader is given small glimpses of their backgrounds that makes the story, already compelling enough, even more compelling. My lack of knowledge of the crossover show does not hinder the read. In fact, it encourages me to investigate that other series! ;-) I'm only half-way through this story, which occurs shortly after TSbBS, but if I had a choice, I would drop everything today just to finish it. Suspenseful, compelling, and filled with rich characterization, this is another true gem!

(**** Four stars!) All in all, Sentry Duty 8 is a fantastic read, cover to cover! And, no, I am not speaking on behalf of authors, artists or editor of this zine! (big grin) I'm just an innocent bystander who happened to pick up a copy at Media West! [9] 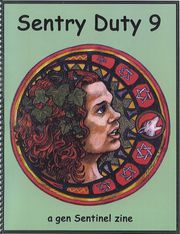 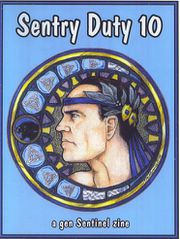 cover of issue #10, by TM Alexander